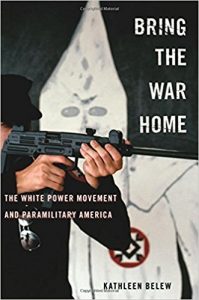 Last year, when neo-Nazis and members of the so called alt-right demonstrated in Charlottesville, Va., many Americans evinced shock that such a thing could happen: A demonstration of the white power movement, in 2017. But it’s only the latest in a history of social activism that goes back decades — and, as Kathleen Belew argues in her new book, Bring the War Home, we ignore that history at our peril. In it, she explains what many disparate events have in common — the war in Vietnam.

The aftermath of warfare has correlated with widespread violence across all groups of American civilians, not just veterans but throughout American society. And in those surges of violence, groups like this have found resurgent memberships.

“It’s called Bring the War Home because that provided the clearest way of thinking about a problem I ran into in the archive,” Belew says, “which is that Klansmen and neo-Nazis committing violence in the United States — ranging from veterans to those who didn’t serve in the war — commonly understood the Vietnam War and invoked the war to describe why they chose the activism they did, and to frame their tactics and their uses of violence in many different contexts.”

Link to Story, Highlights and Audio

NEWNAN, Ga. — A heavily militarized police force of some 400 officers aggressively patrolled a small neo-Nazi rally in this city 40 miles southwest of Atlanta on Saturday and arrested about 10 counterprotesters, many for the crime of wearing a mask.

Police officers arrived before the rally began and approached a group of about 50 anti-fascist protesters. They demanded the protesters remove their masks or face arrest. The officers — who wore bulletproof vests and helmets, and carried semi-automatic rifles — cornered the anti-fascist protesters, then grabbed those who were still masked, tossing them to the ground and handcuffing them.

At one point, an officer pointed what seemed to be a modified AR-15 at the faces of counterprotesters, none of whom appeared to be armed.

The lead officer in the arrests said the counterprotesters were breaking a state law regarding masks, likely referring to a seldom-enforced 1951 law originally aimed at combating hooded Ku Klux Klan members. Anti-fascist protesters ― many belonging to chapters of antifa groups, known for sometimes violently confronting white supremacists ― often wear masks to avoid being identified by both law enforcement and neo-Nazis.

America does not do a good job of tracking incidents of hate and bias. We need your help to create a database of such incidents across the country, so we all know what’s going on. Tell us your story.

Do you have information you want to share with HuffPost? Here’s how.

Learn About & Support The Anti-Hate Work Of The Southern Poverty Law Center, HERE. 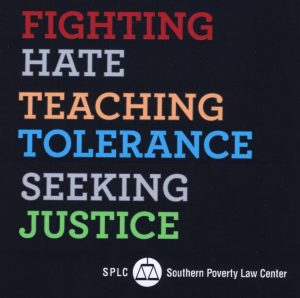