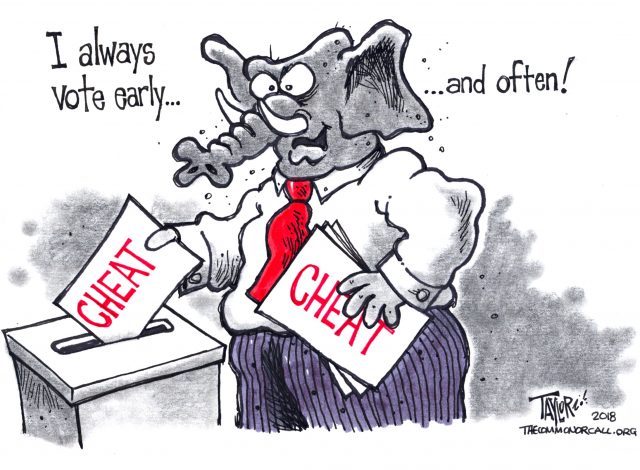 Election officials and Democrats in Wisconsin have repeatedly argued that the state’s strict voter ID law allowed Donald Trump to win the state in 2016 by keeping thousands of voters—predominantly in Democratic-leaning areas—from the polls. Now a top Republican official in the state is saying the same thing.

“We battled to get voter ID on the ballot for the November ’16 election,” Wisconsin Attorney General Brad Schimel, who defended the law in court, told conservative radio host Vicki McKenna on April 12. “How many of your listeners really honestly are sure that Sen. [Ron] Johnson was going to win reelection or President Trump was going to win Wisconsin if we didn’t have voter ID to keep Wisconsin’s elections clean and honest and have integrity?”

Though Schimel said the law would “keep Wisconsin’s elections clean and honest,” the state didn’t present a single case of voter impersonation in court that the law would have stopped.

The law, which went into effect in 2016, required specific forms of government-issued photo identification to vote. In a cover story last year, Mother Jones reported that the law kept tens of thousands of eligible voters from the polls and likely tipped the state to Trump. A federal court found in 2014 that 9 percent of registered voters in Wisconsin did not possess the identification necessary to vote. In a University of Wisconsin study published in September 2017, 1 in 10 registered voters in Milwaukee County and Madison’s Dane County who did not cast a ballot in 2016 cited the voter ID law as a reason why. That meant that up to 23,000 voters in the two heavily Democratic counties—and as many as 45,000 voters statewide—didn’t vote because of the voter ID law. Trump won the state by 22,000 votes.

African Americans, who favored Hillary Clinton over Trump by an 88-to-8 margin, were three times as likely as whites to say they were deterred from voting by the law. …

On Tuesday, New Jersey became the 13th state to adopt automatic voter registration—and the third to do so this year—continuing a trend that has seen blue states expand access to the ballot in an attempt to combat Republican voter suppression efforts. “The ability to exercise your basic right to vote has become a right that’s more important now than arguably any other time in our nation’s history,” Gov. Phil Murphy, a Democrat who was elected last year, told Mother Jones. “Opening democracy up and making it work for as many folks as possible has never been more important.”

Murphy signed the bill, which was passed by the Democratic-controlled Legislature, on Tuesday afternoon at Trenton’s Hughes Justice Complex, which houses the state’s justice system. The new legislation could register nearly 600,000 new voters, according to a study by the Center for American Progress. “It will get a ton more people registered,” said Murphy. “We will be in the top rung of open democracy.”

Eligible voters will now automatically be registered when they obtain or renew a driver’s license, unless they opt out. New Jersey’s secretary of state has the power to expand the law to register people at other state agencies. The law will go into effect in November.

Oregon became the first state to enact automatic registration in 2016, registering 270,000 new voters and seeing the largest turnout increase of any state during the last presidential election. Since then, 12 other states and the District of Columbia have passed or implemented similar laws, with Washington state and Marylandenacting automatic registration this year.

After years of Republican attempts to restrict voting rights, Democratic-controlled states are taking more aggressive steps to expand access to the ballot. According to the Brennan Center for Justice, 514 bills to expand voting access have been introduced this year in 41 states, and 20 bills expanding voting access have passed at least one legislative chamber in 12 states. But the trend is not limited to blue states: Automatic registration has also been passed or implemented in red states like Alaska, Georgia, and West Virginia. …