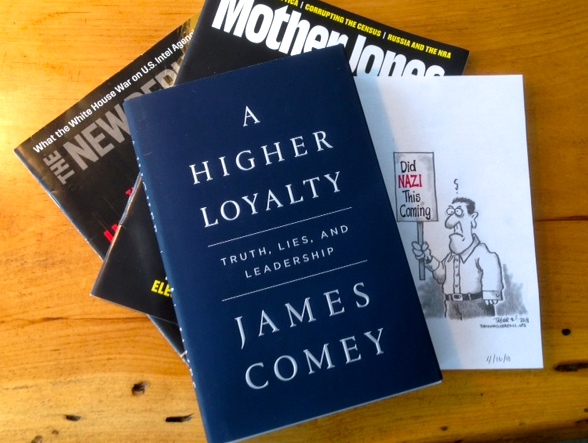 James Comey To ‘Fresh Air’: The FBI Isn’t ‘On Anybody’s Side’

It’s been almost a year since since James Comey first learned that President Trump had fired him. The former FBI director was in Los Angeles visiting the field office for a diversity event when a ticker announcing his ouster scrolled across the bottom of a TV screen.

“I thought it was a scam,” Comey says. “I went back to talking to the people who were gathered in front of me.”

He pulled me down as far as he could and then he put his lips by my right ear, which obscured them from the camera. What he said was, “I really look forward to working with you.”

But it was true. Comey later told the Senate intelligence committee that he believed he had been fired for leading the FBI’s investigation into Russian interference in the election and potential ties between the Trump campaign and Russia. But Trump gave conflicting reasons for the dismissal — including the claim that Comey had mishandled the investigation into Hillary Clinton’s private email server that she used as secretary of state.

Now Comey shares his story in his new memoir, A Higher Loyalty. In it, he explains his handling of the Clinton investigation and sounds the alarm about the Trump presidency. He also defends the FBI against charges of partisanship. …

Read the Rest and 43-Minute Audio