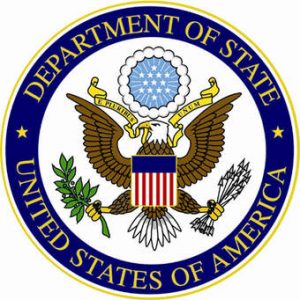 DEMOCRATIC ACTIVISTS AROUND the country have become energized by the nomination of Mike Pompeo as the new secretary of state, kicking off a bout of organizing around foreign policy that has little precedent outside the lead-up to an imminent invasion.

The question now is whether that enthusiasm will transfer to Senate Democrats themselves, or whether they will usher him through as they did in January 2017 when he was confirmed as CIA director. Senate Minority Leader Chuck Schumer, D-N.Y., voted to confirm Pompeo last year.

Pompeo, a committed Islamophobe and war hawk, has galvanized opposition particularly for his hostility to the Iran nuclear deal, which Democrats see as a signature piece of the legacy of former President Barack Obama. Ripping up the deal, its advocates warn, would march the United States down a path that leads inevitably to war.

Pompeo, who previously represented Kansas in Congress, will appear before the Senate Foreign Relations Committee on Thursday, where Republicans hold a one-member advantage. But with Sen. Rand Paul, R-Ky., having already announced his opposition, that means a united Democratic front could reject Pompeo in committee.

A nominee can still be brought to the floor for a vote despite having been shot down in committee, but nobody has been successfully confirmed that way in at least 40 years. The last to try, coincidentally, was John Bolton in 2005, when the committee recommended against his appointment as U.N. ambassador. He was filibustered on the floor and ultimately snuck through as a brief recess appointment.

A loss in committee could make it easier for moderate Democrats to vote against Pompeo, argued Elizabeth Beavers, who handles national security and foreign policy for Indivisible, a syndicate of grassroots chapters that came together after the 2016 election to resist the Trump agenda. “It would change the calculus for senators on the floor,” said Beavers. Republicans would need every vote, including the ailing Sen. John McCain, R-Ariz., merely to get to a place where Vice President Mike Pence could break a 50-50 tie, if Democrats unite against Pompeo. (The National Interest has reported that not only will McCain vote, he will vote no.)

That Pompeo was nominated along with Gina Haspel has only added fuel to the opposition. Haspel, deputy director of the CIA, has been named to head the agency, but she was intimately involved with the Bush administration’s torture program. (Her confirmation hearing is expected to be scheduled later this month.) The selection of the uber-hawk Bolton to be national security adviser one week after Pompeo and Haspel’s nominations frightened people into action, said Stephen Miles, director of Win Without War. “When Donald Trump hired John Bolton, the fight over Mike Pompeo went from being about just another terrible Trump nominee to potentially the difference between going to war or not,” he said. “What we’re hearing from our activists and our partners are that people are fired up.” (Bolton’s first day in the White House was Monday.) …

The Gall! Pompeo Asks Clinton & Kerry For Advice & Help As He Preps For Confirmation Battle

(Editor’s Note: Lest you think there is any fundamental difference between the republican and democratic establishment when it comes to wars of corporate profit and greasing the wheels for international business, forgetaboutit! — Mark L. Taylor)

As a sharply partisan Republican member of Congress, CIA Director Mike Pompeo tormented former Secretary of State Hillary Clinton over her response to the deadly 2012 attacks in Benghazi, Libya, which Pompeo called “morally reprehensible.” He also once liked a tweet that branded her successor, John Kerry, a “traitor.”

But now that Pompeo faces a tough confirmation process to become secretary of state himself, he has reached out to Clinton and Kerry, as well as every other living occupant of the office, to ask for guidance. Clinton, for one, has been willing to help.

“These were lengthy calls seeking advice” from the former secretaries, a person familiar with Pompeo’s prep work told POLITICO. “He understands the gravity of the challenge before him.”

After a House committee found no evidence of wrongdoing by Clinton, Pompeo and a colleague issued an addendum alleging that the State Department was “seemingly more concerned with politics and Secretary Clinton’s legacy than with protecting its people in Benghazi.”

While juggling his day job at the CIA, the person said, Pompeo has been participating in briefing sessions at the State Department, reading thick stacks of material, much of it country-specific, and participating in mock Q&As to prepare for a sure-fire grilling before U.S. senators. He’s also talking to a range of people at the State Department, including career civil and foreign service staffers who felt sidelined under former Secretary of State Rex Tillerson.

It’s part of Pompeo’s mixture of crash course and charm offensive as he prepares for a Thursday confirmation hearing before a closely divided Senate Foreign Relations Committee. Although no one thinks Pompeo has had a political conversion, he seems determined to gain some Democratic votes — and demonstrate more respect for his predecessors and future employees than did Tillerson, who never spoke at length to either Kerry or Clinton and who alienated his department’s rank and file.

Former U.S. officials say that — in both his confirmation hearing and in the job, if he is confirmed — Pompeo will have to find a way to get along with both Donald Trump and a diplomatic crew that the Republican president disdains.

“Pompeo’s most challenging task is to keep the trust of the president while also earning the trust of the State Department bureaucracy,” said Ilan Goldenberg, who served at State in the Obama administration. “If he is too hard-line and ideological, he will not earn the trust of the diplomats and won’t be an effective negotiator and spokesman on the international stage. But he also has to avoid the perception that he has been co-opted by the ‘softies’ at Foggy Bottom or he’ll lose influence in the West Wing.” …

Read the Rest and 9-Minute Audio