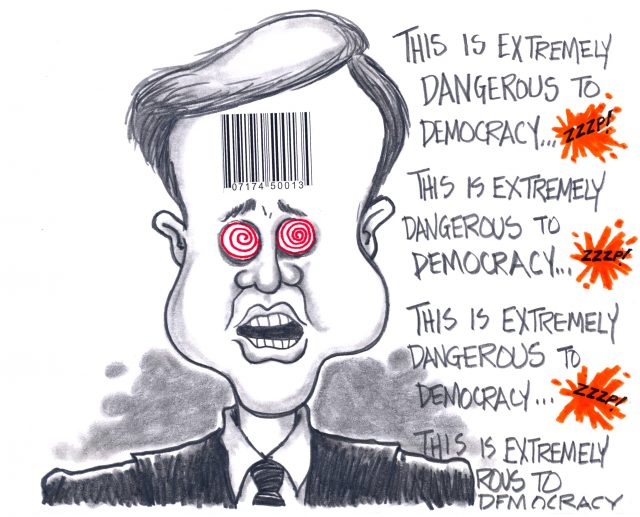 Earlier this month, CNN’s Brian Stelter broke the news that Sinclair Broadcast Group, owner or operator of nearly 200 television stations in the U.S., would be forcing its news anchors to record a promo about “the troubling trend of irresponsible, one sided news stories plaguing our country.” The script, which parrots Donald Trump’s oft-declarations of developments negative to his presidency as “fake news,” brought upheaval to newsrooms already dismayed with Sinclair’s consistent interference to bring right-wing propaganda to local television broadcasts.

You might remember Sinclair from its having been featured on John Oliver’sLast Week Tonight last year, or from its requiring in 2004 of affiliates to air anti-John Kerry propaganda, or perhaps because it’s your own local affiliate running inflammatory “Terrorism Alerts” or required editorials from former Trump adviser Boris Epshteyn, he of the famed Holocaust Remembrance Day statement that failed to mention Jewish people. (Sinclair also owns Ring of Honor wrestling, Tennis magazine, and the Tennis Channel.)

The net result of the company’s current mandate is dozens upon dozens of local news anchors looking like hostages in proof-of-life videos, trying their hardest to spit out words attacking the industry they’d chosen as a life vocation. …

Invitation From Dead Spin: If you’re a Sinclair employee who has something to say—anonymity guaranteed on request—let me know or use our anonymous SecureDrop.

Invitation From Timothy Burke of The Concourse/Deadspin: If you’re a Sinclair employee who has something to say—anonymity guaranteed on request—let me know or use our anonymous SecureDrop.