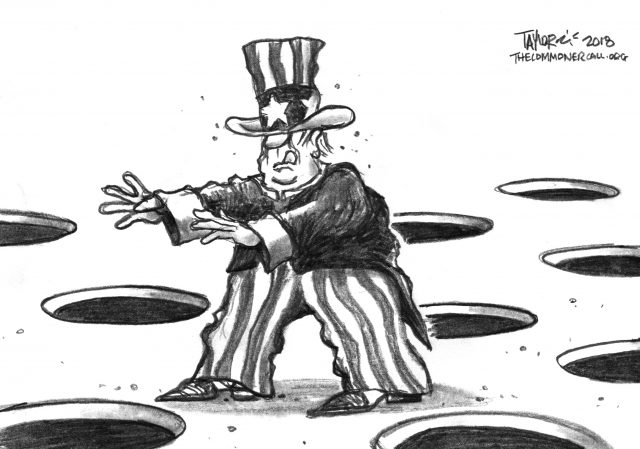 When no one is held accountable the same thing will happen again.

Fifteen years since the start of the Iraq War, we live in what many see as a fresh hell: the erosion of institutions and standards at the highest levels. But political science professor Corey Robin argues that the Trump era is merely an extension of the same reflex that gave us the Iraq War — and much that preceded it. Robin recently wrote a piece for Harper’s Magazineabout the American tendency to re-imagine the past [See below]. He and Brooke discuss our collective failure to draw connections between Trump and what came before, and how it forms part of a longer pattern of forgetting in American culture.

Link to Story and 10-Minute Audio

Last Week’s ‘On The Media’ Provides One Of The Best Overviews Of The 15th Anniversary Of The Iraq War Crime To Be Found. Link to 52-Minute Audio

How Did We Get Here? Forget About It

In the uneasy months following 9/11, the Bush Administration provoked a minor controversy when it announced the name of a new office dedicated to protecting the United States from terrorism and other threats. “Homeland security” had unsavory associations: the Nazis often spoke of Heimat, which was also used in the 1920s and 1930s by an Austrian right-wing paramilitary group, the Heimwehr or Heimatschutz. Even Donald Rumsfeld, Bush’s secretary of defense, who had been in discussions about the term months before its introduction, had been discomfited. “The word ‘homeland’ is a strange word,” he wrote in a memo on February 27, 2001. “ ‘Homeland’ Defense sounds more German than American.” Barbara J. Fields, a historian at Columbia University, predicted in 2002 that the term would “remain a resident alien rather than a naturalized citizen in American usage.”

Seventeen years and a television series later, “homeland” no longer unsettles. The Department of Homeland Security has a $40 billion budget, 240,000 employees, and a Cabinet seat. Last summer, as journalists, academics, and intellectuals debated whether a fascist had invaded the White House, a bill reauthorizing DHS sailed through the House of Representatives by a bipartisan vote of 386 to 41. The phrase has found a home in the United States. It is a naturalized citizen.

Telling a story of how present trespass derives from past crime or even original sin can inspire a more strenuous refusal, a more profound assault on the now. It can fuel a desire to be rid of not just the moment but the moments that made this moment, to ensure that we never have to face this moment again. But only if we acknowledge what we’re seldom prepared to admit: that the monster has been with us all along.

One of the benefits of turning fifty, which I did in November, is that your memories become useful in unexpected ways. Throughout most of the Bush years, I was in my thirties — old enough to remember a time when there wasn’t a Department of Homeland Security, young enough to feel the novelties of the era. Middle age provides you a different perch. You get to watch, in real time, the shock of the new get absorbed by the soft cushions of the American tradition.

When Bush left office in 2009, he was widely loathed, with an approval rating of 33 percent. Today, 61 percent of the population approves of him, with much of that increase coming from Democrats and independents. A majority of voters under thirty-five view him favorably, which they didn’t while he was president. So jarring is the switch that Will Ferrell was inspired to reprise his impersonation of Bush on Saturday Night Live. “I just wanted to address my fellow Americans tonight,” he said, “and remind you guys that I was really bad. Like, historically not good.”

This is how a member of the younger generation viewed Bush in 2003, after the United States had invaded Iraq on the basis of false claims that the country possessed weapons of mass destruction:

The damage to this country and our body politic is staggering. . . . For our Government to be lying to us as they invoke our ideals in their rhetoric sickens me to the core of my being. It means something has gone so rotten. . . . It’s the bile you swallow in the back of your throat but keeps rising back up. It is a pattern, a pattern of cruelty, trickery, deceit, crass politics, and manipulative actions. It’s something that I can no longer ignore and it is absolutely shattering my optimism. . . . And that is a terrible thing, when our Government destroys the idealism of our young.

Strong stuff, suggesting the kind of experience you don’t easily recover from. If such feelings of betrayal don’t overwhelm you with a corrosive cynicism, inducing you to withdraw from politics, they provoke an incipient realism or an irrepressible radicalism. The Gulf War, which happened when I was twenty-three, set me on the latter path, guided, I’d like to think, by some sense of the former. But whether one opts for realism or radicalism or both, such great disillusionment would seem to preclude making statements like this, fifteen years later:

I’ve never seen anything as cynical in politics as Republicans spending four months refusing to reauthorize the Children’s Health Insurance Program, then attaching reauthorization to another controversial bill, then blaming Democrats for not supporting CHIP. It’s breathtaking.

You get to lose your innocence only once. But Ezra Klein, the author of both these statements, loses his every night as he scans the day’s report of the latest Republican Party outrage. American liberalism is also a party of the born-again. …