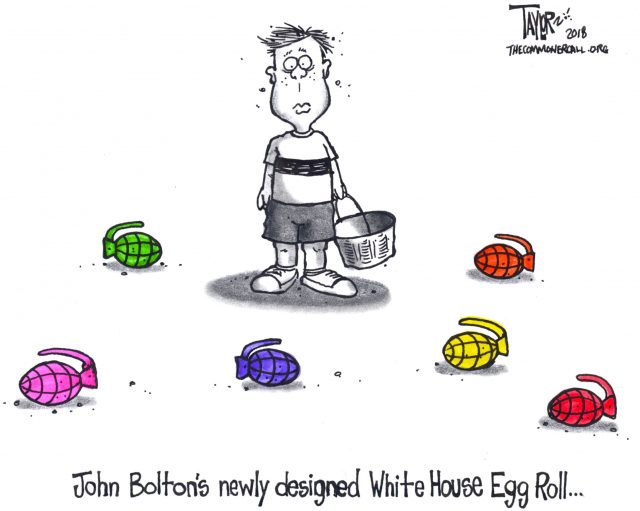 “I confess I had no desire to die in a Southeast Asian rice paddy… I considered the war in Vietnam already lost.”
— John Bolton, 1995

The funny thing about relentlessly pressing for more war in America is that a lot of the most zealous warhawking politicians and pundits over the years — left and right — leaned on their privileges to avoid being touched personally by war. Dick Cheney never met an oil-rich Middle Eastern nation whose ground he didn’t want to siphon, but he had “other priorities” when Vietnam rolled around. Bill Clinton — the comparative “dove” who still managed to deploy U.S. power to the Balkans, the Horn of Africa, Haiti, and Sudan — also pulled strings to sidestep the ’Nam draft, as did current POTUS Donald Trump, whose bone spurs may have precluded wartime service, but not weaponized tweeting.

In this pantheon of chickenhawking old guys with money and power, few hawk harder than John Bolton, the incoming national security adviser, whose appointment is freaking out even level-headed wonks with a high tolerance for overseas power projection. Bolton’s politics gel with those of a lot of military hard-chargers: He believes dearly that blood makes the grass grow. First-strike on North Korea? Do it. First-strike on Iran? Do it now. Do it brusquely, with straight talk!

With Bolton coordinating White House security strategy, there are likely to be plenty of new chances to lose. Not for him, obviously; just for the troops he supports so dearly, at a safe remove.

The distinction is, unlike the troops whose deployments he’ll have enormous sway over, John Bolton won’t brook the idea of his blood gurgling on any battlefield, especially in a losing effort. Bolton, it turns out, is known for bolting when the gun bolts start cycling.

The Yale Daily News reported more than a decade ago how Bolton articulated his “war for thee, but not for me” values to his classmates when their 25th reunion came around in 1995:

“Though Bolton supported the Vietnam War, he declined to enter combat duty, instead enlisting in the National Guard and attending law school after his 1970 graduation. “I confess I had no desire to die in a Southeast Asian rice paddy,” Bolton wrote of his decision in the 25th reunion book. “I considered the war in Vietnam already lost.””

A lot of people considered the the Vietnam War already lost in 1970 — including a lot of Americans who, you know, actually had to serve there. But Bolton is a special case: He’d spent his time in college literally cheerleading for moar war. “The conservative underground is alive and well here,” he reportedly said as a student in a public campus debate over Vietnam; “if we do not make our influence felt, rest assured we will in the real world.”

When the real world came knocking? Bolton said nuts to that, later writing in a memoir that he “wasn’t going to waste time on a futile struggle” in Vietnam. (The memoir’s title, by the way, is Surrender Is Not An Option.)

Now, joining the Guard isn’t nothing, especially not today, when OCONUS deployments are ever more common for weekend warriors. But in the Vietnam era, it was a time-tested means of avoiding wartime deployment, popular among the well-connected, and Bolton understood this well; he admits this was his calculus for joining in his memoir: “Dying for your country was one thing, but dying to gain territory that antiwar forces in Congress would simply return to the enemy seemed ludicrous to me.” …

It’s one thing to finagle a way to avoid military service but it is quite another to do so while calling for the children of others to go fight in a useless war. When it was his generation told to jump in the breech Bolton assessed the Vietnam war already lost; a lost cause that he continued to publicly support. He went into the National Guard, which, in those years, was a free pass out of harms way. George W. Bush did the same thing.

Now, 15 years after the onset of the disasterous Cheney/Bush war Bolton declares the Iraq War a good decision. Seventeen years and thousands of Americans dead, maimed and psychologically harmed and upwards of a half-million dead in Iraq and extremism rolling outward from Iraq and STILL no peace in Iraq. But it’s all good for John Bolton. It is also all good to send your children into yet another stupid, useless war for corporate profits. Bolton is the poster loser for flag waving neocon warmongering done with the blood of other people’s children.

It is far, far beyond hypocrisy. It is evil.

Watch: A Brief History Of John Bolton Calling For War

These were some of the words used by columnists and foreign policy experts when President Trump named John Bolton to succeed H.R. McMaster as National Security Adviser.

The reason for the alarm is Bolton’s stated worldview, as aggressively nationalistic as it is hawkish. He has cheered U.S. military actions in Iraq, Afghanistan, Libya and Syria. At the same time he has lamented that we have not taken similar actions aimed at “regime change” in Iran, Syria, and North Korea.

But Bolton has voiced at least three criticisms of U.S. military operations in the past two decades: They didn’t start soon enough, they didn’t last long enough, and some were waged with the aim of saving civilians in other countries, not with the explicit goal of furthering U.S. interests.

Here is a sampling of the many, many times John Bolton has evangelized for war. …