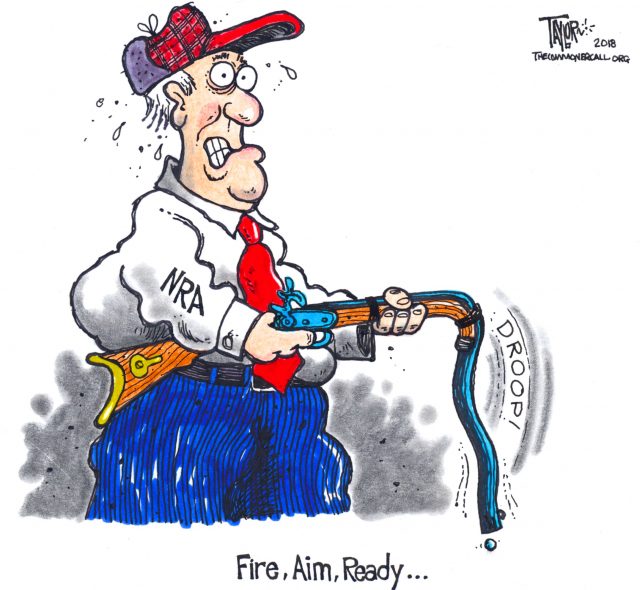 ur national debate about guns is over. It ended in a dark movie theater in Aurora, Colorado, and at an outdoor concert in Las Vegas. It ended in a first grade classroom in Connecticut and at a high school in Florida. It ended a thousand times on the streets of Chicago, or Baltimore, or Memphis, with a thousand grieving mothers who never got invited to come onto cable television.

It ended the last time a child found his daddy’s gun and killed his sister in their living room. It ended the last time a person in crisis found a handgun. It ended when a bunch of high school students, who didn’t know any better, decided that they could no longer trust the adults to protect them. It ended on a day in March when millions of ordinary Americans, angry and frustrated and mourning, took to their streets to declare it over.

Every day brings a new tragedy and so all these brave, determined mothers and sisters and daughters and aunts and grandmothers will be reminded every day from now until November what’s at stake: the lives of their children.

There is no going back from what happened this weekend. There is only the question of how far and how fast the change will come. If the people who marched on Saturday vote—and why wouldn’t they—the National Rifle Association and its lackeys in Congress and state legislatures around the country have no chance this November and beyond.

NRA bluff has been called

For those craven politicians, elected and re-elected on the blood of innocents, beholden to an organization that long ago betrayed its founding principles, forever contorting law and logic to justify assault rifles for teenagers and peanuts for gun research, the game is over, the bluff’s been called. You can only fool so many people for so long.

Saturday was about passion and about the expression of grief, but the movement right now, the latest iteration of it, is about the numbers as much as anything. The gun lobby is losing whatever real constituency it ever had, one act of gun violence at a time. In the past 20 years alone, hundreds of thousands of teenagers and young adults have had direct experiences with school shootings and they are refusing to allow their own children to be as traumatized as they were. …

NRA Says It Receives Foreign Funds, But Claims None Goes To Election Work

The National Rifle Association acknowledged that it accepts foreign donations but says it does not use them for election work — even as federal investigators look into the role the NRA might have played in Russia’s attack on the 2016 election.

Pressure on the organization has also been increased by a McClatchy report that suggested that the FBI had been investigating whether a top Russian banker with Kremlin ties illegally funneled money to the NRA to aid Donald Trump’s campaign for president. The Federal Election Commission has also opened a preliminary investigation into this question.

The NRA is not required to be transparent about how money moves among its various political entities, and this leaves questions unanswered about how these foreign funds were ultimately spent.

While the NRA claims it does not receive foreign money for election purposes, the movement of its money among accounts could make it difficult, if not impossible, to track how the money is spent since it is not isolated or sequestered.

In the context of ongoing investigations, Sen. Ron Wyden of Oregon, the top Democrat on the Senate Finance Committee, wrote to the NRA earlier this month asking, “Can you categorically state that your organizations have never, wittingly or unwittingly, received any contributions from individuals or entities acting as conduits for foreign entities or interests?”

The NRA said it does receive foreign money but not for election purposes.

“While we do receive some contributions from foreign individuals and entities, those contributions are made directly to the NRA for lawful purposes,” NRA’s General Counsel John C. Frazer wrote to Wyden in a letter obtained by NPR. “Our review of our records has found no foreign donations in connection with a United States election, either directly or through a conduit.”

In 2015 to 2016, Frazer continued, the NRA received money from companies based in the U.S. that may be owned or managed by foreign nationals. “However, none of those entities or individuals is connected with Russia, and none of their contributions were made in connection with U.S. elections,” Frazer added.

The NRA’s response was not sufficient for Wyden. In a letter dated March 27, the senator demanded that the organization provide a detailed accounting of how foreign funds were used over the past three years, whether they were targeted at particular American audiences and what the measured impact was.

Wyden also demanded to know whether any Russian nationals or foreign individuals had been members of the NRA’s donor programs and whether the NRA received any money from sanctioned individuals. …