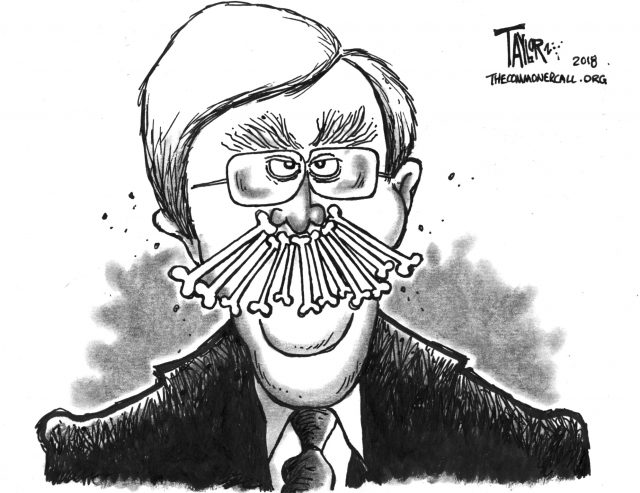 (CNN) News outlets have reported that President Donald Trump has decided to replace his national security adviser, H.R. McMaster. Trump was supposedly waiting to announce the decision until he could find a good next posting for McMaster, who remains an active-duty Army general.

The rationale was that this would be more dignified for McMaster. But of course, leaking the news of his imminent firing had the opposite effect. And it not only humiliated the general, it also undermined the effectiveness of the entire US national security apparatus at an extremely sensitive time when we face complex challenges involving North Korea, Iran, Russia and many other issues.
This being the Trump administration, this vitally important decision was undertaken with all the calm discipline of a “Ren and Stimpy” cartoon.
The truth could be, for example, that one of the main reasons no announcement was made is that while Trump knew he wants the independent-minded McMaster gone, he didn’t know who he wanted to replace him.
He has now selected John Bolton, former US ambassador to the United Nations. Bolton has distinguished himself as one of America’s most hawkish and ineffective diplomats for decades. He is known as an architect of the Iraq War, an enemy of multilateralism and foe of the United Nations, where he served during the George W. Bush administration through a recess appointment when he could not win Senate confirmation. He is also a harsh critic of the Iran nuclear deal and of North Korea, and is seen as someone who might promote conflict in both cases.
Few prominent national security figures are as ill-suited to the job of national security adviser as Bolton when you consider his views, his temperament and his ability be an honest broker. In fact, he is actually one of the few people on earth who would be worse than Mike Flynn, who was the worst national security adviser of all time.
That said, in Trumpland even the most outrageously grim developments have an absurdist subtext. In Bolton’s case, this was illustrated by a tweet from CBS News’ Jacqueline Alemany: “Just asked a source close to the White House if John Bolton’s mustache will go if he replaces McMaster as National Security Advisor. Source doesn’t think the ‘stache will go but call it a ‘sensitive subject.’ “
That such a thing is even being discussed because of Trump’s predilection for clean-shaven aides and people who “look the part” reminds us just how off the rails we have gone.
Having reviewed the available options and the nation’s national security needs, if Bolton’s famed mustache must go, I would strongly support it for the job over him. …
Read the Rest
(Commoner Call Cartoon by Mark L. Taylor, 2018. Open source and free to use with link to www.thecommonercall.org )

President Trump has tapped John Bolton to become his next national security adviser, replacing H.R. McMaster. Bolton is known for his ultra-hawkish views. He has openly backed war against Iran and North Korea, and was a prominent supporter of the U.S. invasion of Iraq. Just three weeks ago, Bolton wrote an article for The Wall Street Journal titled “The Legal Case for Striking North Korea First.” In 2015, while the Obama administration was negotiating the Iran nuclear deal, Bolton wrote a piece titled “To Stop Iran’s Bomb, Bomb Iran.”

We speak to longtime investigative reporter Gareth Porter. His new piece for The American Conservative is titled “The Untold Story of John Bolton’s Campaign for War with Iran.”