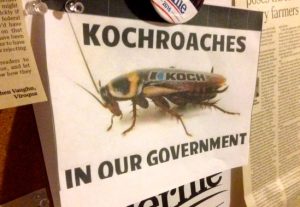 “Donald Trump has now somehow picked someone even worse than Rex Tillerson to run the State Department,” said Greenpeace USA Climate Director Naomi Ages in a statement.  “In addition to being a climate denier, like his predecessor, Pompeo is the Koch brothers’ shill who will denigrate the United States’ reputation abroad and make us vulnerable to threats at home.”

The former congressman and current CIA director’s climate denialism and praise of the United States’ use of torture has raised alarm among green groups and human rights defenders.

“We’ve gone from Exxon’s CEO to the Koch Brothers’ most loyal lapdog,” said Boeve in a statement. “Pompeo received over a million oil and gas dollars during his political career, has deep ties to the Kochs, and is a climate denier to the core. Trump’s State Department is a vehicle for big oil and billionaires, regardless of whether Tillerson or Pompeo are at the helm.”

Corporate Accountability also raised concerns over Pompeo’s close ties to billionaire Republican donors Charles and David Koch, who donated more to his 2010 congressional campaign than they did to any other candidate. Pompeo returned the favor by hiring a Koch Industries attorney as his chief of staff and introducing legislation that was friendly to the multinational corporation.

“If confirmed, Charles and David Koch will now have a direct line to the State Department, including its already obstructionist positions at the U.N. Climate Treaty,” said Kelle Louaillier, the group’s president, on Tuesday. “At the next round of the treaty negotiations, the U.S. delegation may as well be called the Koch delegation, as their agenda—dirty fossil fuels—will again be the centerpiece of U.S. climate policy.”

“We urge the Senate to reject his nomination,” said Hauter.

In addition to Pompeo’s record on environmental issues, the CIA director is known as a relentless war hawk, specifically against Iran, and has backed some of the agency’s most serious human rights abuses in recent years, including its torture regime under President George W. Bush and the drone program that has killed countless innocent civilians.

He’s spoken  in favor of “rolling back” the Iran nuclear deal, despite strong international support for the 2015 agreement.

Pompeo has also said that Guantanamo Bay should remain open as a prison for detainees in the War on Terror, arguing that closing the detention center, which rights groups say has violated the human rights of detainees since it was opened in 2002, could give way to “endless litigation and rights expanded well beyond those afforded to enemy combatants.”

Pompeo’s foreign policy record has proven him to be “a loose cannon who acts before he thinks,” said Vincent Warren, executive director of the Center for Constitutional Rights (CCR), in a statement. “He, too, has defended and endorsed torture and characterized those complicit in the CIA torture program as ‘patriots.'”

Pompeo’s confirmation hearing is scheduled to take place next month.

(This work is licensed under a Creative Commons Attribution-Share Alike 3.0 License.)
Link to Story
(Commoner Call photo by Mark L. Taylor, 2017. Open source and free to use with link to www.thecommonercall.org )