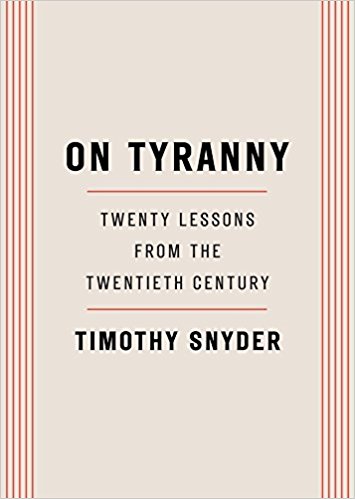 With all chaos and change swirling through Washington DC and tugging back and forth with Moscow it is easy to feel lost and confused and uncertain as to just what the hell is going on. In this series of short video talks Yale historian Timothy Snyder brings sense out of chaos and knits together an understanding of the patterns and personalities redefining our world and lives.

Snyder is an expert on 20th century totalitarian regimes. His 2017 book “On Tyranny: Twenty Lessons From The Twentieth Century” is an essential owners manual for anyone living in Trump’s Amerika. You can link to the list of 20 lessons here.

The total time for all the videos below is 2 hours and 17 minutes. I strongly encourage Commoner Call readers to watch each of them over a period of several evenings to get a better understanding of what is happening and how we need to respond to the growing threat of fascist domination of the nation.

This series is so important it will posted to the Commoner Call over the next few editions.

In the first episode of “Timothy Snyder Speaks,” historian and author Timothy Snyder discusses the lessons American citizens can take from the year since the “Russian cyber-victory over the United States.”

Snyder is a historian and professor at Yale University, specializing in Eastern and Central Europe, totalitarianism, and the Holocaust. His books have received widespread acclaim nationally and internationally from both academic and general audiences. His most recent book, “On Tyranny: Twenty Lessons from the Twentieth Century,” explores the small, everyday ways a citizenry can resist the encroachment of government tyranny. He is also the author of “Black Earth: The Holocaust as History and Warning” and, forthcoming in April, “The Road to Unfreedom: Russia, Europe, America.”

In the 2016 presidential elections, America defeated itself. The Russian intervention, intelligent as it was, could only work because of our own failures: in media, in democracy, and in social justice. In the second episode of “Timothy Snyder Speaks,” historian and author Timothy Snyder shows what the Russian attack can teach us about ourselves.
Link to 23-Minute Video

Episode Three: What Is Oligarchy?

What does oligarchy mean? In the third episode of “Timothy Snyder Speaks,” historian and author Timothy Snyder explores the meaning of oligarchy, where it came from, how it endangers us — and how it connects the United States and Russia.
Link to 16-Minute Video

(Editor’s Note: Snyder explains why Trump gets away with pushing policies that harm his lower clas supporters and why they will remain loyal in their pain. — Mark L. Taylor)
Sadopopulism: how America can be governed without policy and with pain. A guide to the logic of the Senate tax plan.
Link to 12-Minute Video
*****

Too often these days invoking the name of Jesus or claiming Christian religion has become an escape from responsibility for plainly un-Christian behavior. Are Christians forgiven for everything because they find ways to blame others for their own actions? Perhaps the meaning of Christmas is something else, extending an idea of the good rather than defending what is plainly bad, and perhaps a Christmas greeting is a way to affirm others rather than claiming all righteousness for ourselves. Merry Christmas.

America First is not a foreign policy and it’s not a domestic policy. It creates a vacuum of power filled by China, and a vacuum of values filled by Europe. It breaks the rules without proposing new ones. And so in the end puts Americans last.

“America First” brings both political weakness and moral hazard. The last episode was about America’s new weakness in the world. This one is about how “America First” leads Americans to turn against one another.

In 2016 Russia defeated the United States in a cyberwar, selecting the president of the United States. Since that victory, Russia continues its campaign in the dark corridors of cyber, colonizing us at every turn: from the Nunes memo to the Parkland shootings. Cyber-colonization can be resisted but first it must be understood.

Episode Nine: Reporters – the Heroes of Our Time

“Everything good we take for granted in a free society depends upon factuality. Without reporters we don’t have factuality.” Without the people who seek facts, we can forget about justice, freedom, and equality. Timothy Snyder is a historian at Yale University, specializing in eastern Europe, totalitarianism, and the Holocaust. His books have received widespread acclaim.

Please Pass This Important Series On To Your Contacts!