There was a consensus among the crowd at Congressman Kind’s listening session last week [2/12] in La Crosse: The U.S. health care system needs radical change, and a Medicare for All system, as proposed in HR 676 “The Expanded and Improved Medicare for All Act,” is the best way forward. Even Rep. Kind admitted “it’s an aspiration I share,” but he expressed some concerns about the bill. I will address those concerns below.

But first, what is Medicare for All, as laid out in HR 676? Medicare for All (also known as single-payer health care) would establish a universal, publicly funded insurance system that would cover all medically necessary care: primary care, hospital, preventative care, long-term care, mental health, dental, vision, prescription drugs and more. Patients would regain free choice of doctor and provider, and doctors would regain autonomy over care. Care would be provided at no charge at the point of service: just hand over your Medicare card, and get the care you need. No more premiums, co-pays or deductibles. Most medical providers would remain private, so this is not “socialized” medicine.

Kind mentioned the disparity in Medicare reimbursement rates, where providers are paid disparate amounts for providing the same services. HR 676 directly addresses this problem in Section 206 of the bill, mandating annual reviews of reimbursement levels across states and regions. This process would be open to democratic oversight and public comment.

If Kind would renounce campaign contributions from the private insurance and pharmaceutical industries, we could trust he is approaching the issue with his constituents’ best interests at heart. So Congressman Kind, here is our proposal: If you co-sponsor and build support for the Medicare for All bill, and renounce industry money, we will tirelessly work by your side to build support and momentum among the citizens of your district.

Kind’s concerns about controlling health care costs would also be tackled by HR 676 in numerous ways. First and foremost, the bloated bureaucratic waste of corporate health insurance would disappear. Up to 30 percent of private premiums go to administration, compared to 3 percent under Medicare and 1 percent under Canada’s Medicare system. This would save an estimated $400 billion in the first year alone.

Furthermore, in Section 205 of the bill, a Medicare for All system would be empowered to negotiate prices for drugs, medical supplies and equipment. The Veterans Administration system already enjoys this benefit, and sees a 40 percent discount on drug prices because of its buying power.

Why would Americans who receive health insurance through their work want a Medicare for All system? According to the Kaiser Foundation, only 45 percent of U.S. firms offered coverage in 2016, down from more than 50 percent in 2012. It is a sad reality of our economy that most new jobs pay low wages and offer few benefits. Even a good employer-provided plan will do you no good if you get chronically ill and cannot keep working. Or what if your workplace closes, or your job is outsourced? Remember, employers take health benefits out of worker compensation, so a publicly financed system could leave workers in a better position to demand the higher wages they deserve.

But finally: how would we pay for it? In 2016, the average American family paid more than $6,000 in health care premiums and deductibles to private insurance companies. Under a Medicare for All system, a family of four earning $50,000 a year would pay $466 in tax for single-payer coverage. And that coverage would be comprehensive: full medical, dental, vision, etc. So yes, your taxes may go up under a Medicare for All plan. But the savings ($5,800 per family average a year) would be more than offset by Americans banding together into one universal system. Additional funding would be provided by progressive taxation on the wealthiest Americans and corporations, who have been freeloading on the backs of working people for too long.

The House and Senate both have draft Medicare for All plans that have been introduced, and they do have some differences in how they would fund and administer the plan. This is where we see Rep. Kind being able to exert a strong impact. As a long-serving and well-respected member of the House, Kind could use his position to improve and reconcile the two bills, and bring more politicians on board. The majority of House Democrats have already signed on, so the wind is at our back. Additionally, if Kind would renounce campaign contributions from the private insurance and pharmaceutical industries, we could trust he is approaching the issue with his constituents’ best interests at heart.

So Congressman Kind, here is our proposal: If you co-sponsor and build support for the Medicare for All bill, and renounce industry money, we will tirelessly work by your side to build support and momentum among the citizens of your district.

We will put boots on the ground in our communities, to spread the word about Medicare for All. This is a national movement, and we want to work with you to build an affordable, efficient and democratically accountable health care system that works for all of us.

We look forward to your response.

(Evan Dvorsak of Viroqua represents the Wisconsin Health Justice Campaign, a group of citizens in Vernon and Crawford counties who have been hosting forums on Medicare for All in recent months. You can learn more at wisconsinhealthjusticecampaign@gmail.com.) 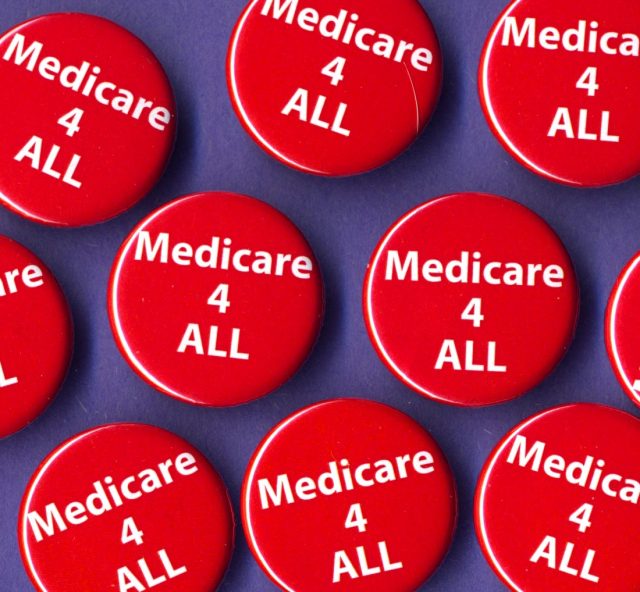 Show Your Support For A Caring & Compassionate America 4 All

(Commoner Call cartoon and photos by Mark L. Taylor, 2017. Open source and free to use with link to www.thecommonercall.org )