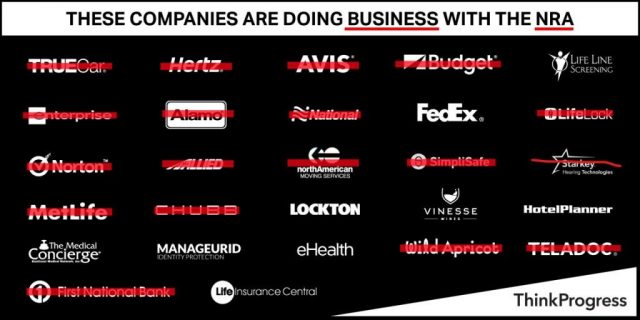 The list above shows a growing number of companies severing their links with the NRA by ending their discounts to NRA members — discounts that had been used by the NRA to promote membership. Yesterday, Delta, United, Best Western Hotels ended their relationships as well.

Unfortunately, FedEx, eHealth, Life Line Screening, and a few others continue to collaborate with the NRA. You might consider ending your own business dealings with these NRA collaborators. #BoycottNRA

Students are also asking that tourists boycott Florida when it comes to taking a vacation, until Florida lawmakers pass sensible gun laws. As Sana says, below, a call to boycott Florida’s $100 billion + tourism industry is pure genius.

By the way, you might also consider severing your links to members of Congress who take money from the NRA.

More than two dozen companies have cut ties with the National Rifle Association (NRA) in recent days, having come under scrutiny for doing business with the gun lobby following the school shooting in Parkland, Florida, which left 17 people dead earlier this month.

But FedEx has refused to cut ties with the association, and a confidential company document obtained by ThinkProgress detailing the courier service’s relationship with the firearms industry may explain why.

The courier service has publicly tried to distance itself from the NRA, saying in a statement Monday that, despite providing a discount to the NRA’s business alliance, it disagrees with a number of the NRA’s policy positions.

While publicly trying to distance itself from the NRA, FedEx has made a secret agreement with the association and other major players in the firearms industry.

“FedEx has never provided any donation or sponsorship to the NRA which is one of hundreds of alliance and association participants that serve more than one million customers,” the statement said.

In an expanded statement posted Tuesday, FedEx even attempted to link the NRA to its rival UPS, noting that the gun group used UPS for shipping merchandise from its online store.

But FedEx’s decision to stand by the NRA probably has less to do with shipping NRA polo shirts than a much more profitable business: shipping guns.

In a stark contrast with FedEx’s recent attempts to distance itself from the gun lobby, the internal company document obtained by ThinkProgress outlines in great detail precisely how FedEx has secretly agreed to bend its own rules on gun shipments for powerful forces in the gun industry, including all major gun manufacturers and the NRA itself.

The document, labeled “Confidential information. Internal use only,” was provided to ThinkProgress by a FedEx employee, who asked to remain anonymous due to concern that disclosing the document would cause the source to be terminated. …