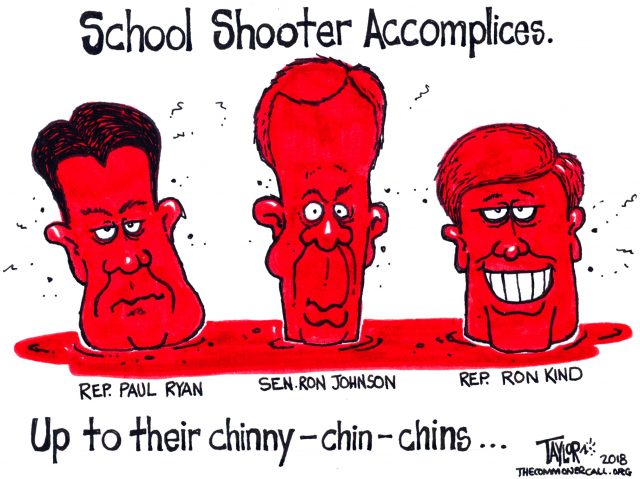 School and other mass shooters do not act alone. They are assisted by politicians on the take to the National Rifle Association. Through their indifference and coldly calculating, never satiated hunger for campaign cash and other benefits, these pols ignore the wishes of the majority of Americans to bring some legislative sanity to our gun cult. When the shooters begin their rampages they have been legislatively protected, coddled and assisted by those who are supposed to represent us.

The National Rifle Association loves to splurge their cash — including donations from Russia — on Republican candidates. In 2016 98% of NRA donations went to republicans. Check out the price tag on republican senators here.

In 2016 Rep. Paul Ryan was the third leading NRA bagman, raking in $171,977 and earning a solid NRA “A” rating from the leading enabler of mass shootings in America.

And who was the fourth leading recipient of NRA largess in 2016? Why our very own Sen. Ron ‘RoJo’ Johnson who bagged $165,498. (I’m guessing RoJo was gnashing his teeth that he didn’t get that final $2 to round up his take.) He too — of course — earned a resounding “A” rating from the NRA.

While Republicans carry away the majority of NRA/Russian cash, there are a handful of Democrats who manage to suck up some of that loot. In 2013 Paul Ryan ranked at the top of the Wisconsin delegation with $7,000 in donations, but La Crosse Democrat Rep. Ron Kind wasn’t far behind with $6,950. Kind is the only Wisconsin democrat in congress to hold a solid “A” rating from the NRA. At the same time Kind has earned the title of gun lobby “Lap Dog” from the Brady Campaign. (BTW, as of October 2017, Ron Kind had $2.8 million in his campaign lockbox. Only 23% of that came from individual voters.)

School shooters across the country thank the congressman and his republican pals for their tireless legislative efforts on behalf of affordable and always convenient mass murder.

So the next time you hear any one of these mopes mouthing off about “thoughts and prayers” for the latest gun massacre victims keep these facts in mind and know one thing:

“They don’t give a damn about the safety of your child.”

I wish I could say I came up with this idea, but I didn’t. It is something floating around the internet. Given pols like Ryan, Johnson and Kind don’t give the proverbial rat’s behind for what the majority of Americans want with gun reform, maybe they will get the message — written on a check (otherwise known as a congressional love letter)… 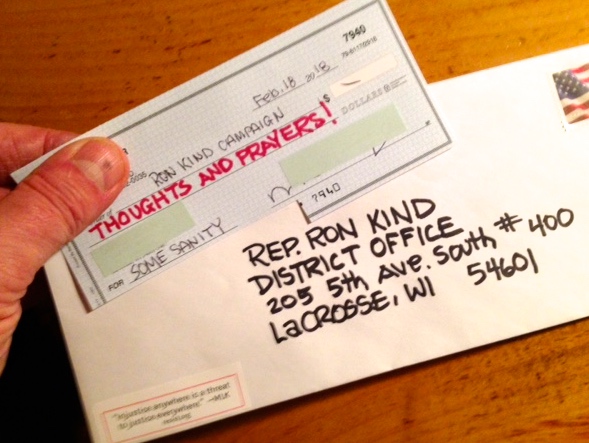 (Commoner Call cartoon by Mark L. Taylor, 2018. Open source and free to use with a link to www.thecommonercall.org )

Spread The Word — Pass This Post Along To Your Contacts.