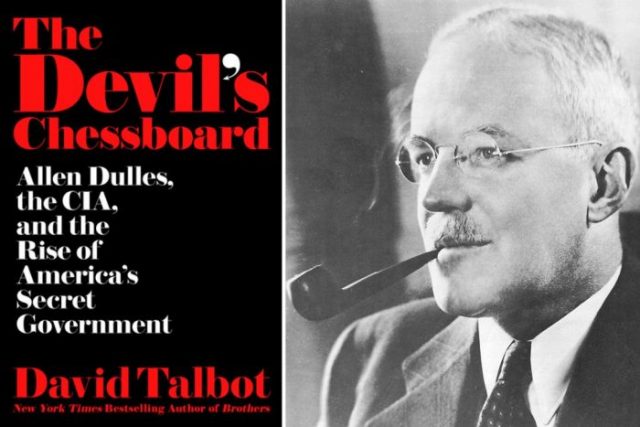 It is the nepotism and incestuous American secret corporate state that has led the nation into a parade of bloody and completely failed wars, coups and international murder and torture. From Central America to Vietnam, to Africa and the Middle East and Afghanistan the trail of bloody American failure and betrayal is beyond tragedy and has led to its logical conclusion: the cynical disgrace of the Trump White House.

If you have any childish illusions that the United States is any kind of democracy, Talbot’s “Chessboard” will challenge that assumption with the kind of brutal truth a mature nation must know and grapple with. Can the United States deal with the truth? So far, there is scant evidence to be found.

Reaching back to World War II Talbot explores the business dealings and shadowy personal friendships that Allen Dulles and his circle of wealthy Wall Street bankers and business figures maintained with Nazi figures. Dulles was instrumental in developing the rat lines that spirited Nazi war criminals out of Germany at the end of the war. Some of the most notorious war criminals were protected and used by the United States, including Hitler’s top intelligence officer on the eastern front, who Dulles later got installed as the top intelligence official in Western Germany. Talbot argues that the United States did not so much crush the Nazi regime as “re-purpose” it to the selfish needs and interests of the Cold War and the Wall Street power brokers.

The CIA was active against political reformers and human rights activists when many were kidnapped and transportation to brutal regimes for torture and murder. Of course the same kind of rendition program has not disappeared, as we witnessed with the Iraq War.

Dulles, who conspired with Nazis and far right wing forces, had been fired by President John F. Kennedy because of the Bay of Pigs fiasco. Despite this clear conflict, Dulles was appointed to the Warren Commission to investigate the assassination. Dulles played a major role in the direction of that deeply flawed and compromised investigation of the assassination.

Much of the worldwide pattern of blowback against systemic American corporate violence stems from the actions and patterns put in place by Dulles. The costly, failed war on terror is just the latest iteration of the dark and violent world of Dulles.

“The Devil’s Chessboard” is not ancient history: this story is playing out daily in this nation and around the world. It is continuing to play out as American service members are dispatched to pointless corporate wars of empire and repression and our civil liberties at home are gutted in the growing surveillance state.

Central to the secret activities of Dulles and the CIA was the corporate media not just running cover but frequently taking an active role. Not surprisingly, the mainstream media did it’s best to ignore and sideline Talbot’s book. Fortunately, those efforts were not successful and the book was a best seller.

If you want to understand what is happening now you have to understand our history and knowing the story of Allen Dulles is a big step in that direction.