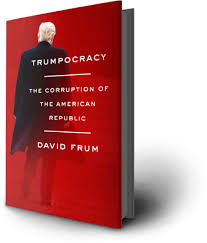 The new book “Trumpocracy” catalogs the damage that top never-Trumper David Frum says the president is doing to American institutions and the presidency.

That damage will last for a long time after Donald Trump, Frum, a writer for The Atlantic and a former speechwriter for George W. Bush, said in an appearance Tuesday on the NPR show On Point.

“It will be the work of a generation to get them to back to normal,” Frum told guest host John Harwood of CNBC. “Because one of the things Donald Trump has done is, he’s discovered a lot of the things were never written down. They’re not laws, they’re just habits. Those habits are broken and once broken they’re hard to put together.”

You can read an excerpt of Frum’s new book here.

Here are a few other highlights from our conversation:

On those broken habits:

On arguments from contemporaries like David Brooks that Trump critics are overstating the case:

“Obviously it’s always possible to overstate anything. But the risks of understatement, it seems to me, are even greater. Donald Trump is not a normal president.”

“That is the story — why did other people go along with this? The Constitution, the whole American political system exists to screen people like Donald Trump out of power.”

On a modern “citizenship test”:

“One of the criticisms you often hear of [Republican Arizona Sen.] Jeff Flake from people on the left is, ‘Well, he criticizes Donald Trump and yet he votes to confirm Donald Trump’s judges. He voted in favor of the tax cuts.’

And I’d ask you to imagine that this trend toward illiberalism in the United States had arisen on the left not on the right. And that could have happened — the United States is now confronting some Jeremy Corbyn-like president, somebody with ties to Hamas and Hezbollah, somebody who apologized for terrorist groups, somebody who is surrounded by people who were literally Stalinists and who had no sympathy for democratic decision-making.

And against that president a number of brave and conscientious and principled liberals said, ‘I’m not with him. I’m going to oppose when this illiberal leftist does illiberal things. I will speak up against them.’

If people on the right said to you, ‘Wait a moment. You haven’t signed up for school choice. You’re not in favor of cutting the capital gains tax. You’re not opposing President Corbyn.’

I didn’t say I’m surrendering my politics when I defended the Constitution. What Trump calls on us to do — [this is] the citizenship test he’s posing to us. We need to keep alive the possibility of democratic difference against a president who doesn’t accept it.”

On what George Bush would have done if he’d been promised dirt on an opponent, like the Trump campaign was:

“What I know about George W. Bush is, had that information come from the Russians or the Chinese or the Iranians, they’d have been on the phone to the FBI. That’s just the rule of the game because you should love your country more than you hate your political opponent and that rule the game has been broken.”