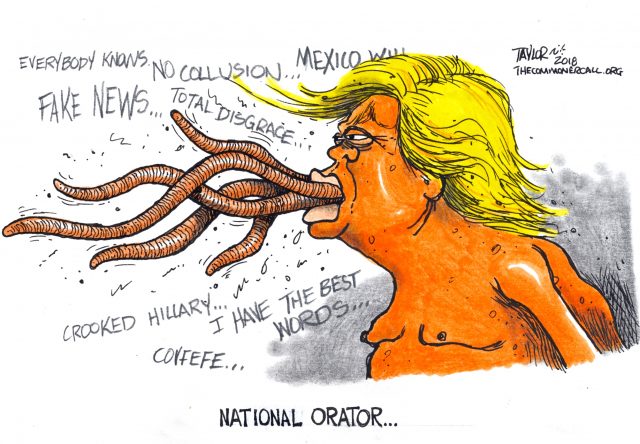 President Donald Trump is colonizing our brains with his drumbeat of repetitive words and phrases, an American linguist warns.

According to George Lakoff, an emeritus professor of cognitive science and linguistics at the University of California at Berkeley, constant repetitions actually create physical changes in our brains by forging stronger connections in our neural pathways, “Language activates an idea and a circuitry in your brain. Every time a circuit is activated, its synapses get stronger,” Lakoff told Deutsche-Welle in an interview published Sunday.

In other words, the more you hear things — and say things — the stronger the circuitry becomes.

Constant repetitions are worming their way into the circuitry of our brains.

Plus, the absorbed words can begin to reframe our perception of the world. Lakoff pointed to President George W. Bush’s constant use of “tax relief,” which essentially defines taxes as an affliction. Soon Democrats and the media were also using the phrase, and in essence, changed their perception of reality.

Even if you disagree with an idea and contradict it, the words still worm their way into your head.

“Every time you deny something overtly using the language of the person you are trying to contradict, you are actually helping that person,” Lakoff said.

Besides repetitions of his pet phrases, Trump also uses other language-distorting strategies in his tweets. He frames situations in his own terms. He diverts attention from issues he wants to be ignored. He attacks the messenger or blames someone. Finally, he launches a trial balloon by saying something outrageous.

“You are not puppets,” Lakoff said. “Cut the strings.” Don’t use the same language Trump uses.

“Use the language that conveys the truth,” Lakoff added.

(Commoner Call cartoon by Mark L. taylor, 2018. Open source and free to use with link to www.thecommonercall.org )