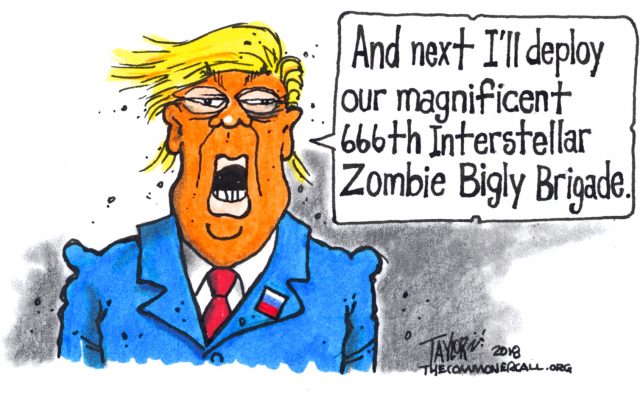 President Trump caused a stir with his announcement that the United States had delivered F-52 fighter jets to Norway.

Was it a secret advanced jet capable of beating its Russian counterparts? A ruse to fool intelligence analysts?

Neither, it turns out. The “F-52” is a fictional jet only available to fly if you’re a gamer at the controls of “Call of Duty: Advanced Warfare.”

Trump lauded the sale of the fictional planes alongside Norwegian Prime Minister Erna Solberg at the White House on Wednesday, remarking on the very real and growing defense relationship with America’s Northern Europe ally.

White House press secretary Sarah Huckabee Sanders did not return a request to comment on the issue and did not respond to a question asking whether Trump was a Call of Duty fan.

“In November we started delivering the first F-52s and F-35 fighter jets,” Trump said. “We have a total of 52 and they’ve delivered a number of them already a little ahead of schedule.”

Trump was reading from a statement, and it appears he combined the figure of 52 planes with the “F” designation assigned to fighter jets in the U.S. inventory, such as the F-35 Lightning II.

Lockheed Martin, the defense company that produces the actual aircraft, said in a statement that the Norwegian government has so far authorized funding for 40 F-35s, and has taken delivery of 10 to date. Three arrived at Ørland Air Base in November, spokeswoman Carolyn Nelson said.

The company did not say if it had an F-52 program in development. …

Read the Rest and 5+-Minute Video

It did not go well.

On Thursday, Funny Or Die released a parody of that interview featuring actor Pauly Shore, and honestly it’s a tough call on which is more entertaining. …