The crackdown on leaks only applied to low-level dissenters; top officials caught up in leak investigations, like former CIA Director David Petraeus, were still treated with kid gloves.

We spend the hour with former New York Times reporter James Risen, who left the paper in August to join The Intercept as senior national security correspondent. This week, he published a 15,000-word story headlined “The Biggest Secret: My Life as a New York Times Reporter in the Shadow of the War on Terror.” The explosive piece describes his struggles to publish major national security stories in the post-9/11 period and how both the government and his own editors at The New York Times suppressed his reporting, including reports on the Bush administration’s warrantless wiretapping program, for which he would later win the Pulitzer Prize.

Risen describes meetings between key Times editors and top officials at the CIA and the White House. His refusal to name a source would take him to the Supreme Court, and he almost wound up in jail, until the Obama administration blinked.

Link to Story and 48-Hour Video

Behind his back, the paper met secretly with CIA.

We continue our interview with former New York Times reporter James Risen, who left the paper in August to join The Intercept as senior national security correspondent. This week, he published a 15,000-word story headlined The Biggest Secret: My Life as a New York Times Reporter in the Shadow of the War on Terror.

Link to Story and 30-Minute Video

The Biggest Secret: Reporter Hounded By The Government & His Editors At The NY Times

(Editor’s Note: While the New York Times has done a lot of courageous, cutting edge reporting on the ever-spinning Trump crisis, never forget that when in comes to recent American wars of choice the paper has too often been a cheerleader. The paper’s reporter Judith Miller – and her enabling editors – was no more than a shill for the Cheney/Bush war of aggression against Iraq. – Mark L. Taylor)

I was sitting in the nearly empty restaurant of the Westin Hotel in Alexandria, Virginia, getting ready for a showdown with the federal government that I had been trying to avoid for more than seven years. The Obama administration was demanding that I reveal the confidential sources I had relied on for a chapter about a botched CIA operation in my 2006 book, “State of War.” I had also written about the CIA operation for the New York Times, but the paper’s editors had suppressed the story at the government’s request. It wasn’t the only time they had done so. … 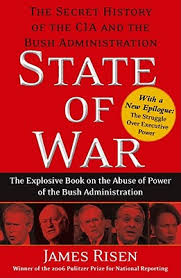 All The News Unfit To Print: James Risen On His Battle With Bush, Obama & The New York Times.