Republicans in Wisconsin are wasting no time attacking workers in the New Year. A bill that preempts a local municipality from enacting a local living wage, fair scheduling standard, and a host of other measures that would improve the lives of working people is up for a public hearing at the state Capitol on Wednesday, January, 10.

Senate Bill 634 will preempt many ways in which local governments in Wisconsin could enhance employment standards in their own communities, and would preempt new ideas to enhance workplace standards, even those that have been tried and tested across the Country, from going forward in our own communities. The bill is co-authored by Sen. Kapenga (R- Delafield) & Rep. Hutton (R-Brookfield). The duo has made it their New Years resolution to continue to chip away at worker rights in order to further rig the rules of our economy to favor their campaign donors.

Attend the hearing on Wednesday to speak out for the ability of local communities to make decisions to raise wages, enact predictable scheduling or create agencies to handle wage claims, or complaints about wage theft. We know Gov. Walker will not help workers struggling to make ends meet. Now, the GOP is shamefully taking away the ability of our local governments to support working people to have better wages and better jobs.

Click here to send a message to your Senator today. Tell them to stand up for worker rights and vote NO on SB 634 and AB 748.

More about the bill:

This bill would make sweeping changes to how working people can make change at the local level to increase consistency and quality in products and services and fairness and justice at work.

3. This bill would prohibit local governments from enforcing license regulations that are more strict than the state standards for that license.

4.   This bill would prohibit local governments from enacting or enforcing employment discrimination standards.

5.   This bill would prohibit local governments from forcing contractors to agree to a mandatory labor peace agreement in order to receive a license or permit.

6.   The bill would create a statewide standard for employee scheduling of hours and overtime regulations, and would prohibit local governments from passing fair scheduling ordinances.

7. This bill would prohibit local governments from setting a level of employment benefits for employers, for example mandating certain time off or retirement benefits.

8.   This bill would prohibit local governments from passing an ordinance to prohibit employers from asking about salary history.

9.   This bill would prohibit local governments from creating agencies to handle wage claims, or complaints about wage theft.

New York City, Seattle and Oregon have enacted fair scheduling ordinances which create predictable, stable schedules for working families. This family-friendly policy lets workers plan their workweek and child care responsibilities ahead of time. Too many jobs are moving towards on-demand or gig-style scheduling which allows employers to tell workers to stay home or come into work at the last minute without predictability.

Senate Bill 634 / Assembly Bill 748 would, among other anti-worker proposals, bar any city or local government from enacting family-friendly policies that support working Moms and Dads and lift up entire communities.

This bill attacks workers, our rights, and our democratic processes and has no place in Wisconsin. Under our Wisconsin State Constitution and various state statutes, local governments largely may determine their own affairs. Communities around our State have come together to address safety standards, wage protection, and rights at work by passing local ordinances to improve our workplace standards. This bill would preempt those local ordinances and would prevent creative initiatives that come from local leaders and communities from being considered.

Attend the hearing at the Capitol next Wednesday and send an email to your representatives today!

We look forward to working together to continue the fight for good jobs, fair wages for all workers, strong union freedoms, fair contracts that grow our economy and a more just economy for all in 2018. 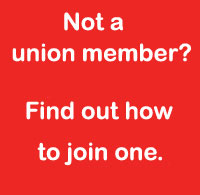 If You Want To Protect Your Rights, Join A Union!

– Robert Reich, How Clinton and Obama Failed to Defend the Middle Class.