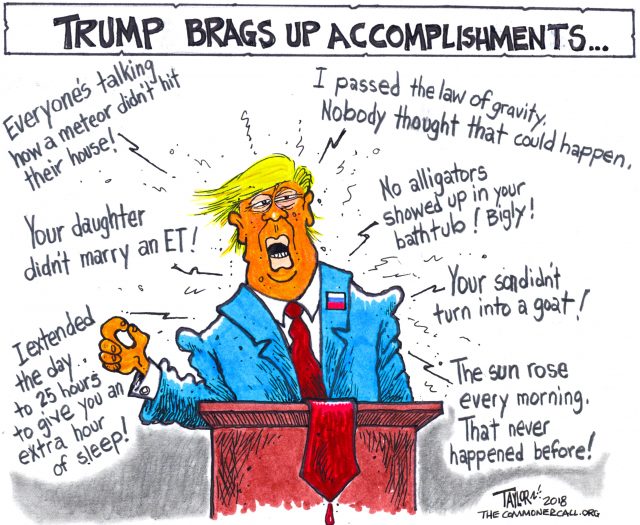 Speaking from the egocentric worm hole Donald Trump calls his world, he declared Tuesday that 2017 was the safest year for air travel on record because of — surprise — him. In response to news that there were no commercial airline crashes anywhere in the world last year, Trump claimed responsibility, explaining:

“Since taking office I have been very strict on Commercial Aviation. Good news – it was just reported that there were Zero deaths in 2017, the best and safest year on record!”

Of course, Trump’s egocentric declaration came with no supporting facts or examples of just how he has been “very strict on Commercial Aviation.”

And then there was this: The Hill reporter Reid Wilson notes, there have been no [Amrican] commercial airline crashes in the United States since 2009. So, if the president is responsible for an accident-free 2017, could it be that Trump has simply been following in the foot steps of President Obama’s 7-year airline safety record?

The Very Best Liar: Nearly A Year In, Trump Averaging 5.6 Lies Per Day

“All governments lie,” as the saying goes, but Donald Trump appears to have taken presidential lying to new heights during just his first year in the White House.

According to an ongoing analysis by the Washington Post that has tracked Trump’s formal speeches, Twitter tirades, and impromptu remarks to the press, the president made 1,950 false or misleading statements during his first 347 days in office. On average, the president says something that is untrue 5.6 times per day.

With just over two weeks left before he reaches the one-year mark, Trump is on track to surpass 2,000 lies, misleading the public at a far higher rate than his recent predecessors.

As the Post‘s database demonstrates, Trump’s lies come in a variety of forms and pervade nearly every topic he discusses, from jobs and the stock market to immigration and foreign policy.

The database also makes clear that the president isn’t sufficiently inventive to come up with new lies on a day-to-day basis. Rather, he frequently rehashes old ones—Trump has repeated the claim that Obamacare is “essentially” dead over 50 times, for instance. Trump has also repeatedly insisted—contradicting all available evidence—that the tax bill he signed into law last month will cost him “a fortune.” 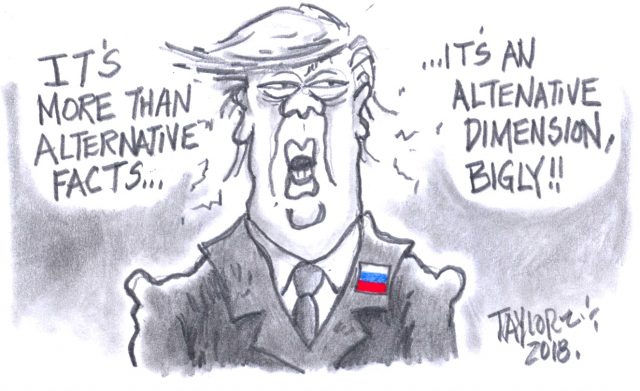 The problem, as many analysts have noted, is that Trump’s prodigious lying has had little to no effect on his core base of support.

“Trump repeated the falsehood about having the biggest tax cut 53 times, even though Treasury Department data shows it would rank eighth,” the Post adds. “And 58 times Trump has claimed that the United States pays the highest corporate taxes (25 times) or that it is one of the highest-taxed nations (33 times). The latter is false; the former is misleading, as the effective U.S. corporate tax rate (what companies end up paying after deductions and benefits) ends up being lower than the statutory tax rate.”

The lies have come at such a rapid pace, the Post notes, that attempting to track them all has become a significant strain on the paper’s resources. “We will soon face a decision about whether to maintain [the database] beyond one year,” the analysis concludes.

The problem, as many analysts have noted, is that Trump’s prodigious lying has had little to no effect on his core base of support.

As The Atlantic‘s David Graham noted last year, hardcore supporters of the president are often unfazed by his false statements. Though Trump backers are frequently willing to admit when the president says something that is untrue, their support for him rarely wavers because of his misleading claims.

“They know he’s wrong, and they don’t care (that much),” Graham observed.

In a column for the Philadelphia Daily News on Monday, Will Bunch warned that Trump’s base of support combined with his ability to manipulate the media raises the “scary” possibility—despite polls showing he is the least popular first-year president in American history—that he could still win reelection in 2020.

“It’s scary to have a president who lies so brazenly and who seems out-of-touch with fundamental reality,” Bunch concluded, “but it’s even scarier to think he could still be doing this from a presidential perch seven years from now.”

(This work is licensed under a Creative Commons Attribution-Share Alike 3.0 License.)
Link to Story
(Commoner Call cartoons by Mark L. Taylor, 2018. Open source and free to use with link to www.thecommonercall.org )