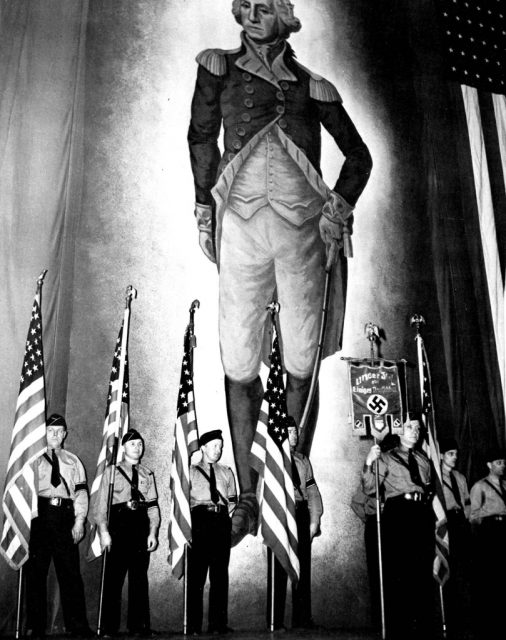 Throughout the 1930’s and right up to the outbreak of war in Europe there was a vigorous American Nazi Bund movement that was especially active in upper Midwest states, like Wisconsin. In February of 1939 20,000 American Nazis gathered in New York City’s Madison Square garden for a rally that no doubt warmed the olive pit-sized heart of Adolf Hitler. The event was staged with all the theatrical pomp and dramatic ceremony of  a Munich rally.

Take a few minutes to watch the clip below from the evening’s dark activities and compare it to a Donald Trump rally with all it’s flags and fake patriotism and blustering talk about taking back the country.

The truth is, recent polling found 9% of Americans are committed fascists in that they agree with Nazi and white supremacist beliefs. That works out to 22 million. But I would say that is a naive and dangerous under count, given Trump’s rating has consistently stayed in the mid-to-just-above 30’s.

You can say many things about Donald Trump but one thing you can’t say is that the guy is subtle. He’s as subtle as a dropped bowling ball. His primitive nativist racism is on full 24/7 display. He begins each morning tweeting his nasty hate and cuddles with the likes of Vladimir Putin and paling up to Philippine murderer Rodrigo Duterte (“great realtionship”), while betraying our Kurdish allies for Turkey’s Recep Tayyip Erdoğan or gushing about what a great leader Egypt’s bloody despot Abdel Fattah el-Sisi is.

Given Trump’s skill at manipulating the news and his full-time PR operation over at Fox News, and his refusal to condemn white supremacists, his fans can’t credibly claim they don’t know who and what he stands for and what he stands for is fascism. Though they may not be able to define fascism, with every fist bump and muttered “right on” in response Trump’s civil obscenity they have signed on to fascism.

Every Republican who refuses to speak out against Trump’s racism is, through their silence, a fascist.

Obviously, not every Trump fan is a full-fledged fascist by sympathy and instinct. Many just like the MAGA vibe and don’t cast a brain wave beyond the red ball cap ($19.99 to Trump). But seriously, the number of American fascists is way beyond 9%, or 22 million. To deny that is to deny reality and leave us all dangerously at risk.

To get a flavor of American Nazism in the past and see how it echoes through loudly today with Trump in every news cycle, check out the video clip below from that 1939 rally.

Anxious to find precedents for the frightening and ultimately deadly white nationalist, “Unite the Right” rally in Charlottesville, some media outlets have likened the images of the recent mayhem in Virginia to the chilling ones of the German-American Bundrally that filled Madison Square Garden on February 20, 1939, with 22,000 hate-spewing American Nazis.

That rally, the largest such conclave in U.S. history, shocked Americans at the time. They had seen the press accounts and newsreel footage of the Nazis’ massive Nuremburg rallies; they had read about Kristallnacht, the murderous, two-day anti-Semitic pogrom of November 1938, which the Bund—the fast-growing, American version of the German Nazi party, which trumpeted the Nazi philosophy, but with a stars-and-stripes twist—had unabashedly endorsed.

But that was in Europe. This was America. New York City. For Americans wondering whether it could happen here, the Bund rally provided the awful answer. … Read the Rest

‘He’s enabling this stuff’: Ex-Skinhead Explains How Trump Is Popularizing White Supremacy In The US

Brad Galloway broke away from the skinhead movement in Canada after 13-years and told the Toronto Star, “the guy down south there is enabling this stuff, I believe, by allowing it to be normalized.”

“The movement is growing because of the normalized message coming from the United States,” he says. “It’s so often that people are latching on to this.”

Galloway now works with the organization Life After Hate to prevent others from following his path into organized bigotry. Galloway is featured in a new Canadian Broadcasting Corporation documentary Skinhead, which premiers on Sunday.

Galloway’s Volksfront gang in Canada originated in Portland, Oregon and he sees a similar trend now developing as bigotry from America again crosses the border. The Canadian documentary Skinhead even features a Donald Trump campaign rally. …