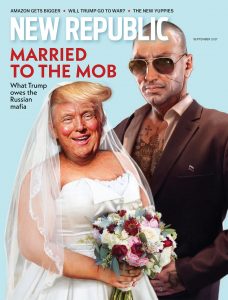 On a dark night at the tail end of last winter, just a month after the inauguration of the new American president, an evening when only a sickle moon hung in the Levantine sky, two Israeli Sikorsky CH-53 helicopters flew low across Jordan and then, staying under the radar, veered north toward the twisting ribbon of shadows that was the Euphrates River. On board, waiting with a professional stillness as they headed into the hostile heart of Syria, were Sayeret Matkal commandos, the Jewish state’s elite counterterrorism force, along with members of the technological unit of the Mossad, its foreign-espionage agency. Their target: an ISIS cell that was racing to get a deadly new weapon thought to have been devised by Ibrahim al-Asiri, the Saudi national who was al-Qaeda’s master bombmaker in Yemen.

The president betrayed his intelligence community by leaking the content of a classified, and highly sensitive, Israeli intelligence operation to two high-ranking Russian envoys. This is what he told them—and the ramifications.

It was a covert mission whose details were reconstructed for Vanity Fair by two experts on Israeli intelligence operations. It would lead to the unnerving discovery that ISIS terrorists were working on transforming laptop computers into bombs that could pass undetected through airport security. U.S. Homeland Security officials—quickly followed by British authorities—banned passengers traveling from an accusatory list of Muslim-majority countries from carrying laptops and other portable electronic devices larger than a cell phone on arriving planes. It would not be until four tense months later, as foreign airports began to comply with new, stringent American security directives, that the ban would be lifted on an airport-by-airport basis.

In the secretive corridors of the American espionage community, the Israeli mission was praised by knowledgeable officials as a casebook example of a valued ally’s hard-won field intelligence being put to good, arguably even lifesaving, use.

Yet this triumph would be overshadowed by an astonishing conversation in the Oval Office in May, when an intemperate President Trump revealed details about the classified mission to Russia’s foreign minister, Sergey V. Lavrov, and Sergey I. Kislyak, then Russia’s ambassador to the U.S. Along with the tempest of far-reaching geopolitical consequences that raged as a result of the president’s disclosure, fresh blood was spilled in his long-running combative relationship with the nation’s clandestine services. Israel—as well as America’s other allies—would rethink its willingness to share raw intelligence, and pretty much the entire Free World was left shaking its collective head in bewilderment as it wondered, not for the first time, what was going on with Trump and Russia. (In fact, Trump’s disturbing choice to hand over highly sensitive intelligence to the Russians is now a focus of special counsel Robert Mueller’s investigation into Trump’s relationship with Russia, both before and after the election.) In the hand-wringing aftermath, the entire event became, as is so often the case with spy stories, a tale about trust and betrayal.

And yet, the Israelis cannot say they weren’t warned. …