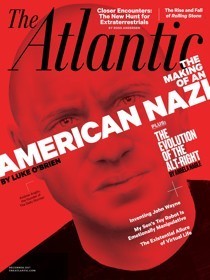 By Luke O’Brien
The Atlantic (December 2017)

On December 16, 2016, Tanya Gersh answered her phone and heard gunshots. Startled, she hung up. Gersh, a real-estate agent who lives in Whitefish, Montana, assumed it was a prank call. But the phone rang again. More gunshots. Again, she hung up. Another call. This time, she heard a man’s voice: “This is how we can keep the Holocaust alive,” he said. “We can bury you without touching you.”

When Gersh put down the phone, her hands were shaking. She was one of only about 100 Jews in Whitefish and the surrounding Flathead Valley, and she knew there were white nationalists and “sovereign citizens” in the area. But Gersh had lived in Whitefish for more than 20 years, since just after college, and had always considered the scenic ski town an idyllic place. She didn’t even have a key to her house—she’d never felt the need to lock her door. Now that sense of security was about to be shattered.

The calls marked the start of a months-long campaign of harassment orchestrated by Andrew Anglin, the publisher of the world’s biggest neo-Nazi website, The Daily Stormer. He claimed that Gersh was trying to “extort” a property sale from Sherry Spencer, whose son, Richard Spencer, was another prominent white nationalist and the face of the so-called alt-right movement. 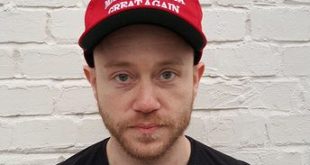 How did Andrew Anglin go from being an antiracist vegan to the alt-right’s most vicious troll and propagandist—and how might he be stopped?

The Spencers had long-standing ties to Whitefish, and Richard had been based there for years. But he gained international notoriety just after the 2016 election for giving a speech in Washington, D.C., in which he declared “Hail Trump!,” prompting Nazi salutes from his audience. In response, some Whitefish residents considered protesting in front of a commercial building Sherry owned in town. According to Gersh, Sherry sought her advice, and Gersh suggested that she sell the property, make a donation to charity, and denounce her son’s white-nationalist views. But Sherry claimed that Gersh had issued “terrible threats,” and she wrote a post on Medium on December 15 accusing her of an attempted shakedown. (Sherry Spencer did not respond to a request for comment.)

At the time, Richard Spencer and Andrew Anglin barely knew each other. Spencer, who fancies himself white nationalism’s leading intellectual, cloaks his racism in highbrow arguments. Anglin prefers the gutter, reveling in the vile language common on the worst internet message boards. But Spencer and Anglin had appeared together on a podcast the day before Sherry’s Medium post was published and expressed their mutual admiration. Anglin declared it a “historic” occasion, a step toward greater unity on the extreme right.

It was in this spirit that Anglin “doxed” Gersh and her husband, Judah, as well as other Jews in Whitefish, by publishing their contact information and other personal details on his website. He plastered their photographs with yellow stars emblazoned with jude and posted a picture of the Gershes’ 12-year-old son superimposed on the gates at Auschwitz. He commanded his readers—his “Stormer Troll Army”—to “hit ’em up.” …

Read the Rest and 68-Minute Audio

Who Is Andrew Anglin?

“Our Glorious Leader has ascended to God Emperor. Make no mistake about it: we did this. If it were not for us, it wouldn’t have been possible.” – Andrew Anglin, “We Won”

Andrew Anglin is the founder of the neo-Nazi Daily Stormer website, which aptly takes its name from the gutter Nazi propaganda sheet known as Der Stürmer. True to that vintage, Anglin is infamous for the crudity of his language and his thinking, a contrast to his sophistication as a prolific Internet troll and serial harasser.

Andrew Anglin is the founder and editor of the neo-Nazi Daily Stormer website. Styled after popular image-heavy Internet forums like 4chan and 8chan, the Daily Stormer is dedicated to spreading anti-Semitism, neo-Nazism, and white nationalism, primarily through guttural hyperbole and epithet-laden stories about topics like alleged Jewish world control and black-on-white crime. As of April 2017, the site ranked 13,137th globally and 5,597th within the United States, according to Alexa.

In his own words

“Fear. Now is the time for it … We want these people to feel unwanted. We want them to feel that everything around them is against them. And we want them to be afraid.”
—“Female Hajis Fear to Wear the Headtowel in Public After Trump Win—You Should Yell at Them”

“The fact is, when you give women rights, they destroy absolutely everything around them, no matter what other variable is involved … Even if you become the ultimate alpha male, some stupid bitch will still ruin your life.”
—“Brad Pitt Losing Weight and His Mind After Whore Wife Ruins His Life”

“Jews, Blacks and lesbians will be leaving America if Trump gets elected—and he’s happy about it. This alone is enough reason to put your entire heart and soul into supporting this man.”
—“Get Em Outta Here: Glorious Leader Calls for Kike Lena Dunham to Leave America,” April 26, 2016

“The day is coming when we’re going to tear down the hoax [Holocaust] memorial in Berlin and replace it with a statue of Hitler 1,000 feet tall.”
—“SS Auschwitz Guard Dies Days Before Scheduled Lynching by Kikes,” April 8, 2016

“I ask myself this, in all things: WWHD? (What Would Hitler Do?). To be slightly more honest/specific, I ask myself what Hitler would do if he’d been born in 1984 in America and was dealing with this situation we are currently dealing with and also really liked 4chan and Anime. Hitler was, ultimately, the symbolic (and in some ways actual real life) culmination of traditional Europeanism.
—“Andrew Anglin Exposed,” March 14, 2016

“My problem with blacks is that I have come to understand that their biological nature is incompatible with White society, and that we will never have peace as long as they are among us, given that irrational outbursts of brutal violence are a part of their nature.”
—“Blacks Loved Slavery and Regretted its End,” Feb. 20, 2014

Anglin spent his high school years dabbling in liberal politics, according to an interview he gave to Vocativ. He became a fascist after reading Noam Chomsky, exploring “all that Communist Jewish stuff,” and studying religion, including Islam and Buddhism, eventually arriving at Adolf Hitler and Benito Mussolini. In an autobiographical article entitled “Andrew Anglin Exposed,” Anglin expounded on his life’s path: “I started out with normal Alex Jones type conspiracy material, and then moved on to weirder conspiracy material, and then eventually decided Ted Kaczynski was right with regards to a coming apocalypse due to the rapidity of technological development.” (Jones is probably America’s most prolific conspiracy theorist. Kaczynski was the “Unabomber” who is now in prison.)

An investigative piece published in February 2017 by Columbus Alive, a weekly newspaper from Anglin’s hometown, revealed a less polished ideological journey. Former classmates recalled an outspoken liberal and vegan who sported dreadlocks and JNCO pants. Anglin, who was once known to speak out against racism and homophobia, was also prone to violent tantrums including one alleged incident  during a party in high school where he repeatedly bashed his head on a sidewalk outside. Former classmates also recalled Anglin’s bedroom walls being dented from other tantrums involving head slamming.

Learn More About The Work Of The Southern Poverty Law Center, HERE.