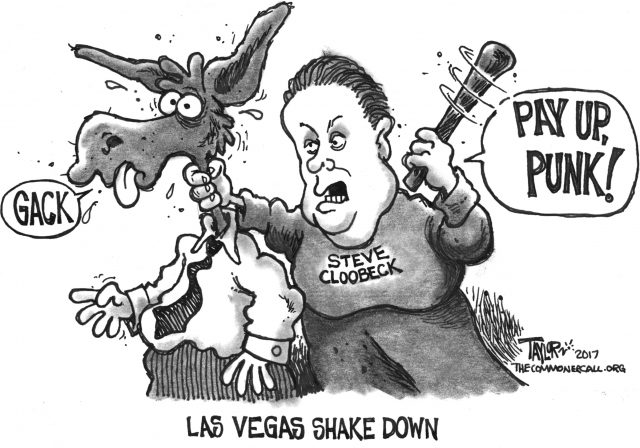 In case you missed it, Las Vegas multi-millionaire Democratic Party not-so-silent-owner Steve Cloobeck recently had a bit of a meltdown on MSNBC railing against the dangerous notion that the Democratic Party should represent the interests of all Americans and not just the incestuous Wall Street cheats, corporate con artists and hedge fund grifters, scammers and sociopaths he usually runs with.

I know, I know, not a radical idea that a major political party should actually stand for the interests of the families, communities and small business people they say they represent. For big money bullies like Mr. Cloobeck it is not enough to have the Republicans pimping his special interests and parochial world view, he needs both parties working for him.

“I can tell you if we go far left, I’m out,” Stevie yelled to MSNBC’s Stephanie Ruhle.

“I’ve talked to Schumer, I’ve talked to Wyden, I’ve talked to Pelosi and I’ve said if you use the term billionaire again, I’m done.” Stevie sputtered. “We should be a party of business… it is very, very disturbing when I hear the ‘billionaire’ or ‘millionaire’ word. And I told them to stop it, knock it off. I’ve made it very clear, I’ll cut your money off. Others will do the same.”

Stevie got really wound up, launching into a spittle-spouting Daddy Warbucks tirade of entitlement: “I can tell you if we go far left, I’m out,” Cloobeck said. “I’m out. We need middle ground.” “It drives me nuts. So much so it would make me quit the party. …And I’ve made it very clear; I’ll cut your money off. And others will do the same. We’ve had enough. We need a new brand.”

You can check out Stevie’s tantrum: Rich Douchebag Won’t Fund Democrats If They Say ‘Billionaires’ Again.

Okay, okay, I know that is not very polite language, but really, if a rich douchebag is a douchebag, shouldn’t we, in interest of accuracy, call it what it is? Here at The Commoner Call we say, yes.

Over at The Young Turks (11/13), Cenk Uygur went into full-throttle populist rant, noting, “If you thought it was just the republican party you got another thought coming.”

I can agree with him on one thing

I will agree with Stevie, who has grabbed his multi-millions in the low-paying resort industry, on one thing: the Democratic Party damn well needs a “new brand.” The party needs to drop the Clintonian neoliberal, corporate-stroking abandonment of the American families, labor, the poor and and get back to the party’s progressive roots.

If, as the Democrats now do, you are hooked on Wall Street millions and your party heads, like both Clintons and Obama, scarf up millions stroking the stratospheric egos of Wall Street banksters with empty speeches you must moan with lust at the pillow talk of big money hustlers.

There is a reason the Democratic party’s current approval rating of 37% (down from 44% in March) is below the approval rating for demonstrably the least qualified, walking-dirty-diaper of a president in American history, Donald Trump, who is rating at 38%.

I have just one thing to say Stevie and his jillionaire pals: “Shut up.”

Shut up and go.

With the recent purging of Sanders reps in the DNC it is clear who the party honchos are listening to and, believe me, it ain’t people like you and me.

I recently sent a polite (honestly) note to Democratic Party of Wisconsin chair Martha Laning urging the DPW to kick  the opiate of corporate money and the kind of shady money laundering arraignment the party entered into with the Clinton campaign and instead forge a truly representative progressive platform then ask people to donate to support their best interests. I, for one, would be willing to commit to monthly donations to such a party. I received the kind of response I have come to expect from the DPW: crickets in the graveyard.

A junkie can never get clean living with his dealer.

In case you are interested, you can send an email to Stevie Cloobeck and take him up on his promise to leave the Democratic Party.

You can send a note to Stevie at: stephenj.cloobeck@diamondresorts.com

Here’s the email I sent Stevie “When I Say Jump, Ask How High On The Way Up” Cloobeck…

Just saw your interview warning the Dems to fall in line with Wall Street and your billionaire agenda.
Hey, man, “Bye-bye, Jerk!”
Even more tax cuts for millionaire/billionaire parasites like you at the expense of the working and middle class at the same time the “Paradise Papers” detail how arrogant freeloaders like you avoid paying taxes for the very public systems – roads, courts, cops, educational system – that makes it possible for people like you to grow wealthy while leaving us with the bill? No more. In fact, let’s get the tax on the wealthy back up to where it should be – 95%, like it was back in the 1950’s and the middle-class grew and the economy rocketed.
Stevie: “Screw you!”
Take your dirty unearned money, greed, arrogance and potty mouth and get the hell out of the Democratic Party. I am a democrat who has donated and volunteered on campaigns and believe me, I and the rank and file are sick and tired of rich pricks like you twisting and perverting the party to your selfish ends and we are beyond done with the DNC and the Democratic Party of Wisconsin leadership.
Get the hell out of the party, Stevie. Run, scoot and drag your dirty money bags behind you.

Take your filthy, unearned money and go. Pal up with your soul brother Donald Trump. Get out. Scurry through the sewers to Donald and Stevie Bannon, and his keepers the Mercers. Get out and skitter along through the gutters, far, far away from the Democratic Party, you twisted little traitor. 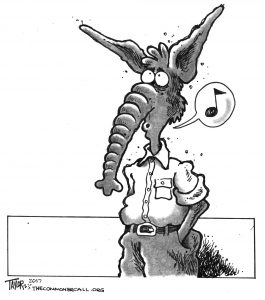 (Commoner Call column and cartoons by Mark L. Taylor, 2017. Open source and free to use with link to www.thecommonercall.org )
*****

The globe’s richest 1% own half the world’s wealth, according to a new report highlighting the growing gap between the super-rich and everyone else.

The world’s richest people have seen their share of the globe’s total wealth increase from 42.5% at the height of the 2008 financial crisis to 50.1% in 2017, or $140tn (£106tn), according to Credit Suisse’s global wealth report published on Tuesday.

While the global population of millionaires has grown considerably, the number of ultra-high net worth individuals – those with a net worth of $50m or more – has increased even faster.

“The share of the top 1% has been on an upward path ever since [the crisis], passing the 2000 level in 2013 and achieving new peaks every year thereafter,” the annual report said. The bank said “global wealth inequality has certainly been high and rising in the post-crisis period”.

The increase in wealth among the already very rich led to the creation of 2.3 million new dollar millionaires over the past year, taking the total to 36 million. “The number of millionaires, which fell in 2008, recovered fast after the financial crisis, and is now nearly three times the 2000 figure,” Credit Suisse said.

These millionaires – who account for 0.7% of the world’s adult population – control 46% of total global wealth that now stands at $280tn.

At the other end of the spectrum, the world’s 3.5 billion poorest adults each have assets of less than $10,000 (£7,600). Collectively these people, who account for 70% of the world’s working age population, account for just 2.7% of global wealth. …