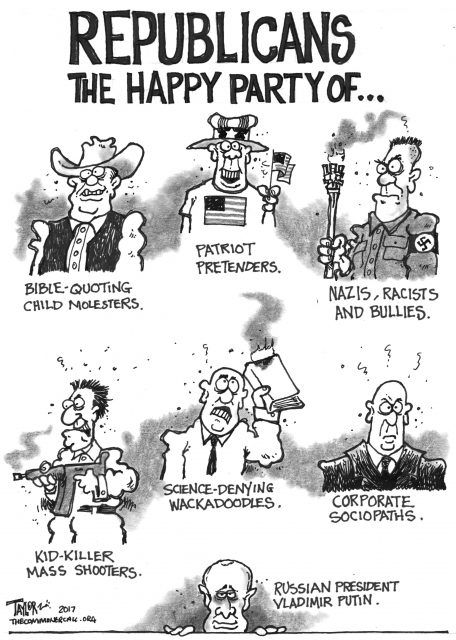 While GOP Leaders May Want Roy Moore To Go Away, Rank-And-File Republicans Aren’t So Sure

Republican supporters nationwide have yet to embrace calls by GOP leaders that party nominee Roy Moore end his Senate candidacy in Alabama, a HuffPost/YouGov pollshows, though support for him in the national survey is tepid, at best.

By a 12-percentage-point margin, 39 percent to 27 percent, registered Republicans and independents who lean toward the party say Moore should not drop out of the race because of sexual assault and misconduct allegations against him. The rest of those polled said they were unsure about what he should do.

Results on that question have varied across surveys since the allegations surfaced. A poll by Quinnipiac University of solely Republican voters showed a close split on the matter, with 38 percent saying Moore should keep running and 42 percent saying he should not. In a Morning Consult/Politico survey, again of only Republican voters, respondents said by a nearly a two-to-one margin he should drop out.

While the HuffPost/YouGov survey looked at a broader population by including GOP-leaning independents and American not registered to vote, that doesn’t seem to be a source of the discrepancy. Support for Moore continuing his candidacy was larger solely among Republican voters in the HuffPost/YouGov poll than among the larger sample ― 42 percent said he should stay in the race, while 23 percent said he should exit and 35 percent weren’t sure. …

Roy Moore & The Annals Of Scumbaggery

By Abby Zimet
Common Dreams (11/14/17)
Remarkably, the sordid spectacle of the Roy Moore saga gets ever sleazier. Added to his sexual pursuit, harassment  and assault of at least five teenage girls and his longstanding homophobia, Islamophobia, all-round creepiness and hate-mongering under the cherished guise of “Christianity” – wherein 9/11 was the result of turning away from God, just like Isaiah warned: “Because you have despised His word and trust in perverseness…therefore this iniquity will be to you as a breach ready to fall” – comes a flood of newly revealed atrocities. How low can we go? This low, it seems.
As Alabama’s highest state judge, Moore defended the rights of sexual offenders against their victims in an infamous dissenting opinion. As a 32-year-old district attorney in the 1980s, say a dozen sources who include politicians, police, lawyers and former employees, Moore was either officially or unofficially banned from a local mall, as well as the YMCA,for his well-known propensity for nighttime cruising for teenage girls. The ban was evidently unsurprising to many locals because, “It was common knowledge that Roy dated high-school girls.”
That was then; this is now. It’s still ugly. As Moore grows so toxic even the GOP has withdrawn their money and called for expelling him from the Senate if he wins, he and his defenders continue to go to surreal places in an apparent endless death spiral. Rush Limbaugh, the king of WTF rhetoric, has argued that Moore was actually a Democrat at the time of the alleged assaults so it was probably their fault, or Obama’s. As Sean Hannity offered him a chance to clear his shit-stained name, Moore disingenuously insisted his behavior was “altogether appropriate.” He went on, “I don’t remember ever dating any girl without the permission of her mother” – what is wrong with this picture?! – before gallantly citing his “special concern for the protection of young ladies.” Even Hannity was unconvinced.
His Tennesee-Williams-redux routine notwithstanding, he maintains the stubbornly unblinking support of many conservative white evangelicals. Still, some have in fact blinked; Moore just lied about it. His wife Kayla recently posted on her Facebook page a fiery endorsement letter from over 50 pastors, who praised Moore as “an immovable rock in the culture wars… a warrior for the unborn child, defender of the sanctity of marriage and champion for religious liberty.” The next day, some of them furiously protested the letter was just a copy of an earlier expression of support during the Senate primary – ie: before the slimey stories of pedophile had emerged. Since then, several have demanded their names be removed. Let’s hope God hears the prayers of those sinners who remained.
Goofily racist
The most recent – and in a twisted kinda way most entertaining – transgression was a shiny, new, fake robocall that went out in Alabama. Aiming to discredit the original WaPo story about Moore’s predatory past, the speaker was a purported WaPo reporter seeking middle-aged women “willing to make damaging remarks about (Moore) for a reward of between $5000 and $7000.” The anti-Semitic dog-whistle kicker: The so-called reporter’s name was “Bernie Bernstein,” which later morphed into “Al Bernstein.” Quickly hearing about it, the Post issued a statement: “The call’s description of our reporting methods bears no relationship to reality.”
Still, the prank was so crude, so dumb, so goofily racist that Twitter – including many journalists and Jews – gleefully picked up the Bernie Bernstein shtick and ran with it. Samples: “I know that guy – he took over for Shylock Geltgrubber….Did he go to Brandeis? Does he know David Cohen?…Hello. It is The Jews. We have money. Please telephone us…It was actually me, Brian B. Levinson. (I) sounded garbled because I was eating matzah made with the blood of gentile babies when I recorded the call.” And our favorite: “Why not just stick with Jewy McJew?” After the grisly gags, the sorry truth about Roy Moore and his party remains. From a son of Alabama in Rolling Stone: “If this isn’t rock bottom, pray that a comet hits Earth before we reach it.”

They have no idea why and don’t want to talk about it.

WASHINGTON ― Senate Republicans are increasingly lining up behind the women accusing Alabama Senate candidate Roy Moore (R) of sexual misconduct, saying he shouldn’t be able to serve given the disturbing allegations against him.

“The women who have come forward are entirely credible,” Senate Majority Leader Mitch McConnell (R-Ky.) declared Tuesday. “He’s obviously not fit to be in the United States Senate.”

But ask those Republicans if they believe the women who accused President Donald Trump of sexual assault, and the conversation is over.

For now, Republicans insist that Moore’s accusers are enough proof that he doesn’t belong in the Senate ― even if they can’t explain why they don’t see Trump’s accusers as just as credible.

“Look, we’re talking about the situation in Alabama,” McConnell told HuffPost, when asked about Trump’s accusers. “I’d be happy to address that if there are any further questions.”

Moore’s scandal has put his party in an incredibly uncomfortable predicament: the more Republicans say the allegations by five women against Moore are proof that he doesn’t belong in the Senate, the more hypocritical they look for ignoring the 16 women who have accused Trump of sexual assault and helping him become president.

The White House position on the president’s accusers is that they are all liars. Trump denied all of the allegations again last month, calling them “fake news” and “made-up stuff.”

So why do Republicans believe Moore’s accusers but not Trump’s? HuffPost spent Tuesday asking GOP senators why the situations are different. Few could offer a convincing argument, instead opting to shrug their shoulders, pivot or abruptly walk away. …

President Donald Trump gave a blow-by-blow recounting of his trip to Asia on Wednesday when reporters were anxious to get a word from the president about embattled Republican Senate candidate Roy Moore.

After reading from a Teleprompter — and fumbling Marco Rubio-style with a bottle of water — Trump said thank you to the audience and said “God bless the United States of America,” turned away from the podium and left the room.

Reporters shouted questions about Moore, but Trump refused to respond.

Watch the video, embedded below:

Link to Story and 50-Second Video