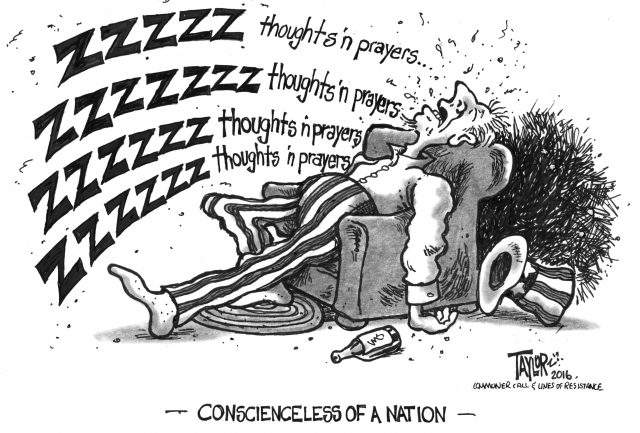 Editor’s Note: The Commoner Call runs this cartoon after every headline-grabbing mass shooting (a mass shooting – defined as four or more fatalities – happens daily in the U.S. Most only get local press coverage). Nothing changes but not to worry, the nation’s leaders will keep you in their cynical thoughts ‘n empty prayers if you lose a loved one to a mass shooting. What evil madness! What political cowardice!  – Mark L. Taylor

People online tore into President Donald Trump after he appeared to offer his condolences on Twitter about the wrong mass shooting.

The deadly incident at the First Baptist Church in Sutherland Springs, Texas, took place on Nov. 5. So it appears Trump ― or a staffer ― mistakenly resent a tweet his account shared in the aftermath of that attack:

May God be w/ the people of Sutherland Springs, Texas. The FBI & law enforcement are on the scene. I am monitoring the situation from Japan. 2:06 PM – Nov 5, 2017

…Or, Trump meant to comment on Tuesday’s shooting at the Rancho Tehama Elementary School in northern California which left at least four people dead and several injured, but he included the wrong town in his post.

The tweet was timestamped at 11:34 p.m. and remained live as of early Wednesday morning.

People online were quick to express their anger over the blunder …

An explosive new book promises to blow the lid off a volatile White House that skidded from crisis to crisis in the first nine months of Donald Trump’s administration and is awash with intrigue “so corrosive and lethal” it threatens to “paralyze the new presidency”.

Provocative media critic and columnist Michael Wolff has written what is billed as the first inside account of the inner workings of the Trump White House in a “shocking, fly-on-the-wall” account that portrays a fiery but inexperienced president surrounded by warring factions of advisors and officials.

“My goal was not to write as an outsider looking in, but to find out what the insiders were really thinking and feeling,” Wolff told the Guardian on Tuesday.

Sources say Wolff was present at critical junctures, including the morning in May when FBI director James Comey was fired without apparent forewarning from Trump to any of his West Wing inner circle.

The author, who has known Trump since his days as a reporter at New York Magazine, began showing up at the White House soon after the inauguration last January. He found a relatively porous environment, with most figures relatively accessible and able to speak freely, the Guardian has learned.

His access, while not entirely official, came after he’d written up an interviewwith Trump in the Hollywood Reporter seven months earlier. Sources say Trump liked the story and commented “cool cover”, at the time.

Wolff set out to write the book as an account of someone chatting in a fairly open way with most of the players in a unique period of US governance.

“While most people took the position that everyone should be hostile to these people, I was not particularly hostile. That allowed me to get them to be relatively open,” he told the Guardian.

The point is, he continues, “I showed up with no agenda. I was there out of curiosity, and I got there by leveraging an amount of goodwill I had with these people.” …