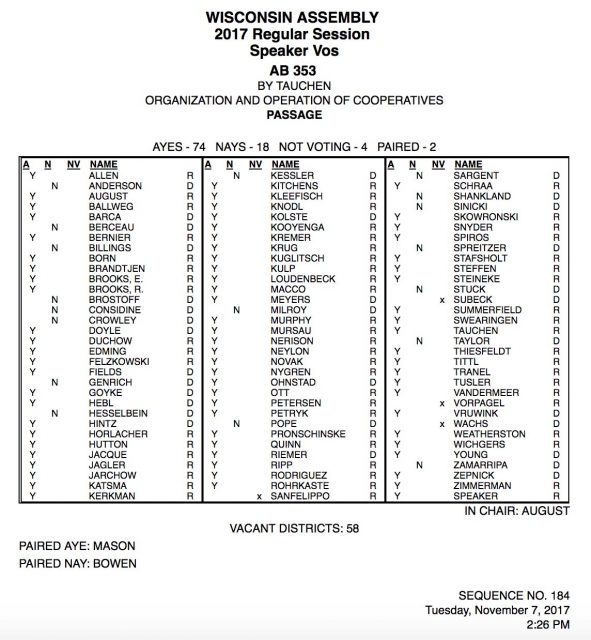 Remember. Remember come next November — Lee Nerison’s betrayal of our democratic, member-run cooperative principles.
Lee Nerison voted for AB353 which will allow up to “20 percent of your co-op’s board seats to be turned over to non-members (including outside investors)”* and remove “members’ rights to review certain cooperative records. Because all voices are equal in the co-op model, we can be certain that ideas can be discussed; that no ideas are silenced.”*
Lee’s vote served “to alter that ‘one member, one vote’ co-op model that gives voice to all members as equals, regardless of where their farm or enterprise presently stands on the continuum of ﬁnancial success, patronage or tenure.”*

AB353 was backed by agriculture, electric cooperatives and propane dealers. Together they have contributed about $447,200, since 2011, to legislative and statewide candidates. Among the top recipients of campaign cash from these special interests were:

Mike McCabe, candidate for governor, warns about the effects of Lee Nerison’s vote on our cherished local co-ops: “It grants the corporatization of co-ops and allows big money to creep into these locally oriented organizations.
Remember. Remember come next November —
VOTE DEMOCRAT and end the tyranny of one party rule.
About the bill
* AB 353 Undermines Co-op Principles
** Bill Would Change How Coops Operate