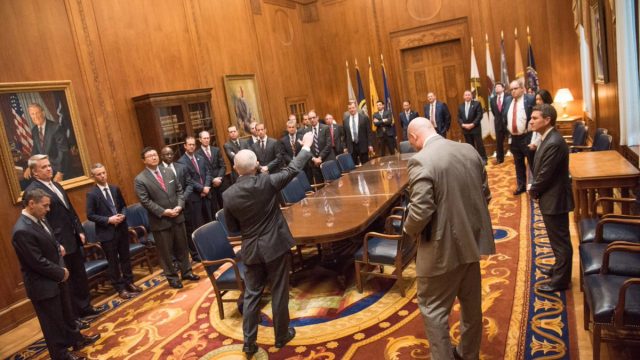 On Wednesday, the Justice Department shared photos of Attorney General Jeff Sessions welcoming new U.S. Attorneys in a tweet that was regrettable for reasons that go beyond Sessions’ arm angle.

Of the 27 people visible in the photos, just one is a woman. [And only one African American. – Ed.]

The gender disparity in the photos isn’t a fluke — it reflects how few women Trump has nominated to serve as the country’s top federal prosectors.

In mid-September, CNN reported that just one of the 42 U.S. attorneys Trump had nominated to that point was a woman. According to White House press releases, Trump has made 11 U.S. attorneys nominations since then. Just two of them are women.

This problem didn’t originate with Trump. President Obama’s also nominated more men than women to serve as U.S. attorney, but he disparity was nowhere near as pronounced it is under Trump. According to CNN, Obama nominated a total of 109 U.S. attorneys, with 24 of them being women.