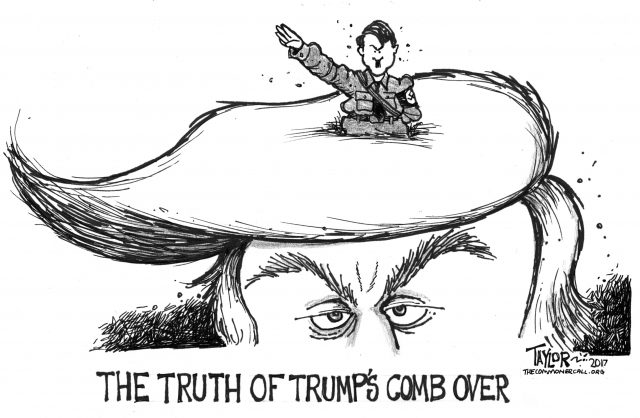 It’s plague time in America. We’ve reacquainted ourselves with the wannabe centurions of white supremacy: their faces, their weapons, their torches. We have a new notion of what homegrown American fascism could look like in the 21st century. We can see it all too clearly here in Vice‘s low-light reel from Charlottesville.

The sense of a dreaded illness engulfs us, as the classic novel of Europe’s 20th century fascist breakdown warned us. Albert Camus’ Plague closes on the doctor’s note that the germ of our problem never dies or disappears:

“it bides its time in bedrooms, cellars, trunks, and bookshelves; and that perhaps the day would come when, for the bane and the enlightening of men, it would rouse up its rats again and send them forth to die in a happy city.”

A similar plague is testing us now, with no signs of hope or help coming from the White House. We know that those obnoxious nationalists of the alt-right with their klan and nazi banners feel comfortably in tune with the man in the White House. We also now see that Drumpf could happily serve as president of their confederacy.

For guidance through this maelstrom, we turn first to Peniel Joseph—historian of black power and biographer of Kwame Ture (aka Stokely Carmichael)—to relearn the lessons of the Civil Rights Movement and later responses to the non-violent model of resistance.

We’re looking for wisdom from Nikhil Pal Singh, the Indian-born scholar of black radicalism and the international dimensions of the struggle for liberation. He reads our current moment, in part, through the lens of a globalized economy: a desperate sense of loss inflaming racial tensions for working-class Americans, with the financial elites stoking the flames.

“What’s happened to the American working class as a whole during the period of the 1990s and 2000s is that there has been a dramatic kind of downscaling and the recognition has been belated by American elites who did not respond to this generational crisis. And Drumpf swoops and tells a certain kind of story about it that seems plausible because it plays to a sense of victimization — but, also, a sense that the enemies are these nefarious forces who have stolen their birthright. But, actually, the people who’ve stolen their birthright are very, very close to home.”

For a read on the new faces and forces in American fascism, Southern Poverty Law Center president Richard Cohen gives us his anatomy of the alt-right movement. In studio, we’re also joined by the staunch free-speech defender Wendy Kaminer, preacher Mariama White-Hammond, poet Adam Fitzgerald, and the novelist James Carroll.

Link to Story and 50-Minute Audio

A one-time drug dealer, candidate for Congress and aspiring stand-up comedian, Christopher Cantwell now hosts Alt-Right luminaries such as Matthew Heimbach, Augustus Invictus and Andrew Auernheimer, aka, Weev, on his call-in talk show “Radical Agenda,” which is live-streamed via Facebook and UStream three days a week from his home studio in Keene, New Hampshire.

On his show and in mordant essays published on his website Christophercantwell.com, this 36-year-old self-proclaimed fascist – whose style borrows from such mainstream shock jocks as Howard Stern and Opie and Anthony — argues for an Anglo ethno state free of African-Americans, Jews and non-white immigrants, save, perhaps, for the occasional exception.

In Cantwell’s world, Blacks are prone to violence and have lower IQs; Jews spread communism and can’t be trusted; immigrants are outbreeding whites; and a race war is all but inevitable.

Cantwell has called for the violent overthrow of the U.S. government, and, in previous years, for the assassination of ordinary law enforcement officers and other government workers. Democrats and “communists” need to be “physically removed” from the country, Cantwell insists, and white men should consider polygamy to increase number of Caucasian babies being born.

Cantwell’s violent rhetoric and racist statements have gotten him kicked out of one libertarian organization after another, and with each ouster, he has moved further and further to the right, culminating in his alliance with neo-Nazis and white supremacists, and earning him a loyal, paying audience of haters.

“[M]y goal here is to normalize racism,”  he explained to Hatewatch in one of two interviews for this profile. “I’m going to make a commercial enterprise out of saying things that people want to make illegal. I’m going to make a whole fucking bunch of money doing it. Anybody who gets in my way is going to find themselves in a very long list of people who regretted underestimating me.”

Though his hatred of law enforcement and the state has waned as he has drifted ever rightward, Cantwell’s corrosive rhetoric occasionally spills over into real life. Combined with an admitted history of alcohol and drug abuse, it makes for a volatile combination, as Cantwell’s influence expands and his participation in Alt-Right and neo-Nazi events increases.

Cantwell grew up in Stony Brook, New York, an upscale hamlet in Long Island’s Suffolk County. In his conversations with Hatewatch, he related that his father was once an air traffic controller — a fact apparently confirmed by his father’s name in a roster online for the National Air Traffic Controllers Association. Cantwell said that President Ronald Reagan fired his dad in 1981, part of a mass termination of more than 11,000 striking members of the air traffic controllers union who had refused the president’s order to return to work.

For a while, Cantwell  said his father had to make do “mowing lawns and shit,” while his mother kept house and attempted, unsuccessfully, to raise him as a Catholic. Meanwhile, he went to school “with a bunch of rich assholes,” ran with a bad crowd and ended up involved “in a lot of crazy shit,” which resulted in incarceration when he was 19.

“I was involved in so much bullshit when I was a teenager, honestly, that like what I got caught for was the least of the shit I did,” he told Hatewatch.

DWIs and run for congress

When, in 2009, he announced a run for the U.S. House as a Libertarian in New York’s First Congressional District, he admitted to his past on his website VoteforCantwell.com. But by that time he had racked up another DWI and, because it was his second in less than 10 years in New York state, was facing a possible felony conviction and four years in jail.

Cantwell’s congressional campaign floundered, and he failed to gather the signatures necessary to place his name on the ballot. On the DWI, he took a plea deal, and was sentenced to 45 days incarceration, of which, he says he served 28.

A theme was forming. Cantwell’s struggles with substance abuse and his legal battles over his DWI produced in him a fervid loathing of all government authority, a tendency toward extremist rhetoric and an embrace of first libertarianism, then anarcho-capitalism and finally full-throated fascism.

The intertwining of these strands in Cantwell’s life were illuminated by Cantwell himself in a June 14, 2014 address that he gave before a convention of the Libertarian Party of Suffolk and Nassau Counties in New York.

The speech, titled “How the Libertarian Party Saved My Life,” was a sort of confessional, delivered by a then-chubby, redfaced Cantwell, whose online tagline at the time was “Anarchist, Atheist, Asshole.” In the speech, he described the details of his two DWIs, and the injustice he perceived as having been done to him on both occasions.

Cantwell said the first DWI occurred when a cop caught him trying to sleep off a drunk in his car. This inspired  him to study the U.S. Constitution and the law, “in between blackouts.” In doing so, he came to the conclusion that the government “is a violent, evil monster,” which had to be stopped. Alas, he was “just one alcoholic on the verge of homelessness” and hardly capable of fomenting revolution.

“My mind went to very dark places,” said Cantwell during his speech.

He claimed he seriously had considered going on a bloody rampage, “like one of these guys like Jerad Miller,” who in 2014, along with Jerad’s wife Amanda, killed two Las Vegas police officers and one civilian in an explosion of anti-government rage, with Jerad dying in a shootout with police and a wounded Amanda committing suicide.

“I was going to go out blasting,” Cantwell told his audience, “and take as many of them with me as I could.”

In his speech, Cantwell said he eventually concluded that such an action would be a waste, and after attending a libertarian/Tea Party event, got involved libertarian activism, which led to his Quixotic Congressional campaign. He had found, “something to live for” in the Libertarian Party.

He later declared that he now  was an anarchist and that he was leaving New York for New Hampshire, a hotbed of libertarian activism.

Actually, Cantwell had already been spending a lot of time in and around the town of Keene, New Hampshire, heavily involved in libertarian events and social circles there. He quickly earned a rep as a controversial figure, sometimes advocating for violence against the state and its agents, and in turn being shunned because of that stance. He also earned a rep as a heavy drinker, and was criticized online for driving while intoxicated and being loaded at Keene events. …