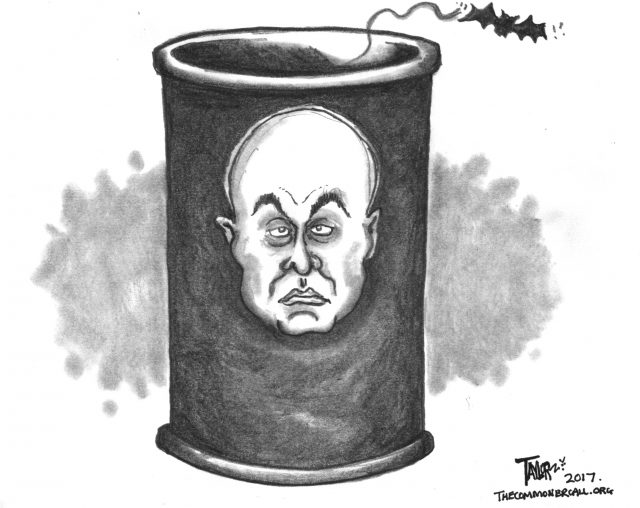 But it should not have been a surprise. Any examination of Kelly’s past public remarks makes clear he is not a sober professional, calculating that he must degrade himself in public so he can remain in place to rein in Trump’s worst instincts behind the scenes. Rather, Kelly honestly shares those instincts: He’s proudly ignorant, he’s a liar, and he’s a shameless bully and demagogue.

The chief of staff in an administration headed by any halfway-normal human being would have said: “The president is deeply concerned by news reports that he miscommunicated his condolences when speaking with Sgt. Johnson’s wife Myeshia. He hopes to talk to her again as soon as she feels able, to apologize and make this right. And while he would have preferred that Rep. Frederica Wilson had not spoken publicly about what he intended to be a private call, he appreciates her personal connection to Sgt. Johnson and that she is mourning his loss as well.”

There’s a reason these two men found each other. They see the world in fundamentally the same way, and Kelly is going to help Trump do what he wants to it.

Instead, Kelly did not express any concern for the well-being of Johnson’s widow and family. He did not acknowledge any possibility that Trump had done something wrong, even inadvertently. He engaged in a Trumpian scorched-earth attack against Wilson, claiming to be appalled that she had “listened in” on the conversation — when obviously she could not have avoided hearing it while in a car in which it was on speakerphone — and making up a story about her statements at a public appearance in 2015. He metaphorically dug up every body in Arlington National Cemetery to use them as human shields for Trump. And he interspersed all this with rambling, Strangelovian remarks about how women, life, and religion used to be “sacred” in America but are no longer – and hence “there’s nothing in our country anymore” that indicates that it’s worthy of sacrifice.

Wilson immediately responded that Kelly “is willing to say anything” because he’s “trying to keep his job.” But in fact all the evidence suggests that she is wrong, and Kelly said what he did because he believes it.

This can be seen most clearly in a celebrated speech Kelly delivered on Veterans Day in 2010 while still a Marine Corps general. It demonstrates conclusively that, long before Kelly and Trump ever met, they were on the same page when it comes to hysteria and venom. (Kelly’s son Robert had been killed in action in Afghanistan just days before, but Kelly said identical things both before and long after his son’s death.)

So here’s Kelly’s worldview, as expressed in 2010:

1. No one outside of the military can legitimately question any of America’s wars.

“If anyone thinks you can somehow thank [members of the military] for their service,” Kelly proclaimed, “and not support the cause for which they fight — America’s survival — then they are lying to themselves and rationalizing away something in their lives, but, more importantly, they are slighting our warriors and mocking their commitment to the nation.”

Kelly’s words would be an excellent way to teach ninth graders what the phrase “begging the question” means. Critics of U.S. foreign policy of course do not accept Kelly’s axiom that the military is fighting for “America’s survival.” And indeed it appears Defense Secretary James Mattis and Secretary of State Rex Tillerson don’t either – they reportedly informed Trump that America’s military (and its intelligence and diplomatic apparatus) exist to support the expansion of U.S. corporations.

Furthermore, Trump himself famously questioned the Iraq war. Kelly has yet to speak on whether Trump, Mattis, and Tillerson are all slighting and mocking the military.

Most importantly, Kelly has all of this completely wrong. What’s most impressive and significant about the U.S. military is its 230-year unbroken commitment to civilian rule. That is, people who join the military accept that “the cause for which they fight” is not up to them. That’s truly admirable.

But Kelly would never say that, because it would make clear that criticism of U.S. wars isn’t about low-level military personnel but America’s political leadership. And he evidently does not believe current U.S. foreign policy would survive open, honest debate. So he uses the same banal, childish, crude intimidation technique beloved by right-wing militarists everywhere though history.

2. No one who is in the military ever questions any of America’s wars.

“America’s civilian and military protectors both here at home and overseas have for nearly nine years fought this enemy to a standstill and have never for a second wondered why,” Kelly said in 2010. “America’s warriors have never lost faith in their mission, or doubted the correctness of their cause.”

This is a preposterous lie. No one who’s ever been in the military, or knows more than three people who have, honestly believes this. Soldiers are thinking human beings, not mindless patrio-trons. Again, what’s most praiseworthy about members of the American military is that many do wonder why they’re doing what they’re doing, but understand that their orders ultimately come from elected civilians.

And obviously many of the most coruscating critics of America’s wars have come out of the military. Kelly should look up his fellow Marine Corps general Smedley Butler, author of “War Is a Racket.”

3. America and its wars are and have always been good.

According to Kelly’s speech, the United States has never gone to war “to build empires, or enslave peoples, but to free those held in the grip of tyrants. …  The only territory we as a people have ever asked for from any nation we have fought alongside, or against, since our founding, the entire extent of our overseas empire, are a few hundred acres of land for the 24 American cemeteries scattered around the globe.”

Apparently Kelly never walked by any of the Pentagon’s Comanche, Chinook, Cheyenne, Kiowa, or Lakota helicopters and wondered, Hey, who are these things named after? …

White House chief of staff John Kelly got every important point wrong last week when he attacked Rep. Frederica Wilson, D-Fla., for a speech she made more than two years ago.

Kelly, digressing from an effort in the White House press room Thursday to rehabilitate President Donald Trump’s controversially inartful condolence call to the family of slain Sgt. La David Johnson, turned on Wilson, who had overheard the call on speaker phone and spoken critically about it to the media. …

…At best, he was extremely careless with the truth when he embroidered his account with specifics that he didn’t recall accurately. At worst he flat-out lied in an effort to deflect criticism of his boss, thinking there wouldn’t be a video record to expose his treacherous deceit. …