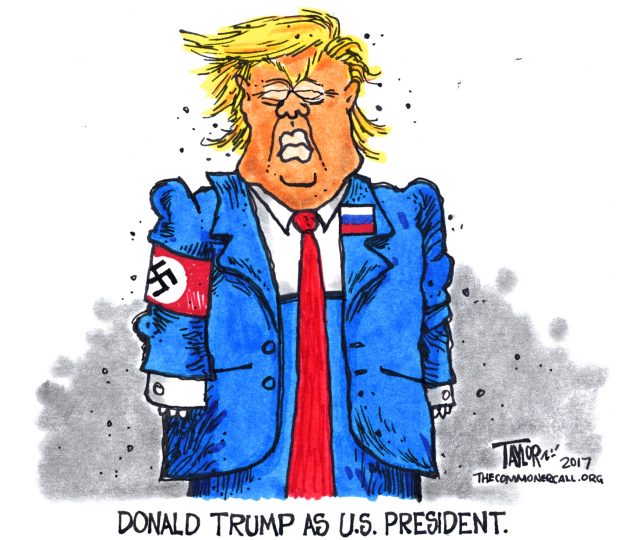 Everybody’s Talking About It: For Trump, Words Are Stupidest, Dumbyist, Poo-Poo Things, Ever!

Not quite the soaring rhetoric of his illustrious forebear but succinct.

Soames rightly was objecting to a Trump tweet that tried to link a 13 percent rise in the crime rate in England and Wales to radical Islamic terrorism, a notion that the president may have picked up from a conspiracy website. The UK Office for National Statistics that issued the actual crime numbers denied there was any connection, leading many other British politicians to denounce the presidential tweet, including former Tory prime minister David Cameron, who described Trump’s words as “divisive, unhelpful and quite simply wrong.”

Words. “I have the best words,” Trump famously proclaimed during the campaign, and just the other day he told Maria Bartiromo of Fox News how “well-crafted” his goofy tweets are. The same man announced from the White House lawn on Wednesday that “I’m a very intelligent person” – words that sounded more self-deceptive than presidential.

“The man who cannot say what he has to say in good English cannot have very much to say that is worth listening to.” – Winston Churchill

Trump does have a way with words. Unfortunately, it’s a gruesome way. His way is to use them as a blunt instrument to bully and belittle opponents. The rest of the time – when he’s not reading prepared remarks from a teleprompter – his way with English is fumbling, incoherent, reckless and untruthful. Look no further than the contretemps that began with his false claim that unlike him, “most other presidents” didn’t make phone calls to the families of military killed in action, which then rapidly nosedived even further, using the dead as a political football, then insulting the widow of a dead Green Beret hero and a Florida congresswoman.

“Ham-handed,” historian, retired officer and Gold Star father Andrew Bacevich said of Trump’s phone call to the wife of slain Sgt. La David Johnson. “The president’s inability to use the English language is really without precedent in American politics.”

The president’s negligible grasp of his native tongue may be part of the reason we’ve been so taken the last couple of weeks by eloquent speeches from former Presidents Barack Obama and George W. Bush as well as Arizona Sens. John McCain and Jeff Flake, all of whom articulated – without mentioning Trump’s name – deep concern about the current state of the nation and the planet.

“To fear the world we have organized and led for three-quarters of a century, to abandon the ideals we have advanced around the globe, to refuse the obligations of international leadership and our duty to remain “the last best hope of Earth” for the sake of some half-baked, spurious nationalism cooked up by people who would rather find scapegoats than solve problems is as unpatriotic as an attachment to any other tired dogma of the past that Americans consigned to the ash heap of history.”

“We know that when we lose sight of our ideals, it is not democracy that has failed; it the failure of those charged with preserving and protecting democracy… Our governing class has often been paralyzed in the face of obvious and pressing needs. The American dream of upward mobility seems out of reach for some who feel left behind in a changing economy. Discontent deepened and sharpened partisan conflicts. Bigotry seems emboldened. Our politics seems more vulnerable to conspiracy theories and outright fabrication.”

Words matter – an obvious notion but one that particularly strikes home not only because of those speeches and the constant reminders of Trump’s benighted language skills but also from having just finished Thomas Ricks’ book Churchill & Orwell, a thought-provoking reflection on the lives and work of Britain’s wartime Prime Minister Winston Churchill and George Orwell, author of the fable Animal Farm and the dystopian 1984 – source of “Big Brother is watching you,” thought police, Newspeak (“War is peace,” “Freedom is slavery”) and the vision of a world in which truth is subverted to the state, inconvenient facts relegated to the “memory hole.”

The connection between the pair may not be obvious – the men came from opposite ends of the political spectrum; one was flamboyant and public, the other more circumspect and private – but they were two of the 20th century’s great rhetoricians. Each had “the same qualities and tools,” Ricks explains. “Their intellects, their confidence in their own judgments even when those judgments were rebuked by most of their contemporaries, and their extraordinary skill with words.”

“… The heart of both men’s stories is in the same crucial period from the rise of the Nazis until the aftermath of World War II. In this period, when so many gave up on democracy as a failure, neither man ever lost sight of the value of the individual in the world, and all that that means: the right to dissent from the majority, the right even to be persistently wrong, the right to distrust the power of the majority, and the need to assert that high officials might be in error – most especially when those in power strongly believe they are not.”

During the war, Churchill’s words rallied Britain and the United States in the fight against fascism. At the end of his life, George Orwell produced two masterpieces warning that despite victory over Germany and Japan, totalitarianism remained a clear and present danger, as it still does today, closer to home than in decades. “Many people around them expected evil to triumph and sought to make their peace with it,” Thomas Ricks writes. “These two did not. They responded with courage and clear-sightedness.”

“… Orwell especially never stopped trying to see clearly through all the lies, obfuscations, and distractions. Instead of shaping facts to fit his opinions, he was willing to let facts change his opinions.”

Orwell believed “Good prose is like a windowpane,” but in his essay, Politics and the English Language, warned, “[P]olitical language… is designed to make its lies sound truthful and murder respectable, and to give the appearance of solidity to pure wind.” 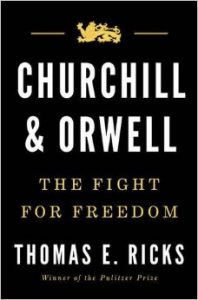 And so we have Donald Trump, who even in his muddled syntax and circumlocution still manages to convey a message that fosters anger and fear while eschewing the facts. Orwell lays it out in 1984: “The Party told you to reject the evidence of your eyes and ears. It was their final, most essential command.” All is fake news.

Bust of Orwell would be more appropriate

When Trump became president, he moved back to the Oval Office a bust of Winston Churchill. Doubtless, he regards the sculpture as a symbol of intrepid conservatism and resolve, or at least someone told him that. In any case, it’s funny to think that Trump has in his eyesight a world leader who once insisted, “The man who cannot say what he has to say in good English cannot have very much to say that is worth listening to.”

In some respects, a bust of George Orwell might be more appropriate, a reminder that this president already has brought to life some of the author’s darkest fantasies. In Trump’s Newspeak world, a climate denier is put in charge of the EPA, a foe of proper public schooling heads the Department of Education and unfortunate truths are wiped from official websites and tossed into the memory hole.

“Trump is a reductive force,” journalist Peter Ross wrote in a recent superb article about Orwell and 1984 for Boston Review. “He wants everything to be as small and mean as his own heart, and he has made a start with words.”

Note on today’s cartoon: Some might feel that tacking a Nazi arm band on Donald Trump borders on over-the-top. While Trump may not belong to one of the multiplying Nazi-based groups staining the nation, by his silence he is consenting to their actions, ugly rhetoric and violence. Trump has never understood that a president is supposed to be leader of the entire nation. His unwillingness to strongly condemn fascism is tacit endorsement of fascism and through his silence he has donned the banner. – Mark L. Taylor

Lawrence O’Donnel On ‘The Knuckleheads Running The Show’

John Boehner says most Republicans are “throwing up” over the state of the party. Lawrence O’Donnell talks with Ron Klain, Daniel Dale & Peter Wehner, who says the Trump WH can’t pass any legislation because the president doesn’t know anything and doesn’t care to.