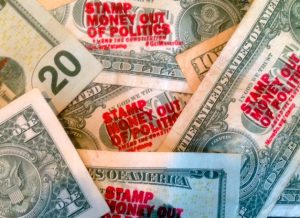 After failing to pass a “healthcare” bill that would have thrown up to 32 million Americans off of health insurance, a bill that was more unpopular than the Wall Street bailout, Donald Trump and the Republican leadership in Congress are back.

Now, they are pushing one of the most destructive and unfair budget and tax proposals in the modern history of our country – a plan that would do incalculable harm to tens of millions of working families, our kids, the sick, the elderly and the poor.

The Republican budget, which will likely be debated on the floor of the Senate this week, is the Robin Hood principle in reverse. It takes from those in need and gives to those who are already living in incredible opulence.

The Republican budget would give the richest family in America, the Walton family of Walmart, a tax cut of up to $52bn by repealing the estate tax – a tax that only applies to multimillionaires and billionaires.

Donald Trump and Republican leaders claim their plan would provide a “big league” tax cut for the middle class. Nothing could be further from the truth. According to the non-partisan Tax Policy Center, by the end of the decade, nearly 80% of the tax benefits of the Republican plan would go to the top 1% and 40% would go to the top one-tenth of 1%.

Meanwhile, while the Republicans want to give a $1.9tn tax break to the top 1%, they are proposing massive cuts in programs that working-class Americans desperately need.

This budget cuts Medicaid by more than $1tn over 10 years – which would throw some 15 million Americans off of the health insurance they currently have. Further, this budget does what the Republicans have not yet attempted to do in their previous healthcare legislation and that is to make a $473bn cut to Medicare, despite Trump’s campaign promises not to cut these programs.

Poll after poll after poll tells us that the overwhelming majority of Americans do not want Congress to cut Medicare or Medicaid and they do not want to provide tax breaks to the wealthy or large corporations.

A recent Pew Foundation poll finds that 85% of Republicans and 94% of Democrats want to either maintain or increase funding for Medicare. And 60% of Americans oppose slashing Medicaid, according to a recent Quinnipiac poll.

Why are the Republicans bringing forth such an absurd budget that, in almost every instance, is diametrically opposed to what the American people want?