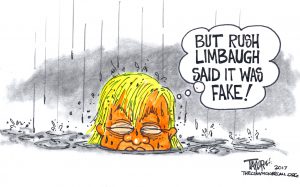 SAN JUAN, Puerto Rico — When Hurricane Maria destroyed the infrastructure of Puerto Rico, it turned the mayor of its capital city into a spokeswoman for a stranded people.

Carmen Yulín Cruz Soto told the world of the “horror” she was seeing as she waded through San Juan’s flooded streets. And the desperation on the island, parts of which may remain without power for months.

Until then, Cruz had not been a well-known politician outside the island.

Cruz worked nearly nonstop on the ground — walking the capital’s streets and doing what she could for those she met.

But after she criticized Washington’s response to the hurricane this week — “save us from dying,” she pleaded on cable network — President Trump took direct aim at her on Twitter.

“Such poor leadership ability by the Mayor of San Juan,” he wrote Saturday. Democrats must have told her to say nasty things about him, he claimed.

Since the president brought it up, we present below the historical record of the leadership of Cruz, before and after the storm. …

Read the Rest and Link to Videos