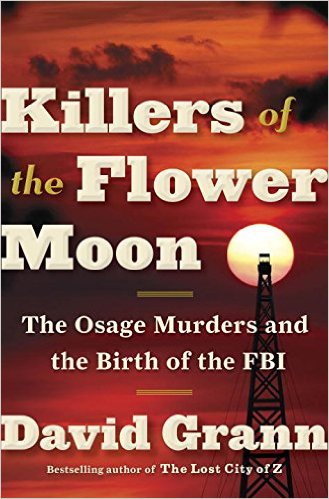 David Grann, bestselling author of “The Lost City of Z,” returns with the story of a little-remembered crime that modernized investigative procedure in the United States.

In “Killers of the Flower Moon: The Osage Murders and the Birth of the FBI,” Grann tells a gripping tale of greed, prejudice and callousness. This is for fans of American history, true crime and rip-roaring storytelling.

David Grann is a #1 New York Times bestselling author and an award-winning staff writer at The New Yorker magazine.

MPR’s Stephen Smith hosted the event for the Thread Book Hour, at the Fitzgerald Theater on April 20, 2017.

Link to Story and 51-Minute Audio

Killers Of The Flower Moon By David Grann – Review

Sometimes Cormac McCarthy writes a great American novel; every so often the Coen brothers make a great American film – and in the best traditions of American journalism, someone comes up with a story that cuts to a kernel of the national narrative; here is one of those.

The timing of David Grann’s historical investigation into the systematic murder of Osage Native Americans in Oklahoma during the first quarter of the 20th century could not be more cogent. In the time it took to write his own signature, President Donald Trump in January negated months of protest, and a rare victory, by the Standing Rock Lakota nation in stopping a gas pipeline through sacred lands and a reservoir crucial to the tribe’s water supply. Trump overturned a moratorium on the pipeline, which now proceeds regardless of the Native nation’s ancestral rights and traditions, wellbeing and sensibilities.

Grann’s story is an ancestor to this tragedy: about how the cynical greed of the initial oil rush, and quick money it promised, led to a sinister – but also singular — persecution and mass murder of the Osage.

We are horribly accustomed to histories of the obliteration of culturally and spiritually rich Native nations who have little care for monetary wealth, and the entrapment of the survivors on barren “reservations”. This, however, is the story of a nation, the Osage, driven on to what the white man thought was another patch of dust; but beneath which, it emerged, lay one of the richest oilfields in America. The Osage had an inkling of this, and were wise enough, in their treaty of subjugation, to retain rights to whatever lay below the ground ceded to white man’s law.

The deception and destruction of those people was multilayered. …