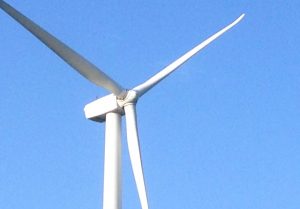 Last week I predicted it wouldn’t be long before we had more news on Fortune 500 wind power purchases. Well, a whole seven days passed before there were new deals to report.

General Motors (GM) just announced wind power purchase agreements with projects in Ohio and Illinois. The automaker is buying enough wind-generated electricity to power the Ohio and Indiana factories that build the Chevrolet Cruze and Silverado, and the GMC Sierra.

“Technology is driving solutions for mobility and safety in our vehicles, as well as the new energy solutions that build them,” said Gerald Johnson, GMNA vice president of manufacturing and labor. “This is the way we do business: offering vehicles that serve our customers’ lifestyle needs while providing sustainable solutions that improve our communities.”

GM already has plans to soon power 100 percent of its Arlington, Texas, plant using wind, where more than 100,000 SUV’s are made every year. Wind’s low cost, down 66 percent since 2009, has made it an attractive option for GM as it works toward meeting its 100 percent renewable goal.

Other buyers jump on the bandwagon

GM isn’t alone in the headlines this week. Kimberly-Clark, maker of products like Kleenex and Huggies, also announced a new wind deal in recent days. The company will soon source about 33 percent of its electricity needs from wind farms in Oklahoma and Texas.

Why wind power makes sense for the Fortune 500

Two recent reports looked at why companies like GM and Kimberly-Clark are pouncing on wind power.

David Gardiner and Associates examined the recent trend of manufacturers committing to buying renewables in a new report entitled “The Growing Demand for Renewable Energy among Major U.S. and Global Manufacturers.”

David Gardiner and Associates surveyed 160 large U.S. manufacturers, finding that 40 currently have a renewable energy goal in place, and 18 of those 40 have 100 percent renewable targets.

Eighty-four percent of respondents plan to actively pursue or consider directly buying renewables over the next five to 10 years, and 43 percent plan to be more aggressive in the next 24 months. Sixty-five percent report price as a leading factor in determining purchases.

So yet again, expect to hear more on this trend before long.

Puerto Rican Farm Powers On After Hurricane Thanks to Solar Energy

An ornamental plant farm in Barranquitas, Puerto Rico that was wrecked by Hurricane Maria is slowly rebuilding thanks to solar panels that power the 40-acre nursery.

Cali Nurseries grower Hector Santiago told Reuters that his $300,000 investment on 244 solar panels six years ago has allowed him to continue working.

Meanwhile, only 5.4 percent of citizens on the U.S. territory have electricity after the Category 4 storm destroyed the island’s electricity grid, the Department of Defense said Wednesday.

“Everybody told me I was crazy because it was so expensive. Now I have power and they don’t,” Santiago explained.

He added to Reuters that 25 percent of the panels were damaged by flying debris but the remaining panels were enough to power the facility and water pumping from his two wells.

The nursery also did not “have to worry about trees falling on the power lines” during the Sept. 20 hurricane, he pointed out.

Santiago, who sells his flowers at places like Costco in the Caribbean, told ABC News last week that he was determined to rebuild and get back into business despite estimated losses of $1.5 million.

Officials estimate that some areas of the Puerto Rico, which is almost entirely powered by fossil fuels, will not see their electricity restored for months.

At the same time, energy experts and business leaders have discussed the potential of renewables and building microgrids to help the hurricane-ravaged Caribbean restore power in the interim and the future.

“Growing demand for more resilient power supplies will spur $22.3 billion of global investment in battery-backed local energy systems over the next decade, according to Navigant Research.

Villages and homes in far-flung places will drive the expansion of microgrids, small-scale solar systems with batteries that can retain power until it’s needed. Navigant expects 14.9 gigawatts to be in operation in 2026, up from 238 megawatts this year, according to a report Tuesday.”

Last week, Tesla made headlines after sending “hundreds” of its Powerwall battery packs to be paired with solar panels to Puerto Rico ever since the storm cleared.

Virgin Group’s Richard Branson, who faced two damaging hurricanes in a row from his home in the British Virgin Islands, has met with government representatives from Britain and the U.S. to set up a green fund to rebuild the Caribbean.

“As part of that fund we want to make sure that the Caribbean moves from dirty energy to clean energy,” Bransontold Thomson Reuters Foundation.