Let’s take a look at the recurring focus on Russian use of Facebook, Twitter and Google to influence the election in Donald Trump’s favor.

Facebook has been a point of focus for some weeks now. Long enough for a more thoughtful review of what we’ve learned to date. Over at the New York Times contributing op-ed writer Zeynep Tufekci wrote of Zuckerberg’s Preposterous Defense Of Facebook.

The serious questions for and about Facebook has been the Russian accounts that supported Trump. Trump has tried to change the narrative by adding his own attack of Facebook offering that “Facebook was always anti-Trump”. This gave Zuckerberg the opportunity to be the victim:

Sadly this is just another attempt to not come clean or accept responsibility. The author offers this in turn while referring to Zuckerberg’s defense as “preposterous”:

“Are you bothered by fake news, systematic misinformation campaigns and Facebook “dark posts” — micro-targeted ads not visible to the public — aimed at African-Americans to discourage them from voting? You must be one of those people “upset about ideas” you disagree with.

“Are you troubled when agents of a foreign power pose online as American Muslims and post incendiary content that right-wing commentators can cite as evidence that all American Muslims are sympathizers of terrorist groups like the Islamic State? Sounds like you can’t handle a healthy debate.

“Does it bother you that Russian actors bought advertisements aimed at swing states to sow political discord during the 2016 presidential campaign, and that it took eight months after the election to uncover any of this? Well, the marketplace of ideas isn’t for everyone.”

Trump is a master of taking control of the dialog and deflection:

“A more astute observer of American politics than Mr. Zuckerberg might consider that Mr. Trump’s comments are part of an effort to depict Facebook as anti-conservative, lest outrage about the company’s role in the 2016 election prompt the site to adopt policies that would make a repeat of 2016 more difficult.”

Trump’s narrative is his attempt to neutralize public opinion about collusion and the use of Facebook to influence the election in his favor with his standard use of ‘whataboutism’. This is his equivalent of his “some very fine people” while expressing sympathy for white nationalists following the deadly protest in Charlottesville. Or, just this past weekend, his sad commentary and characterizations of the mayor of San Juan, Puerto Rico.

Meanwhile, Twitter is now bringing forward information about how their platform was also used by Russians to influence the election for Trump.

“Twitter said Thursday that it had shut down 201 accounts that were tied to the same Russian operatives who posted thousands of political ads on Facebook, but the effort frustrated lawmakers who said the problem is far broader than the company appeared to know.

“The company said it also found three accounts from the news site RT — which Twitter linked to the Kremlin — that spent $274,100 in ads on its platform in 2016.”

That’s laughably incomplete and understated. But don’t take it from me, here is what Sen. Mark Warner (D-VA) had to say:

“Warner said Twitter’s presentation to a closed-door meeting of Senate Intelligence Committee staffers Thursday morning was “deeply disappointing” and “inadequate on almost every level.”… The company “showed an enormous lack of understanding . . . about how serious this issue is, the threat it poses to democratic institutions,” a visibly frustrated Warner said.”

Then again, maybe there’s a reason for their obviously incomplete inventory:

“The Twitter accounts, which were taken down over the past month, were associated with 470 accounts and pages that Facebook this month said came from the Internet Research Agency, a Russia-connected troll farm. Twitter said the groups on Facebook had 22 corresponding Twitter accounts. Twitter then found an additional 179 accounts linked to those 22.

“But lawmakers and analysts criticized Twitter for appearing to have accepted and looked into only the data that it had received from Facebook, rather than conducting a broader internal investigation.”

So far Twitter has not offered any clarification while assuring all they were cooperating with the congressional investigation and said, “Twitter deeply respects the integrity of the election process, which is a cornerstone for all democracies. We will continue to strengthen Twitter against attempted manipulation, including malicious automated accounts and spam, as well as other activities that violate our Terms of Service”. This sounds like something I’d hear on a support line followed by “press 2” if I want to converse in Spanish.

Here’s the stick that hopefully will be used to get to the bottom of what really happened; this is the greatest fear of these companies:

“Silicon Valley has long enjoyed a hands-off approach from regulators and has become a major lobbying force in Washington to keep things that way. But that attitude appears to be shifting quickly.”

A number of European countries have already imposed oversight and protections. Maybe the US will now do the same to achieve some accountability.

“Google Did Not Respond To Repeated Requests For Comment.”

The Washington Post article notes that Google has yet to  decide whether or not to comply with a request to testify before congress. Google remains true to form regarding any attempts at transparency. The consistent pattern with Google is to offer assurances that “if we only knew how much they were doing to protect” we’d be impressed. Their actions have always said the opposite.

The more we learn the more we see how lucrative it is for these companies to operate the way they do – by design.

Of course if the Russians were influencing the election in favor of Trump, they had to know where to direct the message. As with so many scandals in Trumplandia we once again circle back to Jared Kushner, this time regarding his shadowy data operation. Back in mid-July the folks at the McClatchy DC bureau reported Trump-Russia Investigators Probe Jared Kushner-Run Digital Operation.

This is an older article but I send it your way as a reminder of where Trump campaign collusion becomes part of the Russian use of social media:

“There appears to have been significant cooperation between Russia’s online propaganda machine and individuals in the United States who were knowledgeable about where to target the disinformation,” he said, without naming any American suspects.”

And soon we’ll learn how Kushner’s targeting came by the data needed to know “who” and “where” for best influencing the outcome of the election.

I will end with a CNN article that would be comical if any aspect of Trump collusion undermining our democracy was funny: Jeff Sessions On Russia Investigation: Media Making ‘perfectly normal’ Actions Look Nefarious 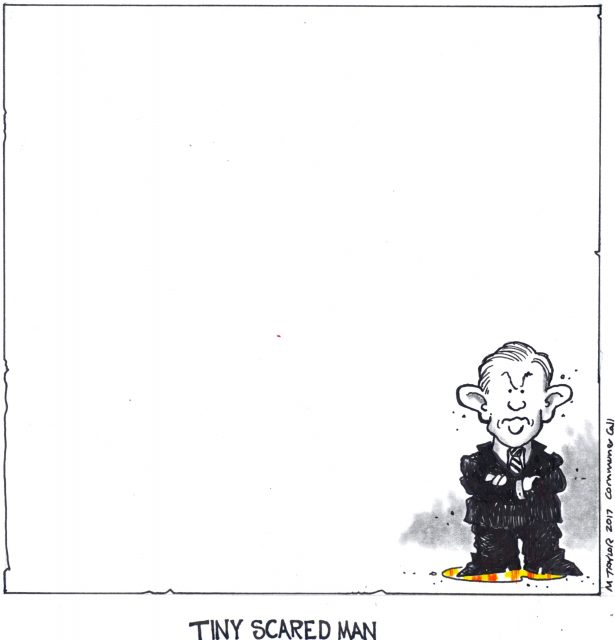 How does our Attorney General Jeffrey Beauregard Sessions III recuse himself from any investigations of Trump-Russia collusion and at the same time offer this (on Sean Hannity’s radio program this week):

“You know Sean, I’m not able to comment on this investigation,” Session said. “I would say this, that I do feel like often that the actions that are perfectly normal and natural are being projected by the media in lights that are just not justifiable, and it’s really painful to see that happening, and good people, a lot of them have had things said in ways that are not good. I can’t comment on the details of the matter, Sean.”

I wonder if “actions that are perfectly normal” extends to the meetings Sessions had with Russians and failed to disclose. It’s one thing for Kushner to have registered to vote in New York as a woman, he has a well-established limitation with forms. But shouldn’t your Attorney General know how to comply with the legal requirements of being a US senator and career ‘law and order’ politician?

I’ll sign off with this reminder of why I do this column:

“Even with hard evidence that the Russians exploited American social media for nefarious purposes, Donald Trump clings to the delusion that this Russia scenario is nothing but a plot concocted by his enemies to delegitimize his election victory.”

Zuckerberg Faces Up To facts about Russia; Trump Clings To His Delusions