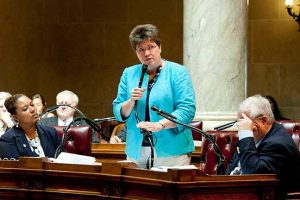 Just a few minutes ago in Black River Falls I announced my candidacy for Governor. It was an honor to be joined by so many supporters for this celebration.
If you haven’t seen our announcement video, click here to view it on our new website and share with your friends and neighbors.
I am running for Governor to turn the state’s priorities upside down.
I am running for Governor to put people first. At the center of state policy. As the top priority when it comes to spending the state’s dollars.
Right now, those systems that help people have been cut or have not kept up with rising costs. We feel these cuts in our communities. Public schools are going to referenda to keep the doors open and classes from being cut. Counties are turning roads back to gravel to keep them passable. Over four hundred thousand people in Wisconsin don’t have health insurance.
If I am elected your Governor, we will turn priorities upside down and put our people and building our communities first.
This is my vision for Wisconsin:
A state where we build from the bottom up, not from the top down.
A state with vibrant communities where people want to live, work, play, raise families and start businesses. Communities in which we all share the effort. We all share the rewards. Where everyone’s participation is honored and respected.
I am ready to run. And with your help and your votes, we will win.

State Senator Kathleen Vinehout is the latest Democrat to announce a run for governor. She kicked off her campaign in Black River Falls on Monday. She joins long list of candidates, including Milwaukee businessman Andy Gronik, head of the Department of Public Instruction Tony Evers, and Eau Claire State Representative Dana Wachs.

Vinehout says she wants to, “make people first in the state’s priorities.” She feels that Walker and Republican lawmakers focus on giving to corporations and have neglected local government and schools. Vinehout sited the Foxconn deal as just one example. Among the policies she advocates for are a $15.00 minimum wage, along with free technical and two year colleges.

In the past, Vinehout worked as both a professor and a dairy farmer. She was elected to the Senate in 2006, where she was active in both the fight for collective bargaining rights and health care for all of Wisconsin’s residents.

WORT producer Nina Kravinsky spoke with her about the upcoming campaign.

Link to Story and 14-Minute Audio