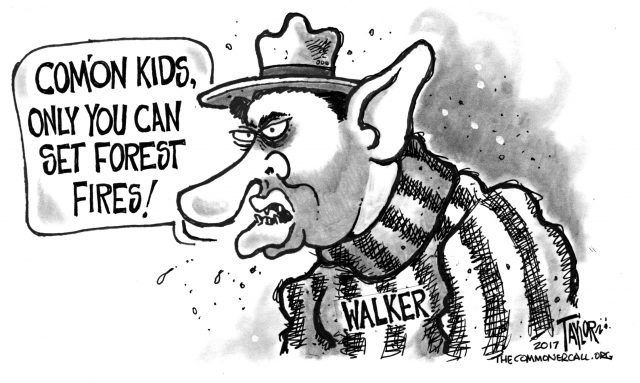 Before we found ourselves under the tyranny of Scott Walker and his GOP Hoods one party rule over this state, sportsmen and women used to have a say in our hunting, fishing and other recreational regulations. Not anymore, Walker and the Hoods know better than you what’s good for your sport. And they don’t think you should have any say in how your sport is regulated:

Due to provisions inserted into the 2017-’19 state budget, hunters in Wisconsin are no longer required to place a carcass tag on deer or turkeys they kill. In addition, waterfowl hunters no longer need to register Canada goose kills. Not part of the original proposed legislation, the provisions were added to the budget bill by the Joint Finance Committee at the request of Rep. Joel Kleefisch (R-Oconomowoc)…

“This didn’t go through the normal process for hunting rule changes and caught almost everybody, including the DNR, off guard. We only recently entered the realm of electronic registration. Now hunters no longer need to tag an animal. For people who want to violate or take advantage of the system, the door seems to be open wider than ever. And for wildlife managers, there is greater concern over erosion in the quality of data available to make decisions.” — Tom Hauge, 30 year DNR wildlife director, retired, Milwaukee Journal Sentinel (9/22/17)

Read the Journal Sentinel Story
Local control must be a four-letter word to Walker and his Republican Robbing Hoods as:
“Wisconsin Gov. Scott Walker left in place a measure that will take away the rights of municipalities to exercise eminent domain to build bike paths, bike lanes and sidewalks…”This is a power local governments have had since statehood. Yet, the Legislature and governor took it away from them by slipping it into the budget in the dark of night. No legislator even stood up to take credit for its authorship and there was no debate…
“Taking away an authority local governments have had since statehood wasn’t a major policy item? Making bike and pedestrian facilities more costly and cumbersome or forcing them to be scrapped altogether didn’t deserve more time for debate? Harming everyone’s safety by not providing more safe places to ride and walk isn’t something the public has a right to weigh in on?”
— Dave Cieslewicz, executive director of the Wisconsin Bike Federation
Read the Capital Times story
#BeSilentNoMore #GetMoneyOut #OccupyDemocrats2018
(Commoner Call cartoon by Mark L. Taylor, 2017. Open source and free to use with link to www.thecommonercall.org )