“If there was ever a time in history for a generation to be bold and to think big, to stand up and to fight back, now is that time.”

That statement is on the inside cover of Bernie Sanders’ new book, “Guide to a Political Revolution.” Bernie dedicates the book to the younger generation:

“You are in many ways the most progressive generation in the history of our country. You have opposed racism, sexism, homophobia, xenophobia, and oligarchy. You understand that greed and the grotesque level of income and wealth inequality that we experience are not what the United States is supposed to be about. You know that climate change is real, and we have a moral responsibility to take on the fossil fuel industry and transform our energy system away from fossil fuel and into energy efficiency and sustainable energy.

“What this book is about is converting that idealism and generosity of spirit into political activity. And when you do that, I have no doubt but that you and others like you will create a lot better world than the one my generation left you.”

That is what I call vision and leadership. You can agree or disagree with the senator from Vermont, but one thing you can’t deny is he is a leader with a vision for what he thinks America should become, and he is passionately trying to create that world.

I agree with Bernie on almost everything, and I believe he will be a prominent fixture in history books for generations to come. Imagine where we would be now if people had listened to Bernie and begun transforming the country 30 years ago. Everyone would have health care, a living wage, debt free college, expanded retirement benefits, clean water and air, and so much more.

These are the things that people want; they just don’t believe they will ever be the priorities of our politicians. All of this stuff exists in other countries, so it is possible. It’s all about priorities. Bernie is optimistic that younger generations have these priorities and will make them a reality.

The target audience of the book is teenagers, but Bernie says that includes the young at heart. Bernie is included in that group – despite his age, he is still an optimistic dreamer who, unlike most people, is fighting to make his dreams for our world come true.

This is the book that political science professors will have their students read to define progressive politics in our generation. No president has had more success furthering the liberal cause since Franklin Delano Roosevelt. I guess a case can be made for LBJ’s war on poverty, but was that really his initiative?

Bernie Sanders lays out what he believes on the issues in this book in simple language. It is not a literary masterpiece, but it is a political masterpiece.

The GOP will not be happy when this book hits the Times bestseller list. It is truly a blueprint for their demise.

To order the book, go here. 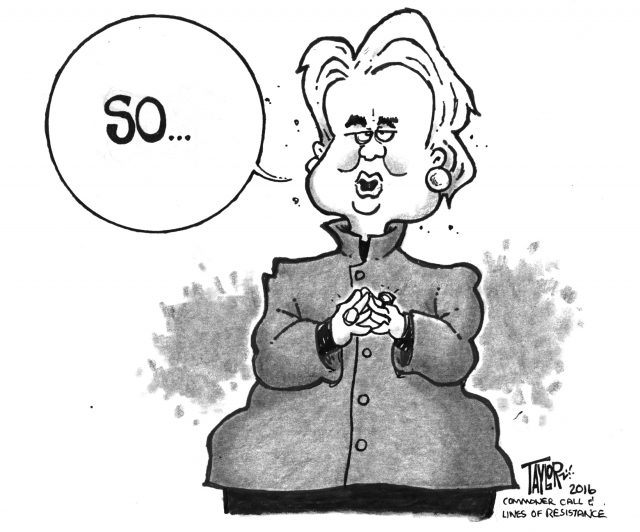 Don’t Blame Me!  Worst Candidate Ever Blasts Sanders For ‘lasting damage’ In 2016 Race

(CNN) Hillary Clinton casts Bernie Sanders as an unrealistic over-promiser in her new book, according to excerpts posted by a group of Clinton supporters.

She said that his attacks against her during the primary caused “lasting damage” and paved the way for “(Donald) Trump’s ‘Crooked Hillary’ campaign.”
Clinton, in a book that will be released September 12 entitled “What Happened,” said Sanders “had to resort to innuendo and impugning my character” because the two Democrats “agreed on so much.”
The excerpts represent a small number of the roughly 500-page book in which Clinton reflects on her stunning loss to Donald Trump in 2016. The few pages on Sanders are also remarkably candid for a candidate who was more known for being careful than blunt, especially when it came to the Vermont senator. …
Read the Rest and 1+-Minute Video
(Commoner Call cartoon by Mark L. Taylor, 2017. Open source and free to use with link to www.thecommonercall.org )