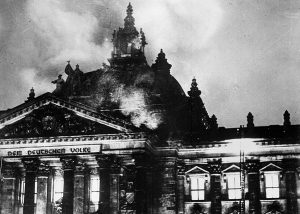 The 1933 burning of the Reichstagg was the tipping point to the Nazis taking full reign of the German government. A lot of evidence suggests that the Polish communist convicted of the arson was a patsy and the Nazis themselves torched the building to trigger a crisis justifying suspension of normal civic rules and protections.

A chill of remembrance has come over me during this August month. It feels as if the 2017 summer breeze is being scattered by the winds of war blowing from across our world towards Britain, just like they were in 1939.

In the Middle East, Saudi Arabia eviscerates Yemen with the same ferocity as Mussolini did to Ethiopia when I was child in 1935. The hypocrisy of Britain’s government and elite class ensures that innocent blood still flows in Syria, Iraq and Afghanistan. Theresa May’s government insists that peace can only be achieved through the proliferation of weapons of war in conflict zones. Venezuela teeters towards anarchy and foreign intervention while in the Philippines, Rodrigo Duterte – protected by his alliance with Britain and the US – murders the vulnerable for the crime of trying to escape their poverty through drug addiction.

Because I am old, now 94, I recognise these omens of doom. Chilling signs are everywhere, perhaps the biggest being that the US allows itself to be led by Donald Trump, a man deficient in honour, wisdom and just simple human kindness. It is as foolish for Americans to believe that their generals will save them from Trump as it was for liberal Germans to believe the military would protect the nation from Hitler’s excesses.

I did not hear the thundering approach of war, but as an old man I hear it now for my grandchildren’s generation. I hope I am wrong. But I am petrified for them.

Britain also has nothing to be proud of. Since the Iraq war our country has been on a downward decline, as successive governments have eroded democracy and social justice, and savaged the welfare state with austerity, leading us into the cul de sac of Brexit. Like Trump, Brexit cannot be undone by liberal sanctimony – it can only be altered if the neoliberal economic model is smashed, as if it were a statue of a dictator, by a liberated people.

After years of Tory government, Britain is less equipped to change the course of history for the good than we were under Neville Chamberlain, when Nazism was appeased in the 1930s. In fact, no nation in Europe or North America has anything to crow about. Each is rife with inequality, massive corporate tax avoidance – which is just legitimised corruption – and a neoliberalism that has eroded societies.

Summer should be comforting but it isn’t this year. Looking at the young today, when I watch them in their leisure; I catch a fearful resemblance with the faces of the young from my generation in the summer of 1939. When I am out in town, I listen to their laughter, I watch them enjoying a pint or wooing one another, and I am afraid for them.

(Harry Leslie Smith’s latest book Don’t Let My Past Be Your Future is published by Constable & Robinson on 14 September.)

This Holocaust Survivor Noticed A Detail In Charlottesville That Commentators Missed

Shock and terror were a common feeling for most Americans who followed the recent tragic events in Charlottesville, Virginia.

To Jack Rosenthal, the imagery displayed in the media was something he never thought he’d see in the United States.

He is one of the 10,000 Romanians refugees who sought asylum in America after the war. At 88 years old, he continues to mourn the loss of seven family members who died in the Auschwitz concentration camp. He was the only one to survive.

Born and raised in a small farming village in northern Romania, Jack still remembers the ghettos created in the country to isolate Jews before sending them to concentration camps. “Altogether in my village, there were 26 Jewish families,” he told HuffPost. Most of them didn’t survive.

He was 16 when he was taken to the camp in Poland. Later, he was transferred to Buchenwald, a large concentration camp established on Ettersberg hill near Weimar, Germany. The oldest of five siblings, he was forced to work as a slave ― the only reason why he was kept alive until U.S. forces began to evacuate the camps’ 28,000 prisoners in 1945. After that, he came to the U.S. hoping to find a new beginning.

“After I was liberated, I thought to myself: the world has learned what terrible traces hate can bring to humanity,” he said. “And now this gives me a depressing feeling because it’s happening again, and it’s happening now.” …

Read the Rest and See the T-shirt of Concern