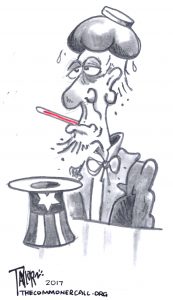 Imagine a country where you go to the doctor, he treats you, and the bill gets paid for by your tax dollars. We can create that world if we lead!

It is time to stop worrying about labels. It is time to fight for what we want and to stop backing down based on something polling as unpopular. In other words, it is time to lead and cease to be influenced by perceptions created by pollsters and Republicans.

I don’t see any of these hypocrites arguing that you should have to have insurance for the fire department or police department to come to your home. 911 operators are not asking for your insurance information before dispatching the police to your house.

The Tea Party is not suggesting privatizing the military and finding another way to fund it outside of taxes. Government-run institutions are great when they are in areas that don’t limit the financial sector’s ability to get wealthy off us. I suppose private fire departments could make a lot of money — they just wouldn’t pass the smell test or be popular if they let your house burn down because you couldn’t afford their services.

In a single payer, government-run system, the profit incentive disappears. You go to the doctor, they give the best treatment, and the government pays the bill. Just like they pay for public safety, infrastructure, and defense.

I remember the debate on Obamacare when the Republicans argued that a public option would be the back door to single payer healthcare. They were right, but the reason they were right is that the public option could cost less than private insurance. We can’t have that! People need to keep buying insurance that is priced to cover huge profits and a wasteful billing system that is set up to limit your coverage. Not!

Define the enemies of our families

The right has done an excellent job of making the government the boogeyman. It is now our job to make the death merchants in the health insurance industry the enemy.

In a single payer, government-run system, the profit incentive disappears. You go the doctor, they give the best treatment, and the government pays the bill. Just like they pay for public safety, infrastructure, and defense.

What the Republicans and corporate Democrats fail to acknowledge is that private, for-profit insurance companies are the problem. The government currently spends around $10,000 per person on healthcare while people have premiums and co-pays they can’t afford.

In Canada, there are no premiums, no co-pays, and no deductibles, and they pay around $4,000 per person on healthcare. Everything is covered for less money.

I understand that Medicare is a popular program, so “Medicare for All” is the current slogan to replace terms like “single payer,” but it also muddies the water when you have to explain that we are calling for Improved Medicare for All. We are not calling for the current Medicare system. We don’t want people to have to purchase a separate prescription drug plan. We don’t want people to have to buy supplemental insurance to cover things not covered by Medicare.

Here’s how we cover everyone

We want everything covered for everyone, and the best way to do that is “single payer” healthcare. Our job should be to make people realize that’s what they want too.

Republicans are good at staying on-message and turning good ideas into dirty words. We need to do the same. We need to make greedy, for-profit insurance companies the boogeyman and convince people that the government can do a better job providing healthcare.

We also have to stop basing our policies on what people think is immediately achievable. Of course, single payer lacks the votes necessary in the current Congress. That doesn’t mean that single payer isn’t the issue that Democrats can run on and ride back into power.

I have yet to hear a better solution. It is time to stop saying it is not achievable right now. We must work to make it possible.