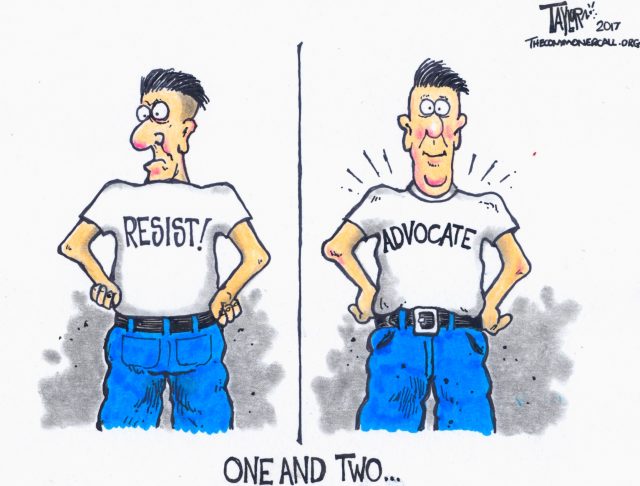 This explains why our country has drifted to the right; it explains why Democrats have gone from majorities in government at all levels in the 70’s, to barely holding onto a shrinking minority at any level. It explains why today’s Democrat is more conservative than yesterday’s Republican, and why a corporate friendly brand of neoliberalism has taken over what used to be the Party of the people.

We no longer live in a democracy, and our electoral choices are between corporatized Democrats or far right Republicans.

Even now, with Trump—who’s about as strategic as a six-year old on speed—the daily headlines are defined by what he’s doing, and how we’re responding to it.

Resistance, while necessary, is merely reactive.  Progressives need to start being proactive.

That means we need our own polestar to navigate by, and our own long game.  Fortunately, the blueprint has been laid out clearly for us by the conservatives.  So let’s examine, in broad strokes, how they succeeded in taking over the terms of debate in this country, so that we might emulate their success.

How conservatives conducted their “silent coup”

The broad elements of the conservatives’ strategy can be found in a 34 page memo by Lewis Powell to the Chamber of Commerce, dated August 23, 1971. The Powell Memo was not exactly a blueprint; rather it was a think piece about how to “strike back” against “un-American” influences coming from “…the college campuses, the pulpit, the media, the intellectual and literary journals, the arts and sciences, and from politicians.”

He repeatedly called for “balance” and “fairness” in these institutions.  Sound familiar?

To Powell, anything that constrained the free enterprise system was un-American, socialist, or—gasp!—Marxist, even if it was done to protect the environment, human health, or social welfare.

If “culture” is the collective beliefs, values, and practices that comprise a society, then Powell was taking direct aim at the institutions that defined culture from the 1930 to the late 1970’s.

A few rich families, operating behind the scenes and largely ignored by the press (particularly after corporations purchased most of it) took aim at the existing—and predominantly liberal culture—by doing essentially what Powell recommended and investing in the following six areas:

A cadre of ultra-rich conservatives, including the Koch brothers (and their father, who helped establish the John Birch Society) Richard Mellon Scaife, Adolph Coors Jr, Alice and Jim Walton, John Olin, Lynde and Harry Bradley, and Betsy DeVos (Trump’s Secretary of Education) poured billions of dollars into the effort, with each establishing multiple foundations and think tanks. Corporations also contributed to the effort.

They were spectacularly successful, as today we no longer live in a democracy, and our electoral choices are between corporatized Democrats or far right Republicans.

How Progressives can replicate the Right’s success

The three most important things progressives can do is:

Let’s start with messaging:  Face it, progressives don’t know how to communicate effectively with voters.  Whereas Republicans and conservatives talk in terms of values, progressives often have issue papers, complete with data, statistics and analyses.  Snooze alert.  If you’re talking about the results of an econometric model, while your opponent is discussing what it means to be an American or to practice Christian values, while simultaneously appealing to arch myths like self-reliance, and giving folks a bogeyman to blame for their misfortunes—you’re going to lose.

For example, Hillary Clinton was widely recognized as a “quick study” and “the smartest person in the room,” and her expertise was a big part of her campaign.  But she was never able to convince voters that she operated with a core set of values that benefitted them—something that now infects the entire Democratic Party.

Progressive values include fairness, equity, a level-playing field, compassion, justice, reverence for our planet and environment, and a genuine pursuit of peace, not war—all things which play extremely well in the hearts of Americans, not to mention in political polling. One of the reasons Sanders is the most popular politician in America is that he tapped into these values and put specific proposals into a broader-values based message.

It seems inconceivable that Democrats are refusing to embrace this broader, values based approach to politics—or it would if you didn’t understand that they’re afraid of losing campaign contributions.

What’s in the way are the Democratic Party members and leaders themselves, who benefit from the status quo.  That’s why the Democrat’s “Better Deal” equivocated on health care and campaign finance.

In truth, this isn’t only about simply training plutocratic puppies to speak in progressive soundbites, it must be about getting the plutocrat’s errand boys and girls out of the process and replacing them with genuine progressives and training them.

Case in point, each year, like clockwork, the Congressional Progressive Caucus develops a budget that cuts the deficit, retains and even expands social and health care programs, provides protection for the environment and human health, and establishes a more equitable distribution of wealth and income, all using strategies that enjoy broad popular support.  And every year it is roundly ignored, while Paul Ryan’s deficit-exploding, feed-the-rich, screw-the-working class Americans gets round the clock, front page coverage.

The Democratic Party ignores the budget, and so there’s no pressure on the media to cover it.  Conservatives, on the other hand, have a steady stream of white papers, press releases, “expert” spokespeople and academics ballyhooing their trickle down con, so it gets covered. If we created a counter-balancing progressive infrastructure the progressive budget would get covered, and if it got covered, people would back it overwhelmingly.

Taking back our public airwaves

Restore FCC rules requiring diversity and responsibility in the media: Until Reagan, the government maintained three critical positions on the media: first, that the airwaves were part of the public commons; second, that a license came with responsibilities to fulfill a public trust; and third, that the government had a right and a duty to assure that trust was honored.  The FCC accomplished this by assuring diversity of ownership both nationally and within markets (this applied to both print and broadcast media), requiring a certain amount of publically valuable content, and assuring that alternative points of view were provided.

These provisions prevented the formation of the kinds of philosophical monocultures we see in Fox News or MSNBC, and it served to make fake facts—the fuel that feeds the right—more transparent.  As a result, folks couldn’t tune out the “other side” the way they do now. Prior to Reagan, broadcasting licenses had to be renewed every 3 years, so the FCC had a big stick.

After Reagan, the licensing period was increased to five years, and after Clinton, the licensing period increased to 8 years, licenses were given away for free (losing some $70 billion a year in revenue), and it was more difficult for citizens to intervene in licensing decisions. Note the drift here, with the “liberal” Bill Clinton of the 1990’s being well to the right of the conservative Ronald Reagan of the 1980’s.

A Bill to restore the Fairness Doctrine, decrease licensing periods, allow for greater citizen input into renewals and to charge for airwaves would make it difficult for information monocultures that put people in fact free bubbles to exist.  It would also likely be popular with voters. For example, according to a Rasmussen pole [sic], a plurality of Americans supports measures that would restore the Fairness Doctrine and other controls on media. With an effective educational campaign, that number could easily be increased to a majority of voters.

Get the money out of elections and politics: There is widespread support for campaign finance reform, with some 77% favoring limits on spending.  Indeed, it is one of the few areas where Republicans and Democrats agree.  There is also strong support for legislation overturning Citizen’s United.  Similarly, Americans favor putting a stop to the revolving door between industry and government.

This should be an easy lift

What’s in the way are the Democratic Party members and leaders themselves, who benefit from the status quo.  That’s why the Democrat’s “Better Deal” equivocated on health care and campaign finance.

But that’s the point of a long-term strategy.  Taking on these issues and changing culture takes time.  As Lewis Powell said:

Exactly.  Progressives can build a progressive infrastructure to accomplish these tasks “27 dollahs” at a time.  Ironically, it will take a lot of money to get money out of politics and return the public forum to the public. But if the Democratic Party would look beyond its hood ornament, and embrace a long-term, values-based strategy, it would pay big dividends to the Party, the people, and the country.

If they won’t, it’s time to abandon them to their own, self-inflicted demise, and buy back the country ourselves—“27 dollahs” at a time, of course.

John Atcheson has just completed a book on the 2016 elections titled, WTF, America? How the US Went Off the Rails and How to Get It Back On Track, available from Amazon. Follow him on Twitter @john_atcheson