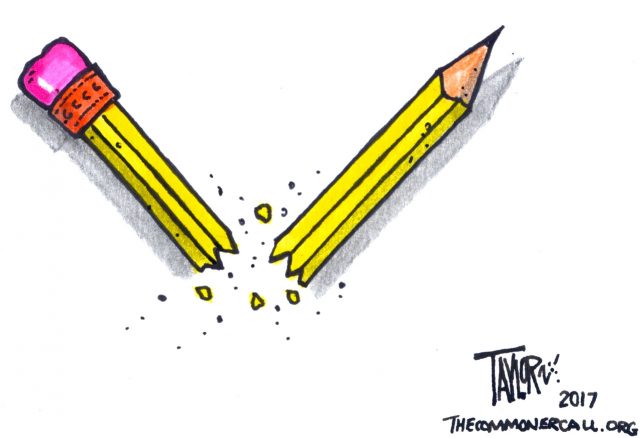 Attorney General Jeff Sessions announced on August 4 that the Department of Justice was “reviewing our policies affecting media subpoenas” as part of a broader crackdown on unauthorized leaks of information to the press.

Sessions suggested news organizations had endangered people’s lives by publishing stories based on leaked information, though he did not provide any evidence for this claim.

“We respect the important role that the press plays, and we’ll give them respect, but it is not unlimited,” he said at the press briefing. “They cannot place lives at risk with impunity. We must balance the press’s role with protecting our national security and the lives of those who serve in the intelligence community, the armed forces, and all law-abiding Americans.”

The current Justice Department guidelines were implemented in 2015, after extensive discussion between then-Attorney General Eric Holder and a coalition of journalism organizations and press freedom groups, led by the Reporters Committee for Freedom of the Press. They direct the Department of Justice not to subpoena journalists for information only as a last resort, and require the attorney general to personally approve any subpoena of a journalist or news organization.

The “advance notice” policy is a relatively recent addition to the guidelines. It was partly a response to concern that the Justice Department had secretly obtained journalists’ communications as part of its leak investigations.

In 2013, it was revealed that the Justice Department secretly obtained access to a Fox News reporter’s private email account, and to months of phone records belonging to the Associated Press newsroom, in an attempt to identify journalists’ sources.

If the Department of Justice makes it easier to subpoena journalists, then more journalists are likely to be threatened with jail time. The U.S. does not have a federal shield law, which means that reporters subpoenaed to testify about confidential sources in front of a federal grand jury must either comply — which means violating the promises of confidentiality they have to their sources — or risk being held in contempt of court and jailed.

Just when you thought Attorney General Jefferson Beauregard Sessions III couldn’t get any worse, he did. Sessions last week urged the White House to nominate a federal judge and former “tough on crime” prosecutor nicknamed (I’m not kidding) “Hang ’Em High” Henry Hudson to an independent, bipartisan panel that issues sentencing guidelines for federal crimes. Sessions’s recommendation is for one of three openings on the U.S. Sentencing Commission, which, during the Obama administration, recommended reductions in mandatory minimum sentences, especially for drug offenses, and which implemented an across-the-board reduction in sentences for nonviolent drug offenders.

More specifically, Sessions has ordered the Justice Department to urge the Commission to toughen sentences, especially for violent criminals, drug offenders, undocumented immigrant smugglers, and “career criminals.” We probably can all agree that sentences should be tough for those people using violence in the commission of a crime or for those involved in human trafficking. But reinstating harsh mandatory minimums for nonviolent and/or first-time drug offenders is a mistake.

Donald Trump and Jeff Sessions will control the Sentencing Commission in the next two months.

The problems with enhancing sentences for drug offenders and so-called career criminals are twofold. First, tough mandatory minimums simply don’t work to reduce the crime rate. That’s a proven fact. What does work, though, is rehabilitation and education, two things that are not found in the federal prison system. When a person does ten or twenty years (or longer) for a nonviolent drug offense, doesn’t learn a skill in prison, or even how to read, and then returns home at the end of his sentence, what does Sessions think he’ll do? He’ll sell drugs, of course. It’s the only thing he knows how to do. And in the meantime, the prisons are already full to bursting. The Bureau of Prisons accounts for a quarter of the Justice Department’s entire budget. And its only accomplishment is to keep people in chains.

So what is a career criminal?

Second, what exactly is a “career criminal?” According to the Justice Department, it’s any person with at least three arrests. It doesn’t matter what those arrests are for, though. Do you have a DUI or trespassing charge from college? Strike one. Have you been arrested for protesting at a federal facility? Strike two. Any other federal arrest is strike three. Not only are you elevated on the federal sentencing chart, giving you a longer sentence, you face a tougher mandatory minimum, and your sentencing judge is not permitted any leeway in that sentence. You’re treated the same way as somebody whose three crimes were murder, rape, and armed robbery. And remember, there’s no such thing as federal parole.

The U.S. Sentencing Commission has seven members, but three of those slots are vacant; two more become vacant on October 31. By law, three of the members must be federal judges and no more than four can be members of the same political party. It’s easy to get around that last proviso by simply naming a conservative Democrat or independent to the panel. The bottom line, though, is clear: Donald Trump and Jeff Sessions will control the Sentencing Commission in the next two months.

The only hope for holding off reimposition of the tough mandatory minimums that were lifted or eased during the Obama administration is through Congressional action. But don’t hold your breath. Neither Senate Majority Leader Mitch McConnell (R-Kentucky) nor House Speaker Paul Ryan (R-Wisconsin) has been able or willing to push an already-popular bipartisan sentencing bill to his respective floor for a vote. And even if they did, Donald Trump would veto it.

American Justice Works (For Those Who Can Buy It)

I spent 21 years behind bars for a crime I did not commit.

In 1980, I was living in Crown Heights, N.Y., and was convicted in the shooting death of a 16-year-old in the nearby Flatbush neighborhood of Brooklyn. I was 18, and was incarcerated despite persistent efforts by friend and fellow Trinidadian Carl King to secure my freedom. King is my hero. Most people in the system have no one like him fighting on their behalf.

The law enforcement officials in charge of the investigation had reason to know, even as they charged me, that the criminal justice system wasn’t working.

Demand for confessions and plea deals keeps young men of color and the poor from getting due process.

It was a new era of mass incarceration, and the police and prosecutors were empowered, as they still are, to detain young men of color, and to find a reason to charge them and lock them up. A system built upon rounding up suspects and demanding confessions and plea deals, in which the state has great power and the accused have little, is a system that does grave harm.

In 2001, someone else confessed to the crime. I was exonerated that February.

A thorough investigation would likely have prevented me from going to prison, but no one had a stake in sorting out my innocence. I didn’t have enough money to pay for a better defense, and consequently I was sentenced to 15 years to life.

Too often, the system doesn’t work for people who can’t afford to defend themselves.

After 15 years, I became eligible for parole, I was in my 30s and married to an incredible woman who, along with King, gave me the strength to endure this ordeal. I hoped to be set free. But to get parole, I had to admit to the crime and exhibit remorse. When I insisted upon my innocence, any consideration of parole disappeared. …