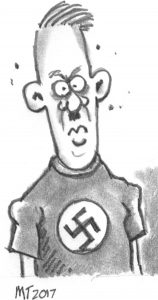 The groups that marched through Charlottesville last weekend with clubs, shields and cans of mace were clearly drawn from the most extreme and violent end of America’s far right. But key elements of the ideology of at least some of them echo themes that have animated populist groups across the political spectrum, including on the left.

In their chants and placards, the marchers were explicitly fascist, racist and antisemitic. One of their number is accused of murdering a leftwing activist with his car and injuring many more. They came prepared to do violence to leftists, whom they consider to be existential enemies. They weren’t shy about any of this, and the event was the crest of an extremist wave that has been swelling since well before Donald Trump’s inauguration.

But at the same time, some of the groups that marched evince a hostility to neoliberal capitalism, which is equal to that of the most ardent supporters of Bernie Sanders, the leftwing populist who mounted a vigorous challenge to Hillary Clinton during last year’s Democratic primaries – although for the far right it comes inextricably linked to a virulent racism. Many also support the enhancement of the welfare state.

In the wake of the Charlottesville protests, and as Trump’s presidency continues to melt down, it remains to be seen whether socialism, fascist-style, will retain its allure for so many resentful, violent young men.

For example, those marching under the red and blue banners of the National Socialist Movement (NSM) have signed up to a manifesto that supports a living wage, sweeping improvements in healthcare, an end to sales taxes on “things of life’s necessity” and “land reform” for “affordable housing”.

An establishing principle in the document written by their leader, Jeff Schoep, is that the state “shall make it its primary duty to provide a livelihood for its citizens”. It calls for “the nationalisation of all businesses which have been formed into corporations”.

The manifesto of Matthew Heimbach’s Traditionalist Worker Party calls for “opportunities for workers to have jobs with justice”. And in a manifesto issued on the day of the Charlottesville march, the noted far-right figurehead Richard Spencer wrote that “the interests of businessmen and global merchants should never take precedence over the wellbeing of workers, families, and the natural world”.

Spencer has previously spoken out – including at the American Renaissance conference, a gathering of far-right activists in Nashville in July – in favour of “single payer” universal healthcare.

At the conference, Spencer gave Trump just three out of 10 when invited to rate him – because he was “too focused on the Republican agenda” of tax cuts and dismantling Obamacare.

These critiques of capitalism and mainstream conservatism are key to the socialist element of national socialism. Observers of the far right argue that understanding this is essential to demystifying the far right’s appeal, especially to the alienated millennial men currently swelling its ranks.

Matthew Lyons is a researcher into far-right movements, and the author of one book on rightwing populism in the US, and another, recently published, on the alt-right. He argues that a lot of the “socialist” content in the ideology of movements such as the NSM is vague, and is at one level “a prime example of how the far right takes elements of leftist politics and appropriates them for their own purposes”.

But he adds that “there is a broad hostility to an idea of the capitalist ruling class”, within a “notion of capitalism centred on stereotypes of Jews”.

He talks of “a long tradition in Nazism and other parts of the far right of drawing a distinction between finance capital and industrial capital”, with the former, identified with Jews, being seen as “parasitic”.

This identification is apparent on the web pages of NSM, and – until the site was purged from the internet – on the website of Vanguard America, the group with which the alleged murderer James Fields marched in Charlottesville.

“Jewish finance” is consistently nominated as the principal enemy of these groups. Lyons explains that this distinction is an antisemitic variant on the ideology of “producerism”, which is common across the populist right and privileges the makers of tangible things over those engaged in more abstract pursuits. “They define industrial capitalists as ‘good’ capitalists, or even as workers,” he says, adding that this was how the noted antisemite Henry Ford described his role at the head of a giant auto manufacturer. …