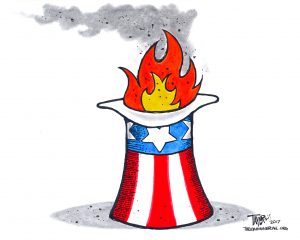 Steve Bannon ran, and is still likely pulling the strings at, Breitbart, the “Stormfront” in a business suit with a skinny tie. Bannon once characterized it as enabling what he called the “alt right,” by which he meant a slightly more presentable version of the skinheads, KKK, bikers, Neo-Nazis and other far right fringe supremacist groups that might appeal to today’s youth, including the educated.

Breitbart has been wildly successful, since conspiracy theories, race resentment, Islamophobia, misogyny and other base emotions have a visceral appeal.

I would argue that the success of the Neo-Neo-Nazis calling themselves “alt-” lies in an unconscious class dilemma that they displace onto race.

That is, not only must Trump dump Bannon, but so should the youth protesters who have been misled by Breitbart fake news. They should turn instead to a different challenger of the status quo, Bernie Sanders

Since the Reagan restructuring of the tax code in the 1980s and following on further such changes under Clinton and Bush, the United States is becoming. more and more unequal society. The top 1% owned 25 percent of the privately held wealth in the US in the 1950s. How much they own now is controversial but it is between 36% and 42%. The trend line is not in doubt. They take home 20% of the country’s income annually now, up from 10% in the 1960s.

Bannon and Breitbart are the purveyors of the ultimate false consciousness, the illusion of  white race oppression to hide from their dupes the reality, of class oppression.

These inequalities build up year after year. If 1% gets 20% this year and next year and the year after, after a while they will have it all.

The rich and government institutions in the US have for decades conspired to knock any realistic sense of class out of the American public. Workers making $21,000 a year, middle class families pulling down $40,000, and businessmen making a million dollars a year are all typically rolled up into “the middle class” in American political discourse. But the fact is that the top 10% or the top 1% or most importantly the top 0.1 percent benefit from a different set of policies than do working and middle class Americans.

Businessmen like few regulations and not having to pay fringe benefits, and very low taxes on business earnings and capital gains, so that even though they use the national infrastructure most intensively, the working and middle classes are made to pay for it.

If you want to understand why the Republican Party often sounds like it is on Mars, denying Climate Change, arguing that all problems can be solved by lower taxes, not wanting universal health insurance, etc., you have to understand that it represents the 1%, not the 99%. It lies to the 99% about standing up for the little guy, as Trump did. But look at their actual legislation to see whom they help and whom they hurt.

With Every Sneer, Liberals Empower Trump

Did I tell you Donald Trump is a vulgar, foul-mouthed, meat-faced, 71-year-old redneck buffoon? To be honest, he is a fossil-fuel guzzling, Big Mac-eating, pussy-grabbing, racist dick. He has hubris syndrome with paranoid narcissistic disorder. Do you read his tweets? The English is dreadful. How can a man run the country who is so uncouth, with that hair, those ties, those baggy suits? He is a Ba’athist generalissimo, the president of a banana republic. He is anti-Christ. There. Does that make you feel better?

All the above phrases are culled from a brief Google scan on the current American president. They reflect a melange of national shame, liberal trauma, snobbery and class hatred. They extend across the Atlantic and around the world. They assume two things. One is that Trump is so appalling it is inconceivable he could win a second term in office. The other is that deploying the same language as he did to win office is the best way to send him packing.

I hope the first is true, but I am not sure about the second. The comparison this week between Trump’s scripted and spontaneous reactions to the Charlottesville riot spoke volumes of his technique and his appeal. He failed to fully address the one aspect of the riot where attacking the left might have had traction, its Orwellian “history scrubbing” of the Confederate hero General Robert E Lee. Instead he used the occasion to denigrate the “alt-left”, and ramp up his appeal not just to the “alt-right” but to the silent right that, perhaps ashamedly, sympathises with it.

Trump and his supporters thrive on the venom of their liberal tormentors. The old maxim should apply: think what your enemy most wants you to do, and do the opposite.

Trump made it almost arrogantly clear that his formally scripted criticism of the right was merely to appease Washington’s “liberal elite”. He promptly erased it in the sort of street fight with the media that his followers love. Every time this happens, Fox, Drudge, Breitbart and his social media operators gleefully edit clips and feed them to his millions of supporters. A BBC documentary by Jamie Bartlettthis week showed how Trump may be a gastronomic and sartorial throwback, but he is a master at social media. The 1990s thesis that the internet would turn the world into one vast lovable, liberal community has never looked less likely than today. It plays into the hands of the political polarisers.

Trump’s approval rating is at a historic low for a first-year president of 34%. Republicans are almost as appalled by him as Democrats, since they fear he may lose them votes in next year’s mid-terms. This is even though they have not done badly in recent byelections. Hence the two former Bush presidents issuing a joint statement denouncing racism. The basis of Trump’s second-term appeal is already emerging: the tried and tested technique (see Margaret Thatcher) of taking on his own government and keeping up the fight.

Eliminating Trump will depend not on making liberal America feel good, but on detaching him from the bulk of his conservative support. The battle will not be for the elusive centre of American opinion, an entity that political scientists such as Jonathan Haidt and others have declared non-existent. It will be over a group that both Trump and the failed Democratic candidate Bernie Sanders identified as the white working class, urban as much as rural. Sanders did astonishingly well, given his socialist credentials.

Forty-two per cent of American adults are classified as white working class. For two decades they have seen incomes shrink in favour, as they see it, of welfare recipients, “identity groups”, graduates and the rich. Defining them as racist xenophobes and “deplorables”, as did Hillary Clinton, when they craved jobs and income security, was a sign of the “class cluelessness”, analysed by Joan Williams in the bestseller White Working Class. Written like a Victorian explorer encountering unknown tribes on the Congo, it has joined JD Vance’s Hillbilly Elegy in charting the origins of Trump’s appeal.

These people made up the bulk of the 63 million who voted for Trump. Insulting him insults them. When the insults carry a tinge of cultural, intellectual and class superiority, they bite deep.  …