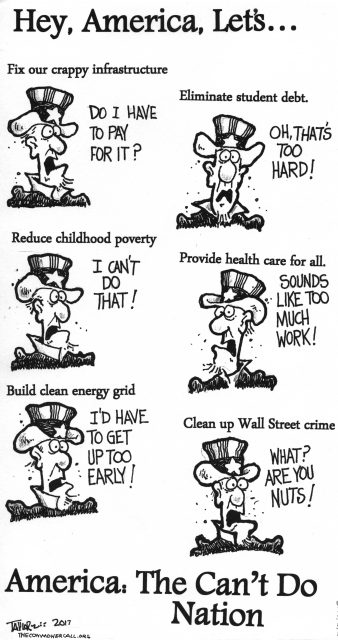 When Sen. Cory Gardner (R-Colo.) took the stage at a scheduled town hall on Tuesday in Greeley, Colorado, he apparently didn’t expect to be confronted by a crowd full of enthusiastic supporters of single-payer healthcare.

Angry with his support for legislation that the Congressional Budget Office estimated would strip healthcare from more than 20 million American, Coloradans greeted Gardner with jeers as he arrived at the event.

At one point during the discussion, Gardner asked how many in the audience supported single-payer healthcare.

Judging by recent polls, the Colorado senator’s view runs counter to that of a growing majority of Americans. As Common Dreams has reported, the fight over Trumpcare has convinced many Americans—including a significant percentage of Republicans—that single-payer healthcare is the best way to move beyond the current for-profit system.

A recent Associated Press/NORC poll found that 62 percent of Americans believe it is “the federal government’s responsibility to make sure that all Americans have healthcare coverage.”

“You just told us you stood for things like not cutting Medicaid and not cutting pre-existing conditions, we asked you to stand your ground and vote your principles and you did not” – Dr. Erin Egan.

This growing support for universal healthcare has been evident at town halls and demonstrations across the country, as thousands have organized and pushed back against the Republican Party’s efforts to cut Medicaid, defund Planned Parenthood, and kick millions off their insurance.

Voters used Gardner’s decision to hold town halls—a move that makes him unique among his Republican colleagues, many of whom have gone out of their way to avoid facing their constituents throughout the healthcare fight—to express their disapproval of Gardner’s support for Trumpcare.

Colorado resident Lindsey Lewis, who says she voted for Gardner, told Colorado Public Radio that President Donald Trump and Republicans “need to understand that it’s not an individual’s fault if they can’t afford healthcare. They seem to think we’re doing something wrong if we need Medicaid.”

“Just in general, the stuff Colorado stands for, I feel like Trump and Republicans don’t anymore,” Lewis concluded.

Doctor takes on the congress critter

In one of the more heated exchanges of the day, Erin Egan—a doctor who said 20 percent of her patients are on Medicaid—took Gardner to task for his support for a measure that would drastically cut Medicaid.

“You just told us you stood for things like not cutting Medicaid and not cutting pre-existing conditions, we asked you to stand your ground and vote your principles and you did not,” Egan said.

Another resident slammed Gardner for the GOP’s secrecy and its exclusion of women from healthcare negotiations.

Hoping to harness surging public support for single-payer healthcare, Sen. Bernie Sanders (I-Vt.) is planning to introduce Medicare for All legislation when Congress returns from recess in September.

“The insurance companies, the pharmaceutical industry, the medical equipment manufacturers, Wall Street, and everyone else who profits off of our current system will spend hundreds of millions of dollars telling us how terrible that idea is, telling us that we can’t accomplish what every other comparable country on earth has done,” Sanders wrote in The Guardian on Monday. “But the American people know better. They want to go forward.”

Link to Story and Video Clips

(Commonr Call cartoon by Mark L. Taylor, 2017. Open source and free to use with link to www.thecommonercall.org )