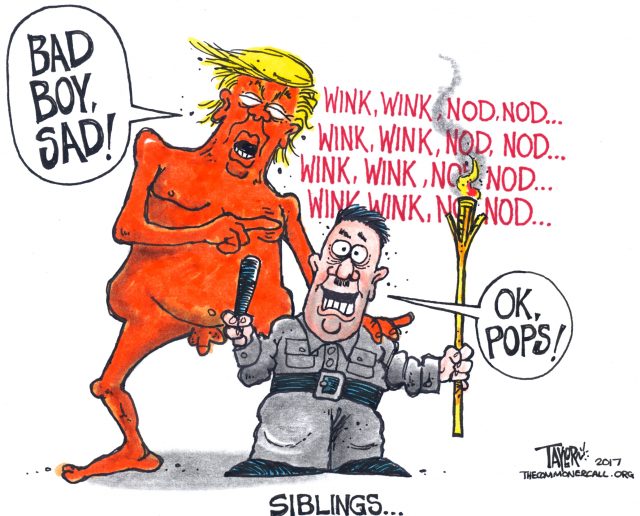 “The statement today was more Kumbaya nonsense,” Spencer said, speaking to reporters in his office and part-time home in Alexandria, Virginia. “He sounded like a Sunday school teacher. I just don’t take him seriously … it sounded so hollow and vapid.”

Trump’s statement Monday was technically his most direct denunciation of white supremacy in the wake of violent protests in Charlottesville, Virginia, over the weekend that left three dead and at least 35 injured. But for a president who is quick to tweet against any perceived slight, the statement arrived noticeably late ― and only after he faced bipartisan criticism for vaguely condemning violence “on many sides.”

Although he has some policy differences with the president, Spencer said, “we were connected with Donald Trump on this kind of psychic level.” – Nazi leader Richard Spencer

Spencer, who was a prominent attendee at the Charlottesville rally, invited reporters to a news conference Monday to address the incident. He initially tried to host the press event at two hotels in Washington, D.C., but they both canceled his reservation, according to Spencer. (He said he used his real name.) Reporters were instead instructed to go to a street corner in Old Town Alexandria.

A man who worked with Spencer and who gave a pseudonym, Reinhard, beckoned reporters upstairs to a makeshift office. The liquor cabinet was stocked with Cutty Sark whiskey and Bombay Dry Gin, the bookcase stacked with The Bell Curve: Intelligence and Class Structure in American Life, the German philosophy book Nietzsche’s Teaching: An Interpretation of Thus Spoke Zarathustra, a blow-up doll of what appeared to be Pepe the Frog (a character co-opted by white nationalists) and a “Make America great again” hat. There was also a “We the People” diversity poster propped on a windowsill.

The office appeared to be begging for respectability. …

And here is what former Ku Klux Klan leader David Duke had to say about Trump’s Tuesday non-apology in which he equated George Washington and Thomas Jefferson to criminal traitors and blaming of the victims in Charlottesville: “Thank you President Trump for your honesty & courage to tell the truth.”

Donald Trump the neo-Nazi sympathizer has achieved what Donald Trump he president has singularly failed to do: unite the nation.

An immensely fractured country – riven by race, class, culture and politics – finds itself transfixed by one grotesque display of empathy for violent racists. These are the same violent racists whom White House aides previously called, in remarks that Trump read out loudly and very carefully: “criminals and thugs.”

But that was so Monday. One short day later, the leader of the nation – that daily proclaims its commitment to liberty and justice for all – declared there were “very fine people” in Charlottesville, who simply joined a neo-Nazi rally to protest about a statue.

There is no excuse for standing on the sidelines in silence. Those who speak out deserve some praise for doing the right thing, if only to remember what the right thing looks like next month, when Congress returns.

“You had a lot of people in that group that were there to innocently protest, and very legally protest – because I don’t know if you know, they had a permit,” Trump helpfully explained to the astonished press corps at Trump Tower. “The other group didn’t have a permit. So I only tell you this: there are two sides to a story.”

Sadly for Trump, there is only one side to the political reaction to his comments: sheer disgust. As an apologist for racist protestors – even though they obtained a precious permit – Trump has magically created a sense of spine in his own Republican party.

This is something of a biological miracle because people like Marco Rubio, his vanquished former rival – the man he used to deride as little Marco – was previously classified by entomologists as an invertebrate.

“Mr President, you can’t allow #WhiteSupremacists to share only part of blame. They support idea which cost nation & world so much pain,” tweeted the Florida senator. “The #WhiteSupremacy groups will see being assigned only 50% of blame as a win. We can not allow this old evil to be resurrected.”

Even in the abbreviated hashtag world of tweets, this counts for something. No doubt, Rubio will return to his spineless state when the next vote comes around. No doubt, he and his fellow Republicans in Washington will later excuse the abuse of a nation as the drunken talk of an otherwise good-hearted man. …