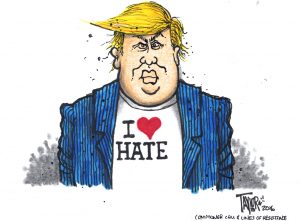 The explosion at the Dar Al-Farooq Islamic Center in Bloomington, Minn., took place Saturday morning. While no one was injured after an explosive was thrown through the window of the imman’s office, Mohamed Omar, the center’s executive director, said Sunday: “We feel like it’s much deeper and scarier than like something random,” adding, “It’s so scary.”

Gov. Mark Dayton, for his part, called the attack “an act of terrorism,” and said the damage done to “this sacred site is just unthinkable, unforgivable.”

“Hate is becoming too prevalent in our society. It spreads on social media and infects our discourse. We must counter it with love and the values we hold so dear.” – Rep. Keith Ellison

Speaking to the Associated Press, Ellison, said, “The President’s failure to condemn the terrorist attack on the Bloomington Islamic Center is an outrage. It suggests that his oath to protect and defend the Constitution of the United States, including the right to equal protection under the law, only extends to people who meet certain racial and religious criteria.”

Also weighing in on the president’s silence is Asad Zaman, director of the Muslim American Society of Minnesota. “We are wondering why President Trump has not tweeted about this. He seems to want to tweet about security and terror issues,” he  said to BuzzFeed News.

In the wake of the attack, Ellison said, “Hate is becoming too prevalent in our society. It spreads on social media and infects our discourse. We must counter it with love and the values we hold so dear.”

According to the Council on American-Islamic Relations (CAIR), the number of anti-Muslim hate crimes in the first half of 2017 has spiked 91 percent as compared to the same time period in 2016. The group also warns that if the trajectory continues, 2017 is set to be the worst year on record for anti-Muslim bias incidents.

The FBI is investigating the attack.