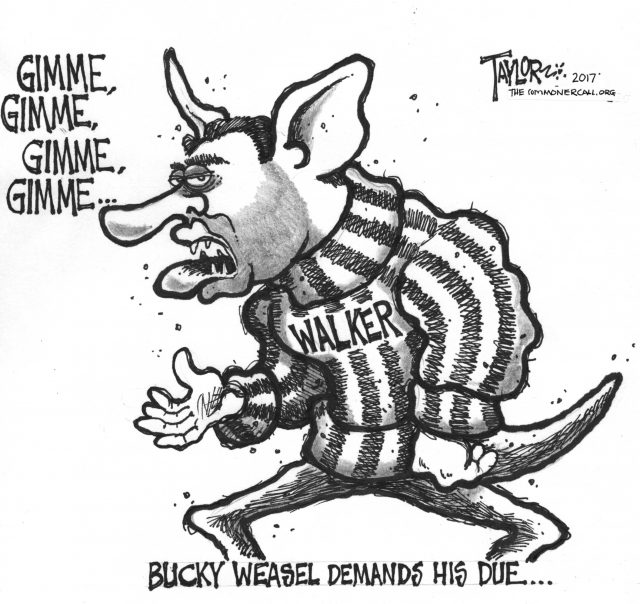 If Scott Walker were a fiscal conservative, he would be ashamed of himself.

But Walker is not a fiscal conservative. And he has no shame, as Wisconsinites who know how their tax dollars are spent are rapidly discovering.

Walker, who has claimed over the years that the state is too impoverished to adequately fund public education, public services and roads, has suddenly determined that Wisconsin has an extra $3 billion to hand off to a controversial multinational corporation that is famous for making big promises to nations and states and then failing to deliver.

How is this possible?

Easy. Walker is running for re-election and, as a career politician, he is perfectly happy to sacrifice fiscal responsibility on the altar of his own ambition. Never mind that, in doing so, he embraces precisely the sort of crony capitalism that sincere conservatives have long decried.

“Voters might wish to ask just why each Wisconsin household is stuck with a nearly $1,200 bill to subsidize a company that is half as productive as Wal-Mart, and one-tenth as productive as Harley-Davidson.”

It could be that the Taiwanese technology firm Foxconn really will build a sprawling factory in Wisconsin and hire thousands of workers. But the deal that Walker wants Wisconsin taxpayers to fund—a $3 billion giveaway package in return for the promise that a $10 billion plant will be developed in the southeastern corner of the state—is so bad that the Bloomberg View business editors label Walker’s approach “generally an awful way to lure jobs.”

“In short,” they editorialized last week, “Wisconsin’s plan is likely to help a few people in an unpromising industry find temporary work before they’re displaced by technology—and to do so at the expense of everyone else in the state.”

Not just a bad deal

That isn’t just “a bad deal,” argues Michael Hicks, director of the Center for Business and Economic Research at Indiana’s Ball State University. “It is an over-the-top bad deal for Wisconsin.”

In an analysis published by MarketWatch, Hicks explained: “In a market economy, companies taking risk and hiring workers is a necessary ingredient to prosperity. That is not what is happening here. Foxconn bears no meaningful risk in this deal. All the risk and all the labor costs for the next decade and a half are borne by the beleaguered taxpayers of Wisconsin.”

If Walker were some kind of economic development genius, his defenders could make a case that he knows more about these kinds of things than Hicks, a distinguished professor of economics who specializes in state and local public finance and the effect of public policy on the location, composition and size of economic activity.

But Walker is the guy whose 2016 presidential campaign collapsed when Republican primary rival Donald Trump detailed his failures—”I mean, Walker’s state, Wisconsin, is a catastrophe from an economic and a financial standpoint…”

Now Walker is running for re-election and he is so desperate for a job-creation “win” that he’s not bargaining. He’s giving away the store.

Hicks suggests: “Voters might wish to ask just why each Wisconsin household is stuck with a nearly $1,200 bill to subsidize a company that is half as productive as Wal-Mart, and one-tenth as productive as Harley-Davidson.”

(Commoner Call cartoon & photo by Mark L. Taylor, 2017. Open source and free to use with link to www.thecommonercall.org )